The White House has conceded it is “not going to control the pandemic” as it faces another staff outbreak nine days from the US election.

Three weeks after President Donald Trump and members of his inner circle contracted coronavirus, five staffers working for Vice-President Mike Pence – including his chief of staff – have also been diagnosed with COVID-19. 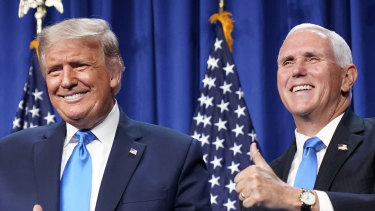 Donald Trump and Mike Pence at the Republican convention.Credit:AP

Pence and his wife Karen say they have tested negative, and the Vice-President will keep campaigning across the US for the final stretch of the race rather than self isolate.

But as cases continue to soar in most states, White House chief of staff Mark Meadows revealed today that the Trump administration was not aiming to control the virus, and instead was focusing its efforts on the development of a vaccine to stop the spread.

The comments were seized on by Democrats, because it contradicts the message Trump repeatedly spruiks on the campaign trail: that the US is “rounding the turn” on the virus and that the President has COVID-19 under control.

On social media, a Tweet posted by Democratic nominee Joe Biden exactly one year ago also went viral again this morning, in which the former vice president wrote: “We are not prepared for a pandemic. Trump has rolled back progress President Obama and I made to strengthen global health security. We need leadership that builds public trust, focuses on real threats, and mobilises the world to stop outbreaks before they reach our shores.”

The Tweet was posted months before the US experienced its first case of COVID-19 in January. Today, more than 225,000 Americans have died, a further 8.6 million cases have been confirmed, and millions have lost their jobs in the pandemic-fuelled recession. 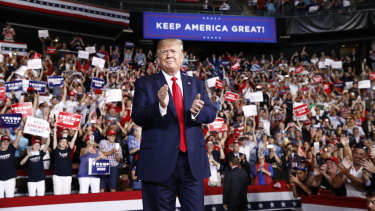 Donald Trump, pictured at a campaign rally in New Hampshire earlier this year.Credit:AP

With hospitalisations surging in recent weeks, health experts have warned of another devastating wave unless there is major effort to mitigate the spread of the virus. At the end of last week, the US recorded almost 84,000 cases in a day, smashing the previous single-day record of 77,362 cases recorded in mid-June.

Trump, however, has continued to conduct jam-packed rallies across the country that some fear could turn into super-spreader events, similar to the White House ceremony last month where multiple members of the president’s inner sanctum were infected.

Those in Trump's orbit who have so far been diagnosed with COVID-19 include First Lady Melania Trump, their son Barron, campaign manager Bill Stepien and press secretary Kayleigh McEnany.

According to the New York Times, at least three top aides to Pence, include chief of staff Marc Short, have now also tested positive.

Despite the latest outbreak, the President once again downplayed the impact of the virus at a rally in New Hampshire. Instead, he claimed that Biden would reverse America’s “economic comeback” if he was elected and described the Democrat a “shutdown candidate” – suggesting that Biden would impose lockdowns in order to stop further outbreaks.

Biden, however, has repeatedly said he does not wish to shut down the economy, but would work with states to create a national mask standard; provide schools and businesses with clear guidelines to reopen; and improve testing and contact tracing, both of which have been ad hoc across the US.

Trump’s COVID strategy focuses largely on fast-tracking a vaccine in record time under Operation Warp Speed: a public-private partnership set up by his administration in May as the cases began to skyrocket as the states rushed to reopen.

The White House also banned travel from China earlier this year, and set up a coronavirus task force, led by Pence.

At a rally in North Carolina today, Pence told supporters: “President Trump's decision to suspend all travel from China saved untold American lives and bought us invaluable time to stand up the greatest national mobilisation since World War Two.”

"We are just a short time away from having the first safe and effective coronavirus vaccines in tens of millions of doses for the American people,” he said.

Our weekly newsletter will deliver expert analysis of the race to the White House from our US correspondent Matthew Knott. Coming soon. Sign up now for The Sydney Morning Herald's newsletter here, The Age's here, Brisbane Times' here and WAtoday's here.

Goodbye, Dad Buba Diop. Thanks to you, I lived the most memorable tournament of my childhood
Nuno about 2:1 with Arsenal: We played amazing, very proud. Jimenez recovered
Arsenal scored 13 points in 10 opening matches - the worst result in 39 years
West Brom can be bought by us investors. The Chinese owner of the club wants 150 million pounds
Lampard on Mourinho's words about ponies: You have Kane, Son, bale and alli. We are all fighting to win the Premier League
Mourinho on winning the Premier League: Tottenham are not in the race, because we are not a horse, but a pony
Laurent Blanc: I will return to football, but in children's. Now coaches are being asked to increase the cost of players, I don't like it
Source https://www.smh.com.au/world/north-america/white-house-says-it-won-t-control-the-pandemic-as-more-senior-staffers-test-positive-20201026-p568kg.html?ref=rss&utm_medium=rss&utm_source=rss_feed