In the eight months since China first alerted the World Health Organisation about a new pneumonia emerging in Wuhan, more than 18 million people have been infected by the disease known as COVID-19 and the global economy has been up ended.

The first case and the first death outside of China occurred in south-east Asia - in both instances, tourists from China who had travelled to Thailand and the Philippines respectively. 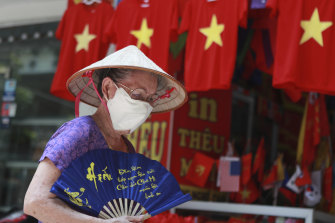 A woman walks past a row of T-shirts printed with Vietnamese flags in Hanoi. For 99 days, Vietnam seemed to have defeated the coronavirus, but now a new outbreak in the city of Da Nang has grown to dozens of cases in six cities.Credit:AP

But south-east Asian nations' handling of the virus has varied wildly, from out-and-out suppression (Thailand, Malaysia, Vietnam) and initial suppression followed by a big second wave (Singapore), through to disastrous (Indonesia and the Philippines).

The extremely low infection rates of Cambodia, Myanmar and Laos are treated with suspicion by some observers — each country has reported fewer than 400 cases — while others argue the low numbers reflect high levels of citizens' compliance.

What happens in Australia's near-neighbours matters tremendously. The economic impact of the virus, which has smashed international tourism and trade, closed borders, cost tens of millions of jobs and will potentially send millions into poverty in our region are only just beginning to be felt. The effects will last for years to come.

So why have some countries done so much better than others? 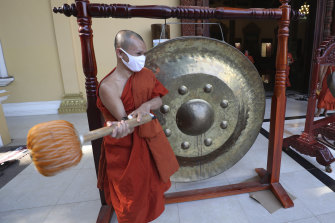 A Buddhist monk strikes a gong at a pagoda in Phnom Penh, Cambodia, to chase away the virus at the start of the pandemic.Credit:AP

Jeremy Lim, an Associate Professor in the school of public health at the National University of Singapore says there are four "Bs" — biology, behaviour, bureaucracy and bytes — that determine how rapidly the virus does, or does not, spread in a country.

"It's the same virus around the world, so the biology is more or less the same. The quality of bureaucracies around the world is vastly different. This has nothing to do with authoritarian or democratic governments, for every case in point there is a counter-factual," he says.

'You don’t need many idiots – just a handful – and the [infection] numbers can jump rapidly.'

A competent bureaucracy goes hand-in-hand with being able to ramp up testing, adequate healthcare, and the ability to mobilise a whole-of-government response.

"On behaviour, safe distancing and masks are very pertinent. If nothing else the pandemic has taught us biology is the easy part, behaviour is much harder to manage," Lim says.

"The pandemic caught the world at a point where we probably have never been so polarised, where people think they are not just entitled to their opinions but also their facts. You don’t need many idiots – just a handful – and the [infection] numbers can jump rapidly."

Bytes, for Lim, means a country's ability to use technology - in labs and hospitals, and outside them with the rollout of contact tracing apps - to fight the spread of the virus and save lives.

Taken together, these four Bs have played a key role in determining the spread of the virus in each of these countries, Lim says.

Looking at country-by-country situations, the thesis stacks up. Singapore, Thailand, Vietnam and to an extent Malaysia locked down hard and early. Thailand and Singapore have strong health systems too, with Malaysia's not far behind — they have tested widely, in particular Singapore, which is slowly getting its second wave of infections in the dorm rooms of migrant workers under control.

Vietnam, which is a one party communist state, is less affluent but has a culture of compliance from its population, while the other three nations' political scenes feature relatively strong or even authoritarian governments. All four have had experience handling a pandemic before, too.

The contrast with Indonesia and the Philippines is stark - these two nations have more than 100,000 infections, poorer healthcare systems, more densely packed cities and lower testing rates (particularly in Indonesia).

"Both the Philippines and Indonesia have been tremendously resource-constrained. To be fair, both countries are archipelagic and have a much tougher time in co-ordinating responses across thousands of islands. From a structural point of view, Indonesia and the Philippines already have the odds stacked against them."

There's another reason why Australia should care about the spread of the virus in the region: geo-politics.

In the months and years ahead countries will be desperate for foreign capital and investment to re-start their economies. In this, China could play an out-sized role that over time could further re-shapes the region and encourages an already emerging trend that should also concern Australia.

Richard Maude, a Senior Fellow at the Asia Society Policy Institute, describes the trend like this: "it's pretty clear that at least in some parts of south-east Asia the pandemic has given additional impetus to a pre-exiting trend of democratic regression and illiberalism".

This has manifested in new emergency laws that give broad powers and are capable of being misused, not just for public health response. It's also been apparent in the use fake news laws for information control and a militarised response to the pandemic in some countries.

Maude says there is no clear pattern across Asia that shows whether democracies or illiberal governments are better suited to handling a pandemic.

"That’s an important conclusion as China is happy to draw a comparison with its response and that of the US. It does so to argue that democracies are inherently less effective forms of government as compared to the Chinese model of a one-party state."

However, "nobody and no system has proved infallible" in facing down the coronavirus.

James Massola is south-east Asia correspondent based in Jakarta. He was previously chief political correspondent, based in Canberra. He has been a Walkley and Quills finalist on three occasions, won a Kennedy Award for outstanding foreign correspondent and is the author of The Great Cave Rescue.

It's time to learn the names of new Borussia heroes. Now there are 17-year-old boys making goals
Paulo Fonseca: it's Important to bring Smalling back to Roma. We have only 3 Central defenders
Arteta about 2:1 with West ham: Arsenal made life difficult for themselves with losses, but they fought and believed in victory
Palace midfielder Townsend: Could have beaten Manchester United with a bigger difference. We had moments
Philippe Coutinho: I am motivated and I want to work hard to make everything work out well on the pitch
Torres on Chelsea: I Thought I could remain a top player, but I was unstable. Although there were enough successes
Neville on the broken penalty against Manchester United: an Absolute disgrace
Source https://www.smh.com.au/world/asia/why-some-countries-are-surging-and-others-slumping-in-pandemic-20200805-p55iv4.html?ref=rss&utm_medium=rss&utm_source=rss_feed