Woman released by police after boy, 3, killed in hit-and-run

A 73-year-old woman who handed herself in to police following a hit-run collision that killed a young child in Melbourne’s west has been released.

Three-year-old Ethan Nguyen died at the Royal Children’s Hospital on Thursday night after suffering critical head injuries when he was hit by a car on McIntyre Road, in Sunshine North. 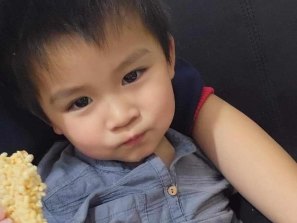 Ethan Nguyen, who was hit and killed by a car in Sunshine North.

The woman, from Heathcote Junction in Melbourne’s north, handed herself in about 9.20am on Friday morning after police issued a public appeal for help finding the driver.

The 73-year-old was questioned by major collision detectives on Friday morning but was released several hours later pending further enquiries.

“The investigation into the collision remains active and ongoing,” police said.

On Friday, Superintendent John Fitzpatrick said the woman had been driving a red Toyota Camry sedan, which had damage to the right-hand side of the bonnet.

“Having a quick look at the vehicle it is pretty evident that you would know that you hit something. But whether that driver knew that they had hit a child is something that is yet to be determined,” he said. 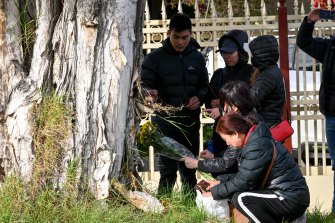 Friends and family mourn the loss of Ethan Nguyen on Friday near the scene where the three-year-old boy was hit by a car the night before.Credit:Eddie Jim

Fitzpatrick said the young boy had been dragged under the car between 20 and 30 metres.

“The actual distance is yet to be determined, but that child certainly has been dragged under the car for some distance,” he said. 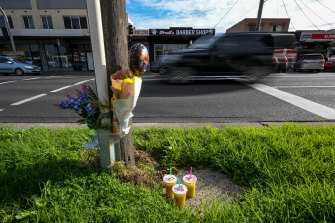 The scene of the fatal collision on McIntyre Road.Credit:Eddie Jim

Vuong was among at least seven family members who visited the scene in Sunshine North on Friday. They taped a photo of Ethan to a tree and left other tributes at the roadside, including a Spider-Man balloon, cups of bubble tea, flowers and incense sticks.

He said he saw the boy run from a premises opposite the barber shop towards the northbound vehicle.

“I was finished with a customer and then my business owner said, ‘Stop, stop, stop’,” Alyoshik said.

“This road is a very dangerous road.”

Other business owners said there had been accidents involving pedestrians along the shopping strip in the past.

“It is a busy road and we do have accidents,” Smith said.

Detective Acting Sergeant Leigh Miller told reporters at the scene on Thursday night that Ethan’s mother was collecting her son from a childcare centre moments before the incident occurred.

On Friday morning, Fitzpatrick said investigators had confirmed Ethan was walking with his mother and broke free before attempting to cross the road.

“The mother is beside herself with grief,” he said.

“The family is absolutely overwhelmed with the death of that young child. We’ll provide them with all the support and welfare that they need from our perspective, but they currently have family and friends around them.

“But as you can imagine losing a beautiful young child like that is going to be devastating.” 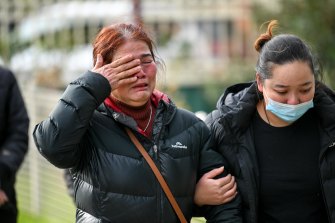 Friends and family of Ethan Nguyen have been overcome with grief since the boy died overnight.Credit:Eddie Jim

Fitzpatrick said police did not believe speed was a factor in the incident.

“That particular part of the road last night, it’s not particularly well lit,” he said. “But driving a motor car on the road, it’s a dual responsibility, so everyone needs to be aware of what’s around them.”

The young boy’s shoe could be seen on the road as police examined the area on Thursday night.

Miller said it would be used to help determine the speed at which the car was going when it struck the boy.

“These sorts of collisions, sometimes they bring out the worst and the best of people. People have stopped today to help [because] they’ve seen a child on the road. That’s humanity,” Miller said.

Anyone who witnessed the incident, has dashcam footage or any other information that could help police is urged to phone Crime Stoppers on 1800 333 000 or submit a confidential report online at www.crimestoppersvic.com.au.

If you are troubled by anything in this story, you can contact Lifeline on 131 114.