Melbourne’s Orthodox Jewish Yeshivah Centre has the chance to avoid a potential $2.5 million damages claim if a rabbi who sits on its board says sorry to a victim of historic sexual abuse and resigns from his position.

The man behind the Supreme Court of Victoria action, who cannot be named for legal reasons, told The Age he would settle his claim if Yeshivah director Rabbi Chaim Tzvi Groner apologised for the abuse he and others suffered at the St Kilda East school and nearby facilities. 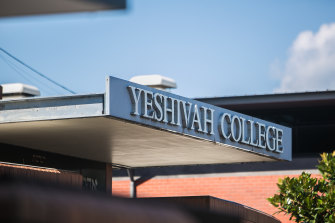 Yeshivah College is one of the Yeshivah Centre's schools.Credit:Scott McNaughton

The man said his offer to withdraw the claim was also contingent on Rabbi Groner, a long-standing Yeshivah Centre board member, quitting his board post to demonstrate that the centre’s leaders accepted the gravity of the failure to keep children safe.

If the man’s claim is successful, his demand for $2.5 million in damages for his alleged repeated abuse as a 12-year-old by convicted paedophile David Cyprys would be among the highest ever awarded against an institution in Victoria.

The man has been diagnosed with post traumatic stress disorder and a persistent depressive disorder, with psychiatric reports referenced in his statement of claim attributing them to the abuse he suffered as a child.

Though there is no suggestion Rabbi Groner was aware of the abuse at the time it occurred, he has been a trustee of the Yeshivah Centre for decades and is ranked among the most senior representatives of the Chabad Lubavitch movement in Australia. 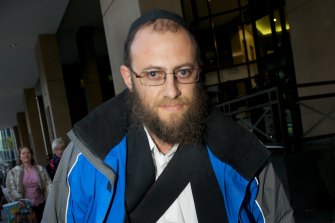 His late father, Rabbi Yitzchak Groner, was found by the Royal Commission into Institutional Responses to Child Sexual Abuse to have enabled predatory acts against children in the care of the Yeshivah Centre to continue.

The commission described the late rabbi’s response as a “pattern of total inaction”. His son did not respond to a request for comment.

The man behind the legal claim said although it had been made clear to the Yeshivah Centre that he would “walk away” if he received a genuine apology and action at board level, there was no indication as yet that either would happen.

Sources familiar with the legal case said the Yeshivah Centre insurers had indicated they would not be accepting liability for the claim. This would leave the centre potentially financially exposed.

The centre is also fighting three insurers in separate Supreme Court proceedings, seeking indemnification for earlier payouts made to two other abuse victims.

Yeshivah schools have signed up to the Commonwealth’s National Redress Scheme. But related entities where children were also sexually abused have yet to do so.

Earlier this year, another Cyprys victim, abuse campaigner Manny Waks, was awarded $804,170 in damages in a civil case against Cyprys.

Mr Waks was aged 13 when he was abused by Cyprys at the Elwood synagogue and then at the Chabad Yeshivah centre in Melbourne.

Cyprys was a security guard, caretaker, martial arts instructor and locksmith within the Yeshivah Centre. He also ran youth camps.

In 1992, Cyprys pleaded guilty to an indecent assault against a child and received a good behaviour bond, with no conviction recorded. He went on to re-offend and was jailed in 2013 for the abuse of several children.

He was arrested by police after his release on parole in October last year and is facing further historic abuse charges in New South Wales.

Messi is in Barca's bid for the Cup game with Rayo Vallecano. Dest will not play due to muscle problems
Gerrard on Lampard's resignation: Chelsea have a history in this matter, so no surprises
Golovin about the nickname Tsar: Nothing more than a joke. This is necessary for the media and fans, but I am a football player
David De Gea: I try to be a leader for Manchester United. I have the experience of winning big titles here
It feels like we've been working together for 10 years! Chelsea stars say goodbye to Lampard
Bayern Munich have signed former Basel striker Oberlen
Tuchel will sign a contract with Chelsea for 1.5 years (David Ornstein)
Source https://www.smh.com.au/national/victoria/yeshivah-abuse-victim-will-drop-2-5-million-lawsuit-if-apology-made-20201120-p56gj4.html?ref=rss&utm_medium=rss&utm_source=rss_national