We have made our live blog of the coronavirus pandemic free for all readers. Please consider supporting our journalism with a subscription.

Geneva: Young people who are hitting nightclubs and beaches are fuelling a rise in fresh coronavirus cases across the world, with the proportion of those aged 15 to 24 who are infected rising three-fold in five months.

World Health Organisation analysis of 6 million infections found people aged between 15 and 24 represented a 4.5 per cent share of COVID-19 cases on February 24 compared with 15 per cent on July 12. 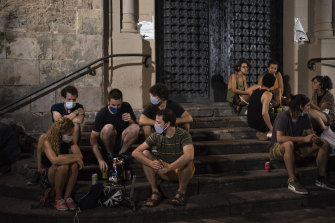 Barcelona's bars and clubs have been restricted, but young people are gathering in the streets instead.Credit:AP

In addition to the United States, which leads a global tally with 4.8 million total cases, Spain, Germany, France and Japan have all said that many of their newly infected are young people.

"Travel increases your chances of getting and spreading COVID-19," she said, adding young people are more likely to go to work in the community, to a beach or the pub, or to buy groceries.

Even countries such as Vietnam, widely praised for its mitigation efforts since the coronavirus appeared in late January, are battling new clusters of infection.

Among those aged 5-14 years, about 4.6 per cent were infected, up from 0.8 per cent between February 24 and July 12, the WHO said. The analysis coincides with concerns from public health experts over the reopening of schools.

Anthony Fauci, the leading US expert on infectious diseases, urged young people last month to continue to socially distance, wear masks and avoid crowds, and cautioned that asymptomatic people could spread the virus.

Ireland on Tuesday announced a fresh delay to the full reopening of bars, putting off a move to the final stage out of lockdown by three weeks while also tightening travel restrictions after new COVID-19 infections more than doubled in a week.

"I know that this will come as a blow to pub owners and I want them to know I have enormous sympathy for their plight," said Prime Minister Micheal Martin. "This virus is taking away their ability to earn a living, to provide a key service in the heart of many communities.

"But we are doing what we are doing to save lives and to give our society and economy the best chance we can to open safely and sustainably," he said, while also trimming Ireland's "green list" of travel destinations to 10 countries from 15.

People arriving in Ireland from Malta, Cyprus, Gibraltar, San Marino and Monaco will now be forced to self-quarantine for two weeks.

Greece's top scientific adviser as warned against complacency after the country reported its highest single-day increase in infections in weeks.

Authorities reported 121 new coronavirus cases on Tuesday after a steady rise over the past 10 days. Tuesday's tally was the highest since April 22, bringing the total number of infections in the country to 4855 since the start of the outbreak in late February. There have been 209 deaths recorded in total.

Greece's early lockdown in mid-March buffered the country from the devastating effects of the pandemic seen in many other European countries, but the recent increase in infections has prompted authorities to introduce measures like mandatory face masks in closed spaces. 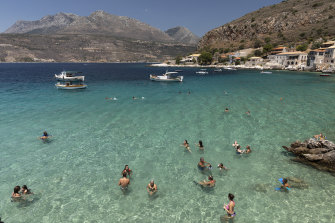 Professor Sotiris Tsiodras, who gave his first public briefing after a more than two-month hiatus, said there had been no pressure on the public health system, but cautioned that the situation could easily get out of control

There were outbreak clusters, he said, in a meat processing unit, and from two wedding parties.

There had been cases detected after Greece reopened its borders in June, but the recent surge is appeared to be domestic infections.

Over the past two months, he said, there was a 'clear shift' towards the virus affecting younger people. One reason may be that during the tourism season travellers, who are usually younger, are being tested, he said.

Bahamas locks down as hospitals struggle to cope

Bahamas Prime Minister Hubert Minnis has Monday a complete lockdown of the country for the two weeks, saying the bed capacity and human resources were being stretched amid a sharp rise in COVID-19 infections.

On Monday, the Bahamas, whose population is about 385,000, confirmed 31 new infections – 9 in the island of New Providence and 22 in Grand Bahama.

The new infections, Minnis said, gave a tally of 679 confirmed cases, the country's highest since it confirmed its first case in March.

Since the Bahamas fully reopened its borders on July 1 to international visitors, cases have increased exponentially as health officials traced the rise to gatherings and Bahamians travelling abroad to hotspots such as Florida.

Under the current travel policy, anyone arriving in the Bahamas must quarantine for 14 days at their own expense at a government facility and have a negative COVID-19 test before they leave.

Among new measures, funerals will be limited to graveside services with only five attendees, and businesses such as food stores, water depots, pharmacies and petrol stations will operate with restricted hours.

Fati scored 3 goals in 2 La Liga matches. He has 10 goals for Barca in 26 League games
Dest about Barcelona: It's an honor to play for the best team in the world
PSG are set to sign AUAR in the summer of 2021. Arsenal and Juventus are Interested in the player
Juve offered Fiorentina Rugani and De Sciglio as part of the payment for Chiesa. Violets want Demiral
Messi and Ronaldo have not seen each other for more than two years, and now they are heading to the Champions League. According to personal meetings, Leo takes out the opponent with a break
UEFA returns fans to the Champions League and Europa League, but empty stands will remain - in England, Spain, Italy and other countries local bans are in force
Zhivoglyadov about Champions League: Loko got the strongest teams of their leagues. Bayern writes a new story
Source https://www.smh.com.au/world/europe/young-people-are-fuelling-a-second-coronavirus-wave-says-who-20200805-p55il7.html?ref=rss&utm_medium=rss&utm_source=rss_feed