A young woman has managed to fight off a ski mask-wearing attacker who dragged her off the street and tried to choke her in a terrifying incident in Melbourne's east.

Police are on the hunt for the heavily built, pot-bellied man who followed the 25-year-old woman as she was walking north along Glenferrie Road in Hawthorn about 12.50am on Sunday.

Aware the man was tailing her, the woman crossed Glenferrie Road, walked onto Burwood Road and called a friend to tell them she was being followed. 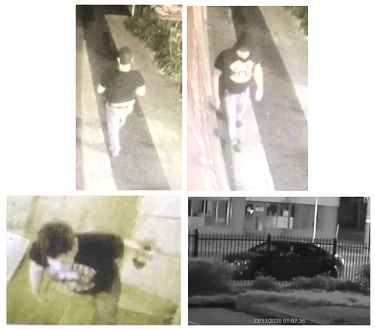 Police are searching for a man following an assault on a woman in Hawthorn earlier this week.Credit:Victoria Police

But the man continued to slowly follow the woman in his car, before driving past her and parking on Burwood Road.

Police said he got out of the car and walked north along Henry Street where he waited for the woman to pass him before grabbing her.

He tried to drag her down Henry Street.

"The woman struggled and elbowed the man to the stomach. He attempted to choke the woman before she was able to bite him on the arm," Leading Senior Constable Natalie Dean said.

The attacker let go of the woman and ran off along Henry Street.

The victim's screams were heard by two witnesses who followed the man into the nearby Central Gardens off Henry Street. They confronted the man before he threatened to assault them.

The man then ran back towards Williams Street before he was captured on CCTV returning to his car at 1.21am.

The attacker is believed to be about 183 centimetres tall with a heavy build and a pot belly.

He has short brown hair with a receding hairline and was wearing a black ski mask, jeans and a dark coloured T-shirt with an unknown motif on the front.

Detectives have released images taken from CCTV footage in the area and urged anyone who recognises the man or his vehicle, or remembers seeing him in the area on the night and may have dash cam footage, to come forward.

Anyone with any information is urged to contact Crime Stoppers on 1800 333 000 or submit a confidential report online at www.crimestoppersvic.com.au.

Atletico President: We always knew that Suarez is the best center forward in Europe
Mourinho on Bale: Playing time is not given, it must be earned
Until recently, Leo posed with Bartomeu and accepted millions, but then Barcelona broke down. Why?
West Ham have offered 33 million euros for En-Nasiriyah. Sevilla refused
Gattuso on 1:3 with Verona: You can't play like this if Napoli want to return to the Champions League
Sobolev on Tedesco in Spartak: Perhaps we will finish the season well, and he will want to stay
Liverpool are close to the transfer of England U16 striker Gordon for 1+ million pounds
Source https://www.theage.com.au/national/victoria/young-woman-stalked-dragged-off-street-by-ski-mask-wearing-attacker-in-hawthorn-20201126-p56i1p.html?ref=rss&utm_medium=rss&utm_source=rss_feed