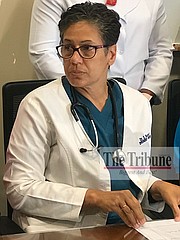 The scene just one street away from the hospital was "chaotic" and horrific, prompting PMH into lockdown mode to facilitate nearly three dozen victims.

Moments before the first call, the Ford F -150 truck mowed down Labour Day parade participants. The result - four deaths, all women and countless other injuries.

At 10.30 the first ambulance was sent to the scene, said Dr Burnett-Garraway, who was on duty during the incident.

"After they did the scene assessment they realised that there was more than five victims so they called back to have us send a doctor and a nurse in the second ambulance, which is protocol to assist with the triage and sorting of patients and the initial stabilisation," she told The Tribune.

"Just at the same time the telephone operator started calling as well, so EMS informed the emergency department as well as the telephone operator and she activated the mass causality incident plan which would include calling the hospital administrator, the principal nursing officer (and) the medical chief of staff.

"The initial response in the emergency department is by the most senior emergency medicine consultant on duty and what that person did, which was me, was start preparing the emergency room.

"First of all you put the emergency department and staff on stand by and those off duty just informing that we may need them to come in.

"We started clearing out the emergency room. So if we had admitted patients we tried to get them upstairs to the ward and we cleared out the resuscitation room, which is a four-bed area where the most critical will be evaluated. Then you assign the areas where you are going to treat the different categories of patients. We assigned a green area where the walking wounded would go and the main top floor area where the not-so-critical (will go).

"We informed security because we lock down the Emergency Department when we have a mass casualty incident and secure all the entrances and doors. We don't allow any family members or visitors in when we're preparing.

She said the blood bank, pharmacy and laboratory was also put on notice services might be needed.

A call was also placed to the operating theatre to stop elective surgeries in an effort to prepare rooms in the event victims needed emergency surgeries.

Officials further set up a command centre for administrative purposes to assist with registering patients and keeping a proper log of personal information.

"We informed our sister hospital, Doctor's Hospital because we have an agreement that if either of us is overwhelmed then we help each other.

"The Department of Public health responded to know if they needed to open a clinic (because) if the numbers are that large we don't want to bring those ones - triage green/walking wounded - into the hospital. You just bring the critical patients to hospital.

As the patients started to arrive, Dr Burnett-Garraway said health officials conducted a second triage of the victims while many surgeons descended on the accident and emergency area to offer assistance.

"So we moved all the family and friends to the food court. We set up a press room. We had clergy coming in, they want to help. We had ministers of government. We had to respectfully control the crowd because you can't have these persons in your work area. I turned around and said who are these people and why are they there?"

"So you put people out who can't help you and put people to work who can and that worked quite well."

Officials were at the same time careful not to ignore patient confidentiality rules.

The hospital was also burdened with other patients needing the attention of accident and emergency personnel.

"So I made an announcement in the waiting area that we have this mass casualty incident and a lot of critical patients were expected (and) the wait time was going to increase. If you felt you didn't need to be there you could go home. If you could wait until tomorrow or later to see physicians or speak with the triage nurse and let her know what you're experiencing, that was a way to clear out

"For the emergency department I only called in two additional consultants to help.

"We were fortunate because most of the patients were walking wounded (patients with minor injuries, strains, sprains, lacerations, extremity fractures, bruises or burns).

"They would be the last set of people to come into hospital and the last cared for. There were only three that had to be admitted and then one that coded and came in very unstable and she died. So there were only four red patients."

This activity continued in the emergency department until about 12pm when emergency teams said the scene was clear.

By this time, Dr Burnett-Garraway said most patients were receiving x-rays and cat scans where needed and operations were returning to the normal flow.

CAS did not establish the majority of Manchester City's alleged violations
Manchester City: the Club welcomes the decision of the CAS and thanks for the correct judicial process
Mourinho's classic plan for big matches worked perfectly. Arteta's crude Arsenal is a convenient target
Bartomeu on Xavi in Barca: There is a time for everything. We are not looking for a coach right now
Mourinho about the Europa League: Ask Hamilton if he wants to win Formula 2
Manchester City will play in the Champions League. CAS has accepted the appeal
Carragher on the Premier League: Liverpool can repeat success, but need transfers
Source http://www.tribune242.com/news/2018/jun/04/chaotic-scene-as-hospital-tackles-tragedy/

A man was denied bail last week after he is accused of engaging in sexual acts with his daughter dating back to 2018!

RBDF officer arrested for drugs on Independence Day… WELL WHAT IS THIS?

Man shot while on his motorcycle in the Charles Saunders area…

Moratorium for all new International Scholarships

47th Independence Celebration, A Display of Innovation and Creativity

From Independence to this 47 years later! A few weeks ago it was the DEFENCE FORCE GALS! Now looka dis? BP IS LIVE!!!

BUT president: Union yet to receive plan for schools reopening

A Caribbean Recipe That Dates Back To Slavery

STATESIDE: Trump has become the reality he railed against four years ago

FRONT PORCH: PM has our safety at heart - nothing more sinister than that

New E-Commerce Buyers Emerge In Mexico Amid The Pandemic

Lodge Joins BTVI in the Fight Against COVID-19

Two men who attempted to bribe police are fined

Sands: There is a low risk of catching COVID-19 at the beach

More than 6,000 students to enroll in UB this fall

PM says PLP is a ‘disaster’

Jesus promises us deliverance from our sins

It is not too late to change

SFA, UEFA Assist donate over $40,000 of equipment to Dorian-affected islands

TRUST ME: PM tries to persuade us he’s right

Laying out the roadmap for economic resilience

Bahamians are urged to 'acquire taste' for apps

'Devastating' if COVID-19 finds its way to Exuma

New cases a concern for some in Grand Bahama

Too drunk to remember stealing cash from bar

University of The Bahamas will have at least 6,000 students, says Lloyd

ALICIA WALLACE: When we are having a difficult conversation - are we really listening?

Bannister: No load shedding this summer