More than two years after Hurricane Dorian, Humane Society of Grand Bahama (HSGB) veterinarian Dr. De’Yanze Hanna and his assistants were finally able to return to a spacious, fully functional, $160,000 clinic to treat their furry patients.

The vet and his team of four nurses had been working out of a mobile medical unit since storm surges devastated the three-acre HSGB compound south of Grand Bahama International Airport.

“It has been a challenge,” Hanna said.

“I feel like the pace hasn’t slowed down yet after the storm and now after the pandemic, but we are happy to be back in a building.”

Dorian not only wiped out the entire facility – offices, the clinic with all its equipment, dog kennels and shelter – but also claimed the lives of half the dog population and many cats.

Hanna is grateful that the team was able to move out of the cramped space of the mobile van and into the newly converted building.

“In the van, the space was so small, we could barely turn around,” Hanna said.

The new clinic, one of five buildings on the property, was an unused kennel area prior to Dorian. 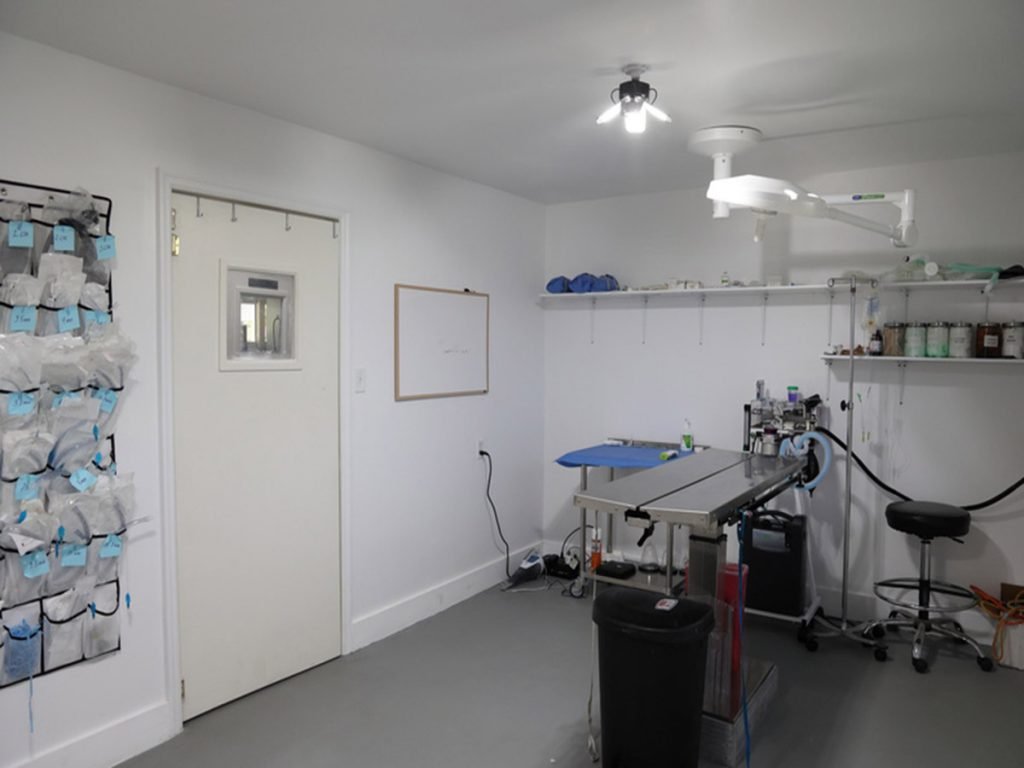 The Humane Society of Grand Bahama. (Photo by Matthew Aylen)

Now, it features two examination rooms, a surgery room, an isolation room, recovery and radiology rooms, as well as waiting areas, a doctor’s office, and space for additional work areas.

Boasting of the surgery room, Hanna said, “It is really spacious.”

When funds are available, another surgical table can be added to the room, according to the vet.

In the meantime, Hanna said, now that the mobile vehicle is freed up, it would be great to take into hard-to-reach areas of East and West Grand Bahama for spay and neutering operations.

Prior to Hurricane Dorian, and with COVID-19 lockdowns, HSGB had already been extremely busy caring for animals with owners and strays.

“That’s what it takes just to do the minimum,” Burrows said.

The facility employs 20 staff members, including the vet and nurses.

“We take in over 1,200 stray animals a year,” she said. “Eighty-five percent of that number are dogs.”

According to Burrows, the work has been overwhelming, especially since the island’s economic struggles, which worsened due to Hurricane Dorian.

The only piece of equipment that was saved was a surgery light because it was hanging from the ceiling.

Despite the extensive damage to the interior, the buildings remained structurally sound.

“It was a daunting time, and it was a long road to recovery,” Burrows said.

“Obviously, like everyone else, it was compounded by the pandemic coming along six months later and that just slowed everything way down.”

There was a plan already drawn for a new clinic on the premises but, after Dorian, HSGB officials had to rethink their idea. As a result, the original plan was adjusted to include the conversion of the unused kennels to the new clinic.

“We started renovations for the clinic in 2021,” Burrows said.

“There were delays because of shipping and things like that. Therefore, what should have taken no more than two or three months ended up taking about five to six months.

“And then, we had delays with equipment that we had ordered with the pandemic and all the shipping delays around the world. So, it was not until right around Christmas that we were able to get Dr. Hanna and his team out of the bus and into the clinic.”

Burrows estimated it cost just under $700,000 to get HSGB back up and running.

“We figured the replacement cost for all the equipment lost was $350,000, not counting vehicles,” she said.

In the upcoming budget year, HSGB will receive a stipend from the government to assist with its day-to-day operations. While it is only seven percent of the facility’s annual budget, Burrows said she is happy for the help.

“We are hopeful that going forward more efforts and resources will be extended.”