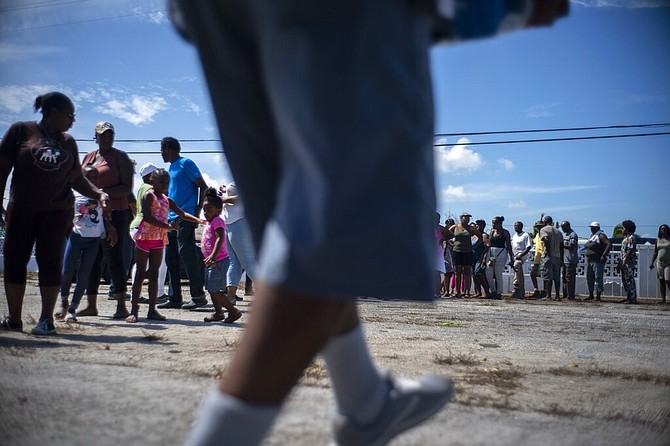 University of the Bahamas northern campus in Grand Bahama

10.25am UPDATE: From the Associated Press – Emergency officials say they have had to "clamp down" on aircraft demanding payment for evacuating displaced people from areas devastated by Hurricane Dorian.

The National Emergency Management Agency says aviation authorities are aware of reports of "commercial activity" and will revoke flight permission for any aircraft charging fees.

The agency said in a statement Sunday that no flights are permitted to bill for evacuations and that consumer protection officials are investigating "incidences of price gouging."

Civil aviation authorities also say they are restricting air space over the devastated Abaco and Grand Bahama islands to prevent accidents and ensure only approved aircraft that are providing aid can fly there.

Officials have already authorised 200 private planes in the area and say "saturated airspace was creating a volatile situation."

• About 250 people who lost their homes when Hurricane Dorian hit the northern Bahamas have arrived in Nassau after a 13-hour trip on a government-chartered ferry.

Passengers on the "Sea Wind" ferry arrived in Nassau on Saturday, joining hundreds of other people from Abaco and Grand Bahama islands who were desperate to escape harsh conditions there.

Carlen Merizier, 23, says she and her two-year-old son are lucky to be alive. She says "a lot of people died" and that she started praying when her home collapsed in the hurricane.

Jota has 8 goals in his last 8 games for Liverpool
Powerful cyber attack on Manchester United: hackers blackmail, and the state threatens a fine (up to 18 million) for leaking data about fans
We want to get to know you better - please complete this questionnaire and tell us what other sports media you read!
Pavel Zanozin: At Utkin and Maslachenko was a bit of a strained relationship. Vasya became the editor-in-chief of NTV-Plus, there was jealousy
Messi, de Jong and Busquets - in Barcelona's bid for the match against Osasuna
Klopp on Wijnaldum: I want him to stay. But nothing has been decided yet, everything is possible
I didn't see the greatness of Maradona at all. But I can't stop thinking about it
Source http://www.tribune242.com/news/2019/sep/08/hurricane-dorian-updates-clamp-down-aircraft-deman/

New arrivals to Lyford Cay gated community tested positive for COVID19 and a big party was held Monday evening by one who is now in quarantine for COVID-19!

DIANE PHILLIPS: Who is Potcake?

A COMIC'S VIEW: Reasons to be thankful

EDITORIAL: Having powers doesn’t mean you have to use them

In year of lockdowns and curfews, crime down

Man on bail for the murder is charged for murder again – this time the murder of Renaldo “Bones” Nixon this week in the Grove!

The FNM has broken our Bahamas, weakened national institutions, destabilised our society

DRA and Stars Bahamas partner with tablets distribution to students

Love lights a tree event to be held tonight

Dames - my respect for Turnquest resignation

‘We are flattening the curve’

25 percent of public school students in danger of repeating

Children’s homes press on despite pandemic

Abuse of the Emergency Powers Act

Turnquest thanked for his service

IAN FERGUSON: Motivating workers to the benefit of all

STATESIDE: We’ll still be picking over the bones of this election the next time we go to the polls

FRONT PORCH: Magical thinking won’t see us through this crisis, following a clear strategy will

Bahamas to get $60m for COVID battle boost

Upstairs on the Bay Thanksgiving Dinner

Turnquest tell of his reputation of “transparency and accountability” but we have yet to know what happened with the $5.1 BILLION borrowed in that last three and a half years!

One Term PM Minnis has accepted the resignation of his Finance Minister and Deputy Prime Minister Kevin Peter Turnquest!

International Day for the Elimination of Violence against Women 2020

A case for resignation

Governor-General of The Bahamas: Proclamation Regulations

‘We will see what happens’

D’Aguilar: It’s much better here than there

Woman without work turns to volunteering

‘I’m focusing on work, that’s all’

Emergency rule renewed - PLP says ‘we won’t back it’

Male and family shot up in The Grove moments ago – male aka “bones” died on the scene! He becomes the country’s 66th homicide victim…