Keyshawn Strachan secures bronze in javelin at U20 Worlds 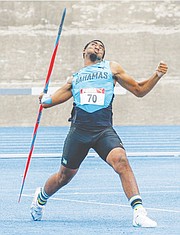 THE Bahamas finished the 2022 World Athletics U20 Championships in a five-way tie for 18th place as the event concluded last weekend at the Pascual Guerrero Olympic Stadium in Cali, Colombia.

Keyshawn Strachan concluded the competition with a bronze medal in the men’s javelin in addition to the gold medal from Antoine Andrews in the 100m hurdles earlier in the meet.

Other nations tied with The Bahamas with one gold and one bronze medal were Ukraine, Serbia, Italy and Estonia.

At the last U20 Championships in Nairobi, Kenya, Strachan finished seventh with his throw of 70.30m on his second attempt. His 2022 season of milestones saw him improve to the second leading mark in the world this year with his national record setting throw of 79.89m in regional competition at the CARIFTA Games and now a global bronze medal.

Feltner, the silver medallist in Nairobi, also improved on his performance with his gold in 2022.

Andrews also made Bahamian track and field history with his gold medal record setting performance in the 110m hurdles on August 3.

He ran a time of 13.23 seconds, lowering his own national record and setting a new U20 world leading time.

Andrews highlighted day one for team Bahamas with his then record setting time of 13.36 in heat three of the opening round. His time surpassed the mark of 13.38 set by Shamar Sands in 2009 and the junior national record of 13.67 set by Sands in 2002.

Andrews also improved on his performance in Kenya when he ran 14.08 to finish no.23 overall in the field.

“I think we all agree that the World Athletics U20 Championships Cali 2022 has been a spectacular event and we celebrate that it is one of the best versions in the history of the event with magnificent moments in the achievement of medals and resounding results in new records.”

Survey: Some Bahamians eating less or skipping meals due to high inflation