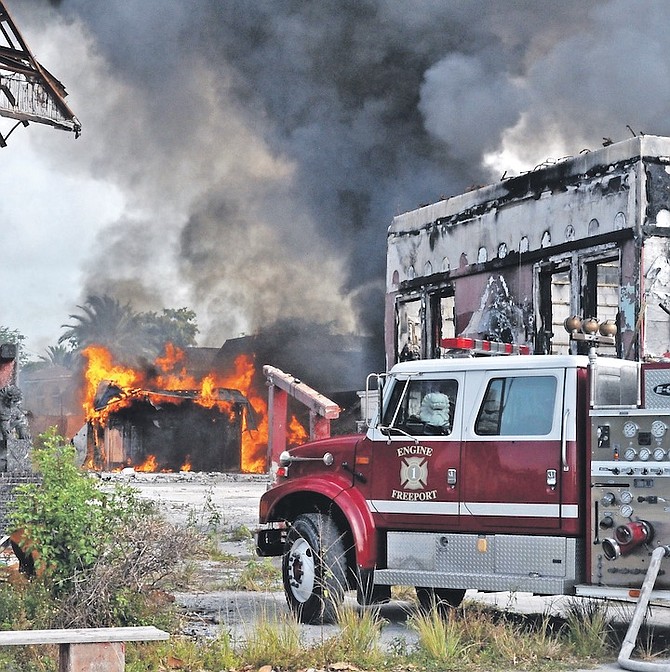 THE BLAZE at the International Bazaar this week. Photo: Vandyke Hepburn 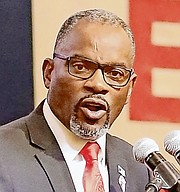 CENTRAL Grand Bahama MP Iram Lewis believes fires at the International Bazaar in Freeport have been “deliberately” set and that arson is “certainly in play”.

However, Chief Superintendent Walter Henderson, press liaison for Grand Bahama and the Northern Bahamas, told The Tribune yesterday police could not confirm this and urged people not to jump to conclusions.

“The investigation is still trying to ascertain that information,” Mr Henderson said.

“We just try to caution people not to jump to conclusions. We have to find evidence to support an assertion. Once that is found, then we’ll make an official statement concerning that.”

Mr Lewis’ press statement was released after another fire struck the mostly shuttered Bazaar on Tuesday. Structures at the site were struck by fires last November and December.

The former minister said the Free National Movement is concerned with the frequency of fires at the Bazaar.

“Apparently these are not random fires. As it appears, these fires are being set deliberately, arson is certainly in play,” according to his statement.

“Our concern is not for the structure or whatever will remain to the owners at this time. Our concern is that no one is trapped in these buildings and also that there are no toxic fumes emanating from these fires that can harm the public and those residing in the area. We would like the powers that be to be more vigilant, and more observant in terms of patrolling the area and ensuring that the arsonist, if that is the case, to be brought to justice.

“Perhaps it is time now for the owners of this structure to go ahead and completely demolish it and level the site. As it is right now, it is no use to the community. It is an eyesore; a health hazard and it is a place where homeless people reside in some instances. The fact that these fires are happening so frequently even those who may be using it as shelter may now be in danger of losing their lives.

“It is high time for the owners of this structure to now level it and to make room for future developments and to ensure that no life is compromised as a result of persons going into these buildings to find shelter and perish in a fire or perish as a result of the building collapsing due to the fire weakening the structure.”