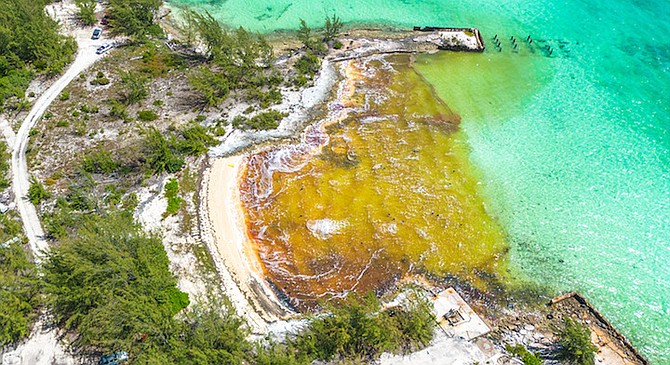 An aerial view of the oil spill in Exuma. Photo: Reno Curling

ATTORNEY General Ryan Pinder said his ministry has received all of the necessary reports from agencies involved in conducting investigations into the Exuma oil spill and is now preparing paperwork “to bring action”.

Mr Pinder was asked for an update into investigations on the oil leakage ahead of yesterday’s Cabinet meeting.

He said: “The Office of the Attorney General has collected all of the applicable reports from the agencies including the police, the Port Department and from DEPP (Department of Environmental Planning and Protection) and have gone through this in respect to potential liability.

“We’ve also done an analysis both on domestic law as well as liability that would be connected to international conventions that we’re members of with respect to oil spills and have done an internal analysis on liability and we are now preparing the documentation to bring action.”

Some 36,000 gallons of diesel were spilled into waters off a bay at Exuma in late July as a vessel, contracted by Sun Oil, was offloading fuel to Bahamas Power and Light at George Town.

The leakage was said to have happened as a result of a “breach in the hose” that ran from the supply ship.

Following the incident, government officials pledged that those responsible for the spill would “pay” after investigations had been completed.

When asked whether the government had any plans to tighten legislation geared towards preventing similar mishaps in the future, Mr Pinder said that officials were pleased with what was in place now.

“Well, I think the legislation is in place,” he told reporters. “You would’ve known shortly after coming to office that we updated the Merchant Shipping Act to bring it in compliance with international best practices.

“We are completing the regulations under that legislation now so that we can bring it into force and once that’s brought into force, certainly that will provide an enhanced amount of level of oversight under the Merchant Shipping Act which is the governing piece of legislation in this regard with respect to merchant shipping and the safety mechanisms needed.

“Our environmental laws are pretty stringent, so I think we’re pretty good there and needless to say, we feel pretty comfortable about the existence of liability and damages.”

Man bound to keep the peace for a year by court

Man charged with possession of unlicensed firearm and ammunition

DIANE PHILLIPS: The little team that could – and did

Equipment to begin construction for new roads and airports on Cat Island has arrived!

No change in electric disconnections yet after bills increase