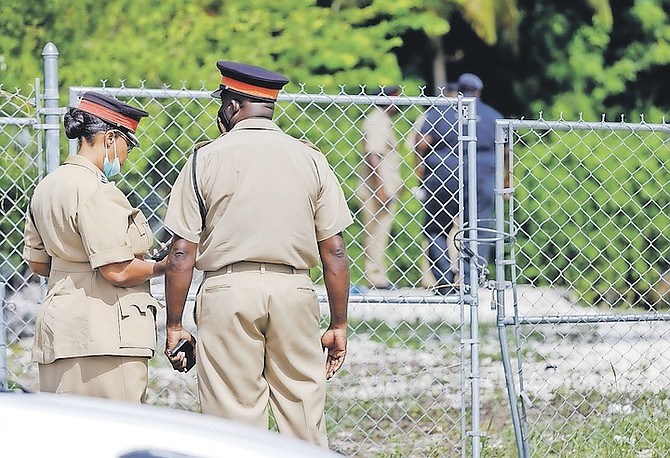 POLICE at the scene after a child drowned at the Seabreeze canal yesterday. Photo: Austin Fernander

A TEENAGE boy drowned while swimming with friends in the Seabreeze Canal yesterday.

The tragedy prompted a call from police for parents to: “know where your kids are at all times, not sometimes”.

Last Tuesday, 11-year-old Gerodo Atwill Taylor Jr, was found dead and suspected to have drowned in a pond near the golf academy opposite the national sports stadium .

On the same day the body of a juvenile male was pulled from waters near Paradise Cove, Deadman’s Reef, Grand Bahama. He had gone swimming at Celebrity Beach near Paradise Cove with four boys and did not return to shore when the others did.

A woman also drowned last Tuesday after she tried to assist a child who was in distress in the waters of the Staniard Creek area.

At the scene yesterday, police said after receiving an emergency call, officers from the Marine Support Unit arrived to find a young boy submerged in the water of the Seabreeze Canal, having drowned.

His body was removed from the water and he was pronounced dead on the scene.

Chrislyn Skippings, police Public and Internal Affairs Officer, said the boy appeared to be between 13 to 14-years-old. She suggested he was swimming unsupervised, when he drowned.

He is said to be a resident of the Pinewood Gardens community.

Neither the deceased nor his parents have been identified.

Officer Skippings urged parents and guardians to be watchful of their children and be with them at all times.

“Take them to the beach, don’t send them to the beach,” she said at the scene. “Send them with someone you know, who is responsible so that in the event that something happens, we don’t end up losing one of our darlings. You need to know where your kids are at all times, not some times, all times. You can’t allow your children to be roaming about and you don’t know where they are.”

Mrs Skippings added that any parent or guardian who does not heed the law, by being responsible parents to underage children, will be prosecuted fully.

She added the parents of the deceased young boy may be prosecuted should the police find reason within the law to do so.

“If we find that there are areas within the law that we can possibly bring charges, then we definitely will,” she said.