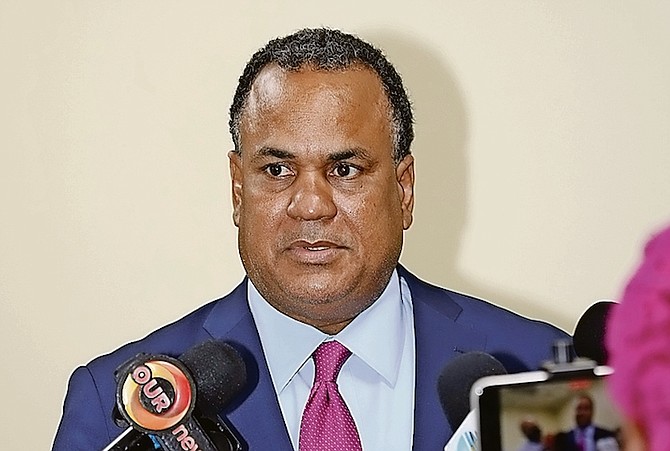 A CABINET minister says the government doesn’t want to stifle “revenge tourism,” as it is leading the economic rebound from the COVID-19 economic shutdown.

Senator Michael Halkitis, Minister for Economic Affairs, speaking at the Bahamas Chamber of Commerce and Employers Confederation’s “Power Breakfast” yesterday said this “revenge tourism” is driven by people who were locked down during the pandemic and now want to travel the world as lockdowns have been lifted in our major source markets around the world.

Mr Halkitis said: “A lot of it has to do with Cabin Fever, pent up demand and people now finally being able to move about and so, as we crafted the budget, it was important for us not to do anything that would interrupt this growth or to stifle this emerging growth.”

For the first five months of the year tourism arrivals were estimated at 2.43m visitors, meaning that it is on pace to record near 6m tourists for 2022. The record year for tourism was 2019 with 7.249 million arrivals.

Promoting the government’s intention not to introduce any new taxes for the current budget year and also tax reductions on various areas, Mr Halkitis said: “So, the economy is beginning to rebound because the pandemic is receding, we can open up...  the world is opening up.”

But more is needed, he said, because the COVID-19 only “ripped” the covers off of the issues that have plagued a flagging Bahamian economy for the past 30 years. Now is time to “break the cycle” and start on a new pathway forward for growth.

He said you begin to break this cycle by focusing on “four elements: economic growth improved revenue administration, cost containment and identifying new sources of revenue,” with economic growth being the primary goal for the current government.

He added: “In terms of economic growth, of course, it is being led by tourism, and we have strong growth expected in our economy in 2022 and the forecast is that this growth will moderate as we go into 2023/2024. We are actively working to disprove those predictions of a moderation and to keep the economy growing at a strong clip.”

In order to have the economy growing at a strong clip the government must reform the way it has done business and remove some of the bottlenecks and inefficient bureaucratic red-tape that stifles investment to which Mr Halkitis noted that the government has reformed the way the National Economic Council operates and it now has “weekly scheduled meetings” to ensure that foreign direct investment projects are dealt with in a timely manner.

The government also wants to continue the support for local entrepreneurs to develop other sectors of the economy, but understands that tourism is our main economic driver and will be for the foreseeable future. He added: “Now there are opportunities to diversify and even diversify within the industry, but for the foreseeable future that will be our main driver. It’s not to say we do not pursue diversification because we do. But it’s unrealistic to think that we can displace tourism as our main driver anytime soon and tourism is bouncing back around the world and The Bahamas is among the leaders in this recovery.”

Global international arrivals for The Bahamas were at 61 percent below 2019 levels in Q1 of this year, with arrivals in the Americas at -46 and in the Caribbean -26. So, the Bahamas is trending higher than its counterparts in the region.

Jones plays against the Celtics

Quartet of young Bahamians to sail in Brazil

Wilson not convinced of dramatic increase in construction material

There will not be a dramatic rise in inflation, Wilson says

Concerns over cholera cases in Haiti

Climate financing among priorities for Caribbean leaders ahead of COP27

Call it what it is; rape is rape

The problem of blindsight and Small Island Developing States

Thelma Gibson workers ‘have had enough’

THE KDK REPORT: Deep breaths in the dark

Death count following Ian rise to 80 in Florida – Pray for them..

Minister criticised over possibility of bringing theatre festival to Bahamas

‘Deal fairly’ with all public officers

In pursuit of a lifelong dream

An end to the COVID-19 mask mandate

Oblivious to the obvious in The Bahamas

A message to young men

Delon Kemp is a rising star scholar at LCIS

Driving made cheap strikes once again on Bay Street!