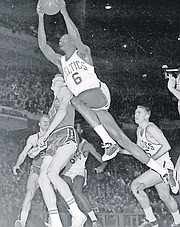 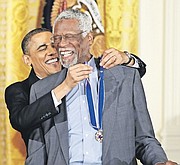 BILL Russell died on the last day of July. He was 88 years old. He was also in many minds the greatest basketball player of all time.

The greatest of all time? Yes. Bill Russell was the greatest player ever. He racked up the most championships and was at times as great a coach as he was a player. He also was a social justice trailblazer.

If you’re more than a casual hoops fan, you can readily add a dozen names to the list above, and the chances are that most or all of them will be black players. In the world of pro sports in the United States, the NBA is the pacesetter in social consciousness, by far, despite some superstars like Jordan who only rarely entered the arena of social and racial justice. And particularly since the on-court brilliance of such talents as Johnson, Jordan and James captured the attention of the entire world and turned basketball into an international powerhouse sport. Exceeded only by soccer, black players have led the way to stupendous wealth, individual power and even franchise ownership.

We regularly see such contemporary talents as the Warriors’ coach Steve Kerr and peerless sharpshooter Stef Curry, and the Spurs’ highly successful coach Gregg Popovich offering their views on matters ranging from abortion rights to the murder of African- Americans by the police. And James himself, the greatest player of his generation, regularly takes on controversial issues, often with sensible perspectives, and has regularly defied politicians such as Donald Trump.

Such outspoken activism is practically unheard of in the other American professional sports. Hockey is dominated by white expatriates, many of them from Canada and Russia. Baseball is increasingly played and managed by Latins, many of them also from abroad. And because of the brutality of the game and resultingly short careers of most of its players, the NFL largely consists of politically cautious – or, like Tom Brady, quietly conservative – players and coaches.

It’s widely believed that most pro sports owners are Republican sympathisers and often significant donors, but this is largely kept discreet.

The NBA players are very much outliers in this environment. It is not at all uncommon for them to comment openly on social and other issues of the day. And their outspokenness has become acceptable to the degree that it has virtually no effect on the sport’s growing popularity.

One of the big things about Bill Russell is that he played a huge role in making all of this possible.

Here’s Michael Jordan himself, certainly in many minds a rival for the title of greatest of all time: “Bill Russell was a pioneer - as a player, as a champion, as the NBA’s first Black head coach and as an activist,” Jordan, now the chairman of the NBA’s Charlotte Hornets, said in a statement. “He paved the way and set an example for every black player who came into the league after him, including me. The world has lost a legend. My condolences to his family and may he rest in peace.”

Over a 15-year period, beginning with his junior year at the University of San Francisco, Russell had what has often been described as “the most remarkable career of any player in the history of team sports”. At San Francisco, he was a two-time All-American, won two straight NCAA championships and led the team to 55 consecutive wins. He also won a gold medal at the 1956 Olympics.

During his 13 years in Boston, Russell led the Celtics to the NBA Finals 12 times, winning the championship 11 times, the last two titles won while as both a player and serving as the NBA’s first black head coach. In Boston, he faced and overcame rabid racial hatred from some fans. Stoically, he persevered.

Russell became the first black player to be inducted into the Basketball Hall of Fame in 1975, and in 1980 he was voted Greatest Player in the History of the NBA by the Professional Basketball Writers Association of America. He was part of the 75th Anniversary Team announced by the NBA last October.

During much of Russell’s illustrious playing career, his great rival and foil was the massive, prodigiously talented Wilt Chamberlain, another indomitable centre and scorer without equal.

In the eight post-season series between the two players, Russell and the Celtics won seven. Russell has 11 championship rings; Chamberlain has just two.

“I was the villain because I was so much bigger and stronger than anyone else out there,” Chamberlain told the Boston Herald in 1995. “People tend not to root for Goliath, and Bill back then was a jovial guy and he really had a great laugh. Plus, he played on the greatest team ever.

“My team was losing and his was winning, so it would be natural that I would be jealous. Not true. I’m more than happy with the way things turned out. He was overall by far the best, and that only helped bring out the best in me.”

Perhaps the best example of Bill Russell as a social activist and fighter for racial and societal justice came early in June, 1967. At the time, the greatest prizefighter in the world was Muhammad Ali of Louisville, Kentucky. Ali, fighting as Cassius Clay, had shocked the world in February 1967 by beating then world champion Sonny Liston so badly through six rounds of a title fight in Miami Beach that Liston could not come out for the seventh round. Liston, an 8-1 betting favourite before the fight, was Mike Tyson long before the world ever heard of Tyson.

British boxing promoter Harold Conrad said, “People talked about [Mike] Tyson before he got beat, but Liston was more ferocious, more indestructible... When Sonny gave you the evil eye — I don’t care who you were — you shrunk to two feet tall.” Before his loss in Miami, Liston was so dominant that boxing writers fretted that he would eliminate competition and ruin the sport.

Three years after his Miami triumph, however, the hero Ali had become a pariah in American society because he refused to join the US army after he was drafted; his boxing license had been revoked, and he faced up to five years in prison. Ali declared that he could not join the military service due to his religious beliefs. The Vietnam War was raging, and its unpopularity was leading many young American men to try desperately to avoid the military draft. There was initial suspicion of Ali’s motives, including by many of his athletic peers.

Several of the greatest athletes in American history gathered in Cleveland in June 1967 to talk with Ali about his situation. Among his most dogged inquisitors was Bill Russell. Others in attendance included the Cleveland Browns’ Jim Brown, viewed by many as the greatest player in NFL history; the great Bucks and Lakers center Kareen Abdul-Jabbar, and other lesser stars. One of these was Sidney Williams, then an NFL special teams’ player and friend of Brown who became the US ambassador to The Bahamas 27 years later.

Ali persuaded them all of the sincerity of his beliefs, and they decided to stand with him in support of his defiance of his draft orders from participants to stand with Ali in support of him and his position was thus an act of courage that put their reputations and their careers at risk. Russell was leading the way throughout the meeting.

The Cleveland Summit has been called “a significant turning point for the role of the athlete in society” and “one of the most important civil rights acts in sports history.”

Bill Russell was there in Cleveland. And for over fifty years afterward, long after he had retired from basketball, Bill Russell was relevant. His presence made both protests and discourse relevant.

Russell’s laugh, hearty and infectious, lightened many moments both festive and harrowing. Basketball, and America, has suffered a great loss.