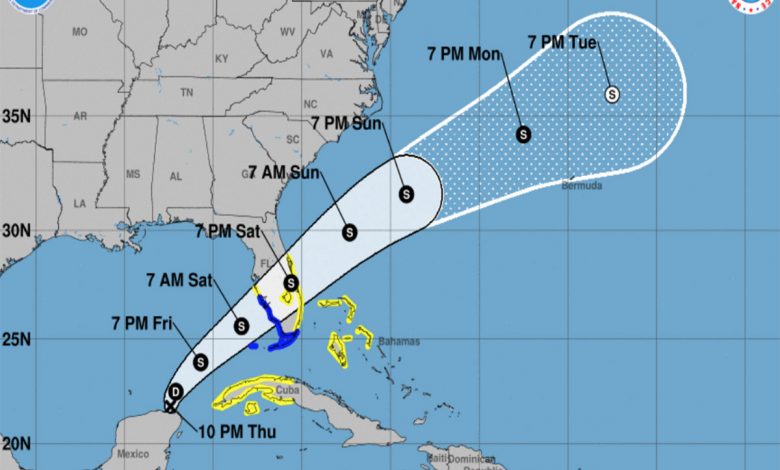 A tropical storm warning was issued for the northwest Bahamas this morning, according to an alert from the Bahamas Department of Meteorology.

“Residents in Bimini, North Andros, The Berry Islands, Grand Bahama and Abaco should brace for tropical storm conditions on Saturday,” the alert warned.

“…Potential tropical cyclone one is moving toward the northeast near six mph.

“This general direction with an increase in forward speed, which is expected to begin later today, will continue through Sunday. On the forecast track, the system is forecast to move across the southeastern Gulf of Mexico through tonight, across the southern and central portions of the Florida Peninsula on Saturday and then over the southwestern Atlantic north of Grand Bahama and Abaco on Saturday afternoon and Sunday.

“Maximum sustained winds have increased to near 40 mph with higher gusts. The system is expected to develop a well-defined center and become a tropical storm later today. Some slight strengthening is possible while it approaches Florida today and tonight. Additional strengthening is also possible after the system moves east of Florida and north of Grand Bahama and Abaco on Saturday afternoon and Sunday.

“The potential tropical cyclone is expected to produce heavy rain over the northwest Bahamas of four to eight inches, with maximum totals of 12 inches. This rain will produce considerable flooding.”