Bhutanese evacuated from Jaigaon get their possessions back 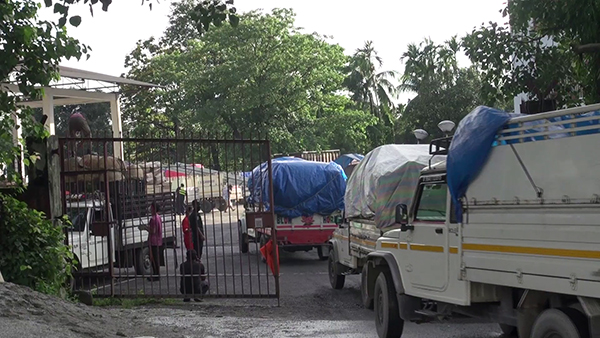 After three months of waiting, Bhutanese who were evacuated from Jaigaon, India prior to the border closure have started to bring back their possessions left behind earlier.

In the wake of COVID 19 pandemic and the border closure that ensued, more than 5,000 Bhutanese living in Jaigaon were evacuated and rehabilitated in Phuentshogling.

Since Saturday, those who resided in Jaigaon earlier started bringing in their belongings with the help from Phuentshogling Thromde. Indian vehicles transport the belongings till the customs port in Phuentshogling from where they are conveyed on Bhutanese vehicles and taken to their respective homes.

As much as people are relieved to get their possessions, they have also been burdened by the expenditure incurred in transportation and labor charges. Almost all the people who lived in Jaigaon are from low-income groups.

Manoj Rai, who brought his possessions from his residence in Jaigaon, had to shell out around Nu 19,000 in total. “I paid four months’ rent, which is Nu 14,000. I had to pay around Nu 3000 for labor charges in Jaigaon and then another Nu 2000 for transportation and unloading charges here,” he said.

Roshan Chhetri, who now lives Phuentshogling, said that they talked with their house owners in Jaigaon, requesting them to pack and send their possessions. “After paying our rents, they loaded our belongings and sent here. We already paid labor and transportation charges which are quite high.”

But he added that people are happy to get their possessions back. “We don’t know yet if some of our belongings have been damaged or not. We simply trusted the house owners there and they did as we asked.”

All vehicles bringing back the belonging were disinfected and safety protocols were followed like all other imports.

Ronaldo posted a photo of the celebration after Torino's goal: I love this feeling😉 💪 🏼
Flick about Lewandowski and the Golden ball: Why not? He laid the foundations
Jurgen Klopp: my two main Champions League favourites are Bayern and Manchester City
Cheryshev made an assist in La Liga for the first time since September
Muller of the victory in the German Cup: a Bit of a sad moment. There were no fans in this final
Lampard on 3-0 with Watford: a dry Win at home, three goals scored-Chelsea played very well
Pulisic on 3-0 with Watford: Chelsea needed this win. We are confident that we can get into the top 4
Source http://www.bbs.bt/news/?p=133630

Another impact of the Covid-19 pandemic on hoteliers

Parops make the most of Kidu Mobile Medical Unit

No foreign players this season in the Bhutan Premier League

Bhutan Institute of Well-being, the only Rehab Centre for both male and female, to open from tomorrow

Year-on-year inflation increases by 4.55 % as of April this year

Towards a Smarter, Greener and More Resilient Recovery through Innovation in Bhutan

Over 500 PI and PII workers want to go home

Govt. to set up S/Jongkhar and Gelephu as tourist entry points

A solution for the joblessness

People across the country express gratitude to His Majesty The King

Maokhola bridge on halt due to Covid-19

Maokhola bridge on hold due to Covid-19

Men sentenced for “breach of public order and tranquillity”

Rotavirus vaccination is not cost-effective for Bhutan

Thanking His Majesty for the Kidu

Artificial intelligence and adaptive governance in the corporate sector of Bhutan: the new normal

US Department of State recognises Lt. Col Karma Rigzin for her leadership role to combat trafficking

Risk management at the dry port and customs port in Phuentshogling

People relieved after the announcement of relief measures phase II

Hoteliers express gratitude to His Majesty

FCB to move stock to colder regions to prevent loss

CIT and BIT payment deferred for tourism sectors until December

Favouritism in public service delivery, the most prevalent form of corruption

Should the private ECCD centres reopen? Govt. to come up with a final decision soon

TCB to reinforce Bhutan as a high-end destination

Learning from our mistakes