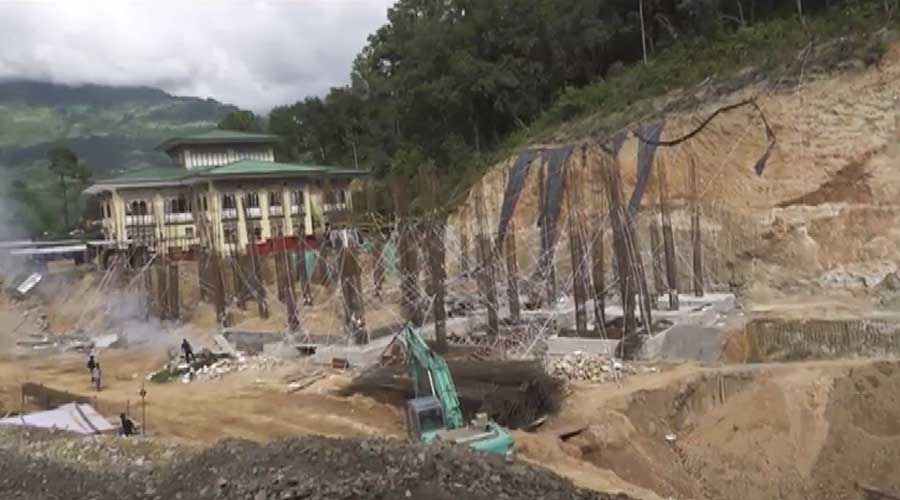 The construction of the 65-bedded Gyaltsuen Jetsun Pema Mother and Child Hospital in Monggar is finally gaining momentum. The work began towards the end of last year, which was delayed by about five months due to the pandemic. The mother and child hospital is expected to be ready by July 2025.

The groundbreaking ceremony for the construction of the mother and child hospital was held in June last year.

The construction was planned to start two months later in August. However, due to the COVID restrictions, the plan remained in the paper. But now works are gaining pace at the hospital site, which is located a few kilometres from Monggar town.

In a virtual interview, the Health Minister updated that the construction of the hospital is going smoothly.

“When the foreign workers have to undergo seven-day mandatory quarantine, the cost escalates for the contractors. That’s not fair. We have recently started the construction and when I went there, clearing of bushes and site development works were underway. The Engineering team should be already there. So work is going as planned,” added Health Minister Dechen Wangmo.

Once the hospital structure is complete, it will offer subspecialty services in paediatrics and gynaecology, covering six eastern districts.

Currently, Monggar Regional Referral Hospital delivers about a thousand babies in a year, the highest among the six hospitals in the east.

So, the upcoming mother and child hospital will handle the child delivery cases with improved facilities and services.

Women in Monggar are also happy as a separate hospital for mothers and children is coming up.

“If the specialists are deployed here in Monggar, we don’t have to go to Thimphu and it will ease the financial burden and also save time for us,” said one of the mothers, Damcho Dema, who resides in Monggar town.

Some other women also said maternal and child healthcare services in the district will be miles better than the existing ones.

“Since there is only one Pediatrician, he comes at around 12 or 1 pm. So, with children, it is challenging for me to wait for him. If a child is referred to Thimphu, it is far away from here and moreover, the road is not good during summer. Therefore, it will be good to have a separate mother and child hospital in Monggar,” said another mother, Tendrel Zangmo.

The mother and child hospital will also be the first-ever energy-efficient hospital in the country.

It is being constructed at a cost of more than Nu 935 M.

Spoken language proficiency test for the post of Reporter

Climate change is a major threat for Bhutan: Kanni Wignaraja

Govt. will not consider further contract extension or cost escalation