MHPA Unit 3 turbine down due to an electrical fault 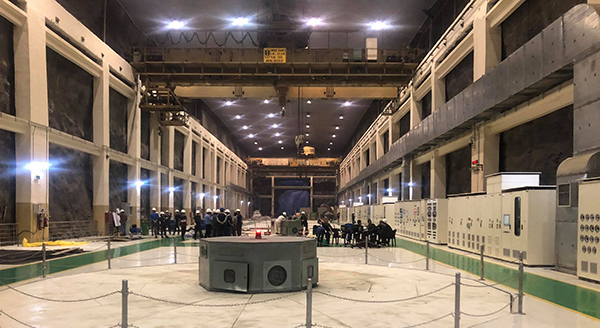 The turbine 3 of the 720 MW Mangdechhu Hydro Power plant (MHPA) in Trongsa has been un-operational for almost three weeks. A turbine is an electricity-generating machine of a hydropower plant.

On May 31, a fault was detected in the rotor of the turbine while mandatory checking was carried out in all the electrical components of the machine.

Chief Electro-Mechanical of MHPA, Kaushik Maulik, said that a generating machine has lots of components that have to work independently and flawlessly. “This fault is a rare fault. It does not occur on regular basis. But unfortunately our Unit 3 developed the fault and we are restoring it.”

The projects officials said that they have identified the sudden electrical fault developed in the turbine and the machine will be operational by this weekend.

The Managing Director of MHPA, A.K.Mishra said that this however has not affected energy generation. “There is no loss in the energy generation because the water is currently available only for three machines.”

Meanwhile, even with unit 3 down, the three others turbines generated 600 MW as of yesterday. MHPA has four turbines, each with a generating capacity of 180 MW.

Josep Bartomeu: Setien is doing a great job. We have full confidence in him
Pique on La Liga: Barca do not like to fall behind, but we have made every effort to change the situation
Pep Pro 0:1 with Southampton: city liked the Game, but it's not enough to win
Mandzukic is Interesting to Fenerbahce and Galatasaray. It is also claimed by Loco and Milan
Messi wants to finish his career at Barca. Bartomeu believes that Leo will not leave in a year
Gasperini about Atalanta: we Want to reach the Champions League and break the club's record for points in Serie A
Hames can leave Real Madrid for the Premier League for 25 million euros. A year ago, Atletico and Napoli offered 45-50 million euros for him. Real Madrid Midfielder Hames Rodriguez is likely to change clubs at the end of the season
Source http://www.bbs.bt/news/?p=133601

Keeping an eye on CCTVs

UNDP and GNHC sign project on Covid-19 response and recovery

When the abusers and abused stay home

Space issue at Dorling Goenpa, Wangdue to be solved soon

Another impact of the Covid-19 pandemic on hoteliers

Parops make the most of Kidu Mobile Medical Unit

No foreign players this season in the Bhutan Premier League

Bhutan Institute of Well-being, the only Rehab Centre for both male and female, to open from tomorrow

Year-on-year inflation increases by 4.55 % as of April this year

Towards a Smarter, Greener and More Resilient Recovery through Innovation in Bhutan

Over 500 PI and PII workers want to go home

Govt. to set up S/Jongkhar and Gelephu as tourist entry points

A solution for the joblessness

People across the country express gratitude to His Majesty The King

Maokhola bridge on halt due to Covid-19

Maokhola bridge on hold due to Covid-19

Men sentenced for “breach of public order and tranquillity”

Rotavirus vaccination is not cost-effective for Bhutan

Thanking His Majesty for the Kidu

Artificial intelligence and adaptive governance in the corporate sector of Bhutan: the new normal

US Department of State recognises Lt. Col Karma Rigzin for her leadership role to combat trafficking

Risk management at the dry port and customs port in Phuentshogling

People relieved after the announcement of relief measures phase II

Hoteliers express gratitude to His Majesty