10 years on, some of MV Sun Sea's passengers still in limbo after entering Canada as refugees

Piranavan Thangavel, 29, a passenger on the ship, says he's still waiting for permanent residency status while other fellow passengers are waiting for their refugee hearings.

"We are not terrorists. We are not criminals. We are refugees … We came here to save our lives," Thangavel said.

When the ship arrived in Canada, all 380 men, 63 women, and 49 children on board were detained — for months to years.

In the 10 years since his arrival, including eight months spent in detention, Thangavel has learned to speak English, graduated from high school and attended college.

He says he has been able to endure the long wait for status better than most because he is single, but others with spouses or children back in Sri Lanka have fallen into depression because of the uncertainty caused by the immigration limbo.

"I don't know why it takes this long," he said. 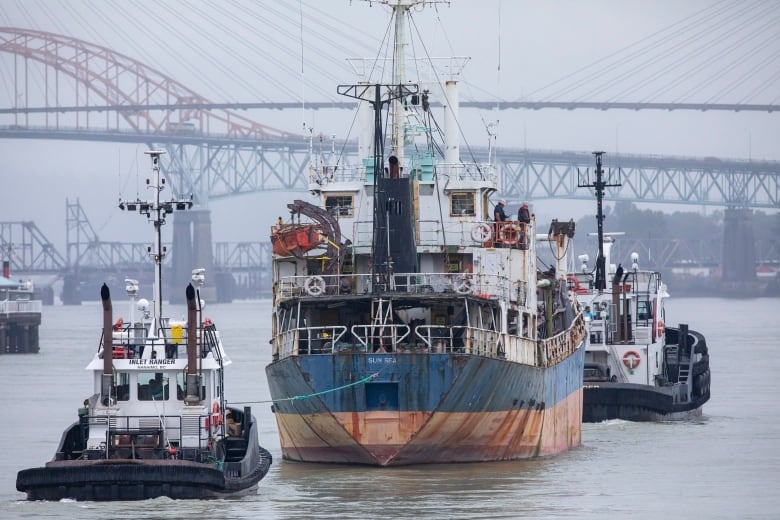 The MV Sun Sea is moved from its dock by tug boats in New Westminster, B.C., in August 2019. (Ben Nelms/CBC)

Gary Anandasangaree, a Liberal MP and human rights lawyer, was in Victoria Thursday morning at a commemorative ceremony for the MV Sun Sea held at the grounds of the B.C. Legislature.

Anandasangaree had met with detainees back in 2010.

"There was a lot of scare-mongering at the time by politicians saying they were terrorists, criminals, undesirables," he said.

"Sure enough, they were not as described and anticipated, they were actual refugees with enormous experiences of trauma."

However, that political context and their subsequent months-long detention delayed the asylum claim process. Then came a shift in laws which led to a delay in processing refugee claims across the board, leading to a long, drawn-out process for many of the MV Sun Sea passengers.

"Someone with a four-year-old now has a fourteen-year-old boy back home who doesn't really remember his father. There's many, many stories like that, I think, which goes to how the system failed on a number of different occasions," he said.

Thangavel says Canada should open its arms to anybody affected by war who comes here seeking refuge and safety.

"I have only one aim. I want to become a good Canadian citizen."

Klopp on 2-0 with Chelsea: Mane was rewarded for Kepa's pressure. Perfect start for Tiago
Liverpool and Everton scored 6 points after 2 rounds of the Premier League. This is the first time since 1993
Lampard on 0:2 with Liverpool: a Serious mistake by Kepa. Without red and with a penalty scored, it would have been 1-1
Mane on Kepa's mistake: Knew he would have few options when he got the ball. He made a mistake, I scored
Will bale be revived at Tottenham?
Tiago broke the Premier League record with 75 assists per half - time-more than any Chelsea player in the entire match
Kroos on captains: Ramos is the best possible option
Source https://www.cbc.ca/news/canada/british-columbia/mv-sun-sea-anniversary-1.5685947?cmp=rss

Singh says NDP focused on getting ‘help for Canadians,’ not forcing an election

LACKIE: There are signs of a softening real-estate market

Majority of Americans, including many Republicans, say wait for election to replace Ginsburg

Man seriously injured after being hit by vehicle in North York

Ahead of Tuesday’s briefing, a look at what Elon Musk has promoted at Tesla events over the years

‘Everything has changed’: N.B. doctor describes racism after COVID-19 outbreak

Hurts active as No. 2 QB for Eagles

Biden to weigh in on Trump’s next Supreme Court nomination, another Republican breaks ranks

U.S. to slap sanctions on over two dozen targets tied to Iran arms

Spot someone not wearing a mask? Here’s what you should (and shouldn’t) do

Aces’ Hamby repeats as Sixth Woman of the Year