A prominent Jewish organization says it is extremely disturbed by reports of Hitler Youth flags being displayed in two Alberta towns within days of each other.

The Friends of Simon Wiesenthal Center for Holocaust Studies says it filed a criminal complaint with RCMP after being alerted on the weekend to Hitler Youth and Confederate flags by a resident of Breton, Alta., about 100 kilometres southwest of Edmonton. 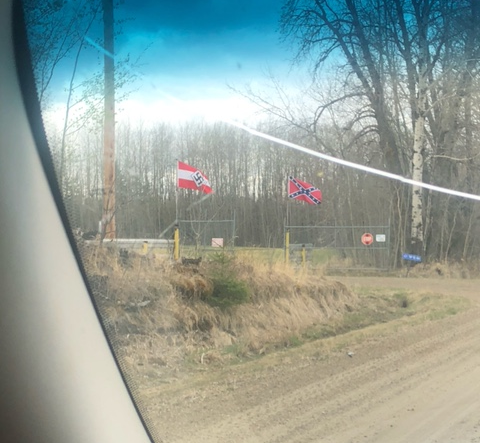 A Nazi Hitler Youth flag and an American Confederate flag flying at a rural property southwest of Edmonton near Breton, Alta. in May 2021. Supplied to Global News

The Toronto-based organization says in a release that the RCMP confirmed that officers spoke to the property owner, who has refused to take down the flags.

Drayton Valley-Devon MLA Mark Smith posted on Facebook that displaying the flags was “disgusting to say the least” and there was “no room for racial discrimination or hate.”

The latest reported incident came less than a week after the Jewish group filed a complaint to the RCMP about a Hitler Youth flag at a property in Boyle, Alta., about 125 kilometres north of Edmonton.

In a recent interview, RCMP spokeswoman Const. Chantelle Kelly said that property owner removed a flag after speaking with officers.

Mounties were not immediately available for comment on the Breton flag, but have said they were investigating whether hate was a factor in the Boyle case.

Indians set to throw another fill-in starter at Orioles

France to continue to use nuclear power for years to come, says minister

In the Habs' Room: Penalties 'killed our rhythm' in Vegas, Ducharme says

Mets sending Taijuan Walker out to keep Cubs at bay

Clippers pull even with Jazz, but Kawhi Leonard leaves early

Suspect in Manitoba death is considered armed and may have police gear, RCMP warn

Philippines’ Duterte will not cooperate with ICC probe into killings

Nationals aim to keep struggling Pirates on the ropes

Public school trustees vote to end police in school program, apologize for harm it has caused

Philippines’ Duterte will not cooperate with ICC probe

‘It tried to eat me’: Humpback whale swallows lobster diver whole and spits him out alive

Defence vice-chief who golfed with Vance steps aside from role, but not from military

Record $128 million up for grabs in Tuesday's Lotto Max