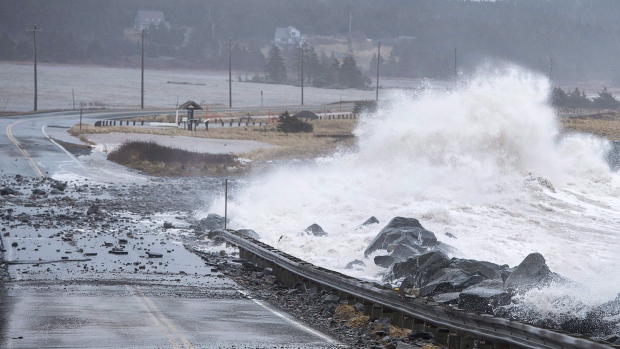 Waves pound the shore on a closed section of Highway 207 in Lawrencetown, N.S. on Friday, Jan. 5, 2018. THE CANADIAN PRESS/Andrew Vaughan

Blair Feltmate, head of the Intact Centre on Climate Adaptation at the University of Waterloo, calls the projections "a wake-up call and a call to arms."

He's reacting to Chapter 7 of "Canada's Changing Climate Report," which projects 75 centimetres to one metre of relative sea level rise for the East Coast.

Federal scientists presented the document earlier this week, noting Canada is warming at twice the rate of the rest of the globe in a now irreversible process.

Feltmate points to predictions for quadrupling of flooding along the Halifax waterfront by mid-century as a signal buildings will have to be constructed to cope with higher tidal surges.

In addition, he says the study highlights the vulnerability of the Chignecto Isthmus -- a low-lying, 20-kilometre band of land that joins Nova Scotia to New Brunswick.

Ocean scientists said in the report that the Atlantic region is facing a dual effect of rising seas and falling coastlines.

It notes that while in much of the country the coast is rebounding from glaciation -- helping counter sea-level rise -- the eastern coasts are continuing to sink.

Wallace, Mackenzie and Hill: Let's include 'walkability' in future plans for Ottawa

Today's letters: A local hero walks among us

Russia warns Britain: do not provoke us again in Black Sea

U.S. no longer sees Taiwan as a problem in China ties, official says

‘It did help’: Ontario woman credits vaccine with saving her life after contracting COVID-19

Montreal weather: Sunshine with a breeze

China, Russia exploiting high-tech in ‘hybrid warfare’ costs up to $100B per year in Canada: report

Psychiatrist breaks the taboo about perinatal depression and anxiety

What to know about relaxed travel measures for fully vaccinated Canadians

Britney Spears wants out. What happens next in her conservatorship?

Despite ancient cat connections, Cyprus is swamped with strays

Huge emergency operation under way after building collapse in Miami

Another mass burial site, navigating COVID-19 expertise : In The News for June 24

Canadians must be savvy in navigating COVID-19 expertise: observers

The world's central banks launch a new campaign against crypto

Indigenous community hurt amid allegations of false identity at Queen's

First round of Russia-U.S. arms control talks could take place in July – RIA

Britain says: don’t get carried away by warship spat with Russia

Bezos’ 2021 Space Odyssey a risk too far for insurers

Biden to meet with bipartisan senators to discuss infrastructure plan

LAFC back in win column by blanking FC Dallas