Eva Skaarup, who’s lived in the home in River de Chute, N.B., for 73 years and raised her 10 children there, is legally blind and hard of hearing.

On Sunday, Skaarup called her son, who lives next door, to tell him she thought the home was on fire. He wasn’t home at the time, but his wife Darlene was.

So it was a terrifying moment for Eva’s daughter-in-law knowing a family member was still inside a burning house. 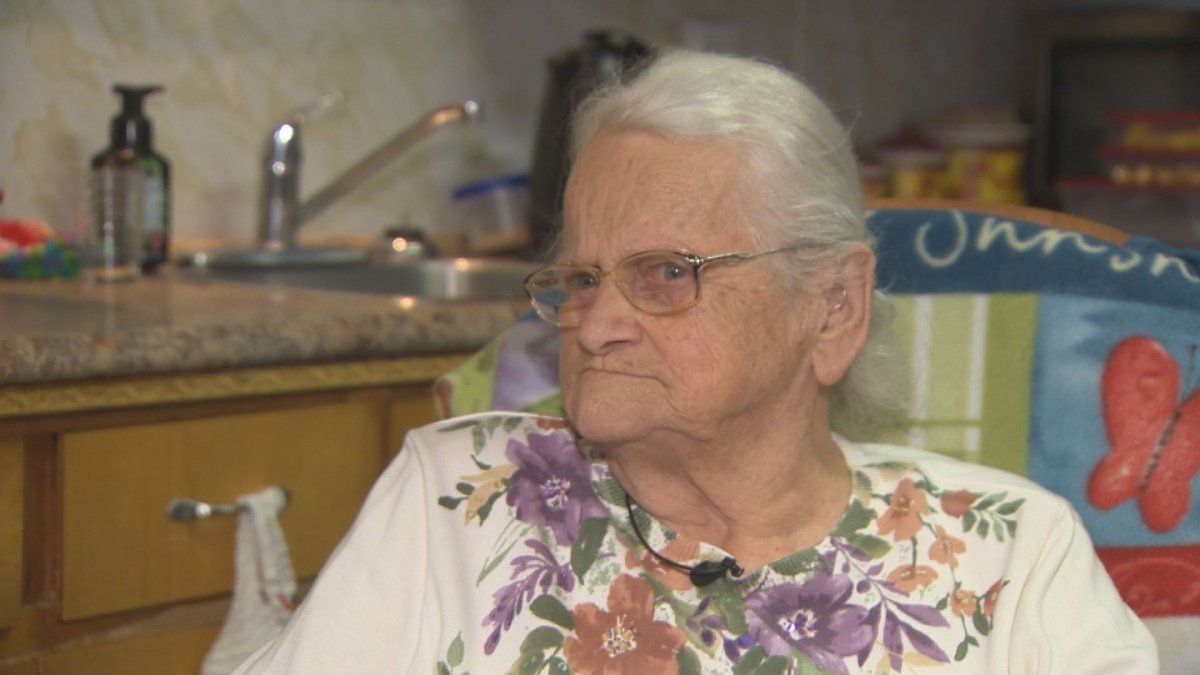 Eva Skaarup, 90, is legally blind and hard of hearing. Despite the odds, she managed to escape her burning home Sunday. Callum Smith / Global News

“Flames were shooting out the windows and through the roof, and I immediately called 9-1-1,” Darlene Skaarup says.

Despite her concern, 9-1-1 dispatchers told her not to enter the burning building.

“I was banging and screaming on the windows and on the door,” she tells Global News. “And then I heard a noise out front.”

She followed her ears to the front of the century-old home, and much to her surprise, her 90-year-old mother-in-law was standing there, cane in-hand.

“I have no idea how she made it out of that house,” Darlene says.

Eva lives with her daughter, Jenny, who wasn’t home at the time.

“I picked up my cane and I walked to the kitchen door and I opened it up,” Eva says. “She was all a fire out there and I thought ‘well I’ve got to get out of here.'”

“You don’t have time to think about too much stuff when you open one door and the whole thing is fire,” an emotional Eva says.

Unable to see, she managed to get through the smoke and flames in the home she’s lived in for more than seven decades — with countless memories to guide her.

“I knew exactly where to go,” she says.

“I’m amazed that she had her wits about her to still get out that door, and knew the direction to go,” her daughter Ruth Sawler tells Global News. “It’s an absolute miracle that she got out of there without a mark.”

“I could never move too fast,” admits Eva. “But this time, I got down the ramp… There was nothing.”

Tragically, her pet dog and cat didn’t make it out. And a lifetime of memories were lost.

“The house was full — and the walls were filled — with pictures,” she says.

She’s grateful a few photos were recovered, and although she might not be able to see them well, they’re as precious as the time she spent raising her kids in the home.

She’s a hero, says her family. Blind but determined — and humble to boot.

“It sure was a miracle,” Eva acknowledges. “Because I think nothing but the Lord helped me through that.”

Eighteen volunteer firefighters from Perth-Andover, Centreville and Florenceville-Bristol responded to the emergency call.

Perth-Andover Fire Chief Philip Walker says “the structure was fully involved” when they arrived on scene and it was “pretty well history.”

He says the wind was working against them and they had to prevent the fire from spreading to nearby trees.

As for Skaarup’s escape, he says “I’m not quite sure how she managed it.”

He says the first crew of volunteer firefighters arrived on scene 21 minutes from the initial call, which came in at 2:28 p.m. Sunday.

Walker says that time is “probably very good” considering the distance they had to travel, “but still, the house was totally engulfed. When we arrived there, you could pretty much see through the structure, it was burning that bad.”

🎮 We made a game about Khabib - fight for him and try to fill up Geiji
Tebas about klasiko: the Game of the best teams in the world. The most important match of club football
Leeds forward Bamford scored a hat-trick. He has 6 goals in 6 Premier League games
Moyes on the spectators in the stadiums: People watch matches in cinemas, why can't they do it on the street?
Gerard Pique: Extending a contract and signing a burofax are two different things. I defended the Interests of the team
Thibaut Courtois: Messi and Ronaldo are some of the best players in history
Jack Wilshere: Everyone thinks I'm 30-31, not 28. I Feel like I can still do a lot
Source https://globalnews.ca/news/7371899/90-year-old-n-b-woman-escapes-fire/

Hickey on hockey: Women's hockey gets a boost with Dream Gap Tour

N.S. Assembly of Mi’kmaw Chiefs say feds have failed them amid discussions with DFO

EDITORIAL: Let’s talk about the positive COVID-19 news out there

Buccaneers confident game vs. Raiders will be played

A 2014 Wiggles Song Is Going Viral For Stereotyping Indian People

B.C. won’t know the results of Saturday’s provincial election for at least three weeks. Here’s why

SCRAWLER: The Biebs shines as Gordon Lightfoot waits for coast to clear

Women encouraged to still get mammograms during COVID-19 pandemic

British Columbians willing to pay more for locally grown food, but not much more

Saskatchewan Politics Treat Disability As An Afterthought. This Election's No Different.

Thousands protest across Poland against curbs on abortion access

Pandemic rattles the soul of higher education in B.C.

As standoff at ‘1492 Land Back Lane’ heats up in Caledonia, land defenders say, ‘This is a moment for our people to say no’

‘I was really freaked out’: Will Jordan testifies on Day 4 of trial

Brownstein: Is it too late for the city's aid to beleaguered downtown merchants?

About 65 to 70 per cent of ballots will be counted on voting day, Elections BC says

Taxi driver charged in connection with sex assault of woman he met on the job: London police

This Week in History: 1921 An operatic femme fatale sets off an international scandal

How COVID-19 is impacting Remembrance Day ceremonies in Manitoba