LONDON — From an Aston Martin DB5 stunt car to costumes worn by Daniel Craig in “No Time to Die,” an array of James Bond props and memorabilia are being sold at a charity auction as the film franchise celebrates 60 years.

Oct. 5, 1962 was the date of the world premiere for the first film about the suave British secret agent – “Dr. No.”

Leading the lots was the car used for some adrenaline-packed stunts in “No Time to Die” amid the stunning backdrop of the cave dwellings of the Italian city of Matera.

“Externally it looks exactly like the DB5 that we all associate with James Bond, internally (it’s) a completely different beast to be capable of all the incredible stunts and the driving that they did in Matera,” Adrian Hume-Sayer, director of private and iconic collections at Christie’s as well head of the James Bond sale, told Reuters.

Other lots sold on Wednesday include a signed “No Time to Die” clapperboard, as well as costumes worn by the film’s cast members. 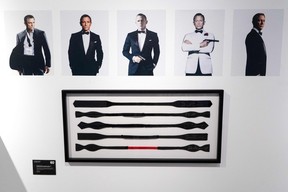 Black bow ties, signed and worn by British actor Daniel Craig in the five James Bond films he starred in, are displayed during a photocall ahead of the “Sixty Years of James Bond” auction at Christie’s auction house in London on Sept. 26, 2022. Photo by NIKLAS HALLE'N /AFP via Getty Images

Other costumes and props from the Bond movies will also be sold in part two of the live auction, with bidding ending on next Wednesday.

Proceeds from the two “Sixty Years of James Bond” auctions, with a total of some 60 lots, are going to different charities.

Various events are planned to mark the anniversary as Bond fans speculate who will next play the character.

“Well, right now we’re not thinking about the next chapter yet, we’re just celebrating the release of ‘No Time to Die’ and our 60th anniversary,” producer Michael G. Wilson told Reuters.

“And I think when this is over by the end of this year, next year we’ll start to think about where do we go from here.”

– with files from Postmedia Network

To fight the climate crisis, we need to stop expanding offshore drilling for oil and gas

SIMMONS: Another last chance for Bonds, Clemens and the Baseball Hall of Fame

Suspect sought in theft at caisse populaire in Montreal North

Vancouver fashion, wellness brands give back on Giving Tuesday

Iowa State puts No. 23 ranking to test vs. North Dakota

Fakolade: How to support family caregivers, our unsung heroes

Teen asks for help disposing body on Instagram video chat. Is then arrested for homicide

‘GREG’S GOT TO LEAVE’: Tiger Woods says no end to stalemate with LIV CEO

Golf-‘Greg’s got to leave’: Tiger says no end to stalemate with LIV CEO

‘All kinds of things to offer that isn’t money’: How young Canadians are giving back differently

Typical temps Tuesday then it's warm, wet and windy Wednesday

'No evidence at the time' of foreign interference in 2019 federal election, Lucki says

Dwayne Johnson redeems himself years after stealing Snickers from store

US consumer confidence falls in November for 2nd month

Saudi Arabia extends terms of $5 billion in aid to Egypt

Chinese authorities seek out protesters to explain themselves

Canadian economy grew at annualized rate of 2.9% in third quarter

CHARLEBOIS: We all must do our part to stop Avian flu spread

‘An upward trend’: Police in York Region warn residents of rise in break-ins

Soccer-Denmark goal drought is no joke for Hjulmand

Have you seen these people? Winnipeg’s most wanted for November

Senate to vote on landmark bill to protect same-sex marriage