Israa Seblani was showing off her wedding dress in a ritzy downtown Beirut square on Tuesday when a massive explosion rocked the city’s port, toppling buildings and covering the area in smoke.

Footage captured by Seblani’s wedding photographer, Mahmoud Nakib, shows the moment when the shock wave hit, turning a special moment into a mad scramble for all involved.

The clip starts with Seblani smiling and standing still while Nakib approaches her with a camera to show off her white bridal dress. He pans around her face, then brings the camera down to show off her train.

Nakib realizes something is wrong a second before the blast sweeps over the entire scene.

“Allahu Akbar,” Nakib he says. “God is the greatest.”

The camera is pointed at Seblani’s feet when the first shock wave hits, blowing away her bouquet and billowing her dress out behind her. 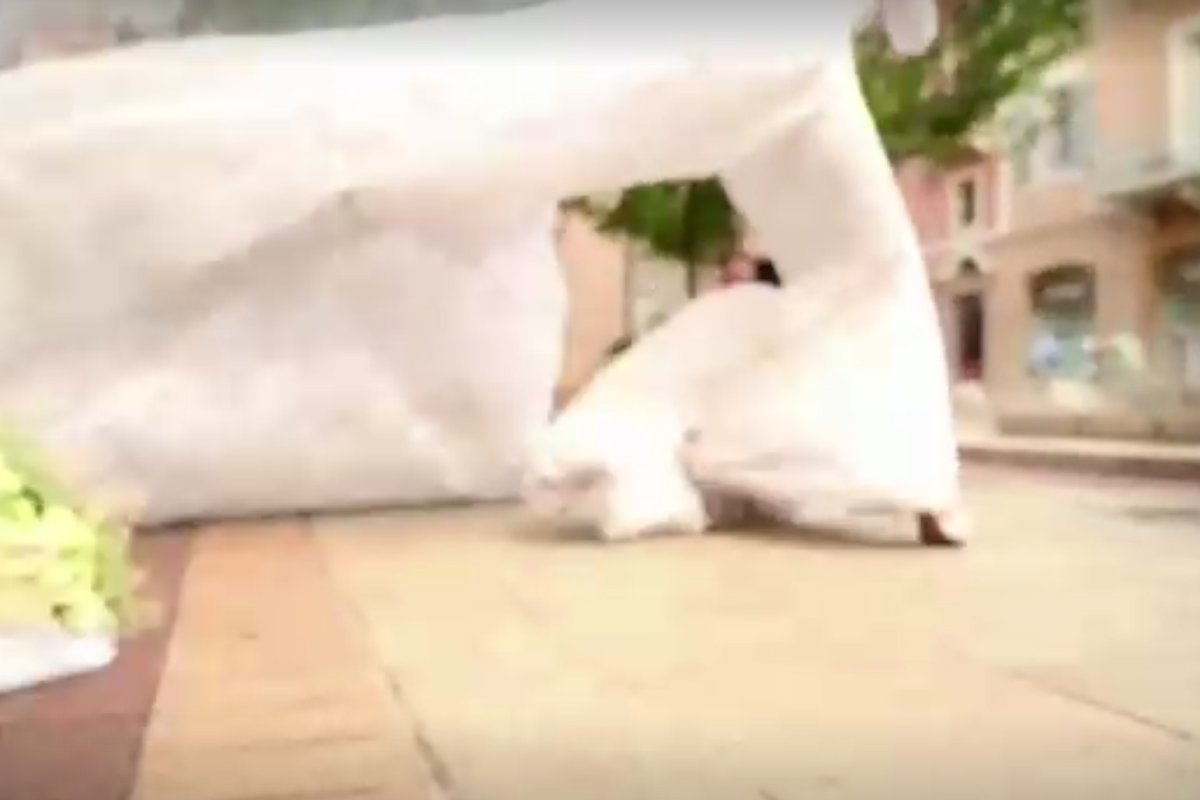 Bride Israa Seblani’s dress is blown out by an explosion in Beirut, Lebanon on Aug. 4, 2020. Mahmoud Nakib/Reuters

Smoke blankets the area and glass rains down on the street, tinkling onto the pavement amid the roar of the explosion.

The photographer turns the camera to look down the street toward a cloud of smoke, then rushes to a wall on the other side of the street.

Nakib then points the camera back toward the square, where the bride and several men in suits can be seen rushing into a nearby building for cover. Bells and alarms are going off in several nearby buildings.

The square, which was bathed in golden light a few moments earlier, is now blanketed by grey dust.

Extended footage from the incident shows Nakib following the bride and groom down the street. The groom and another man can be seen helping Seblani with her dress, which appears to be in disarray after the blast.

The footage also shows trees and outdoor furniture scattered everywhere. Many windows appear to be broken and the hotel courtyard is littered with debris.

The explosion happened Tuesday evening at Beirut’s port, where officials say a fire set off more than 2,700 tonnes of explosive ammonium nitrate at a warehouse. The blast killed more than 100 people, injured thousands more and obliterated nearby buildings.

The explosion also damaged many structures within several kilometres of the blast zone, and was felt as far away as Cyprus, an island some 200 kilometres away.

The square where the photoshoot took place was approximately one kilometre southwest of the explosion’s origin point, Google Maps shows.

Nakib says he and the couple were unharmed by the explosion. He told Storyful that they all took refuge at a nearby house and had dinner together at a restaurant later that evening.

Olas on Depay and Aouar: those who do not have time to leave before October 2, will remain in Lyon
Liverpool pinned Arsenal: Robertson brought, but corrected, Jota scored the team's 400th goal in the Premier League under Klopp
Zhota about the 1st goal for Liverpool: an Incredible feeling. It's a pity the stadium wasn't full
Mikel Arteta: Liverpool is the standard that Arsenal must achieve. They are superior to us in many aspects
Leicester lead the Premier League after three rounds. Liverpool and Everton also scored 9 points
Jurgen Klopp: Roy Keane said Liverpool showed sloppy football? I want to hear it. Incredible game description
Manchester City refused to buy Coulibaly after the transfer of Dias
Source https://globalnews.ca/news/7251853/beirut-explosion-wedding-video/

Pronghorns golfers the lone U of L team in action this fall: ‘It’s a privilege’

Over 1 million people have now died of coronavirus worldwide

B.C. Election 2020 Reality Check: Who benefits from eliminating the PST? And who doesn't.

Fucsovics sends Medvedev to another early exit at French Open

Some concerns about Saskatoon housing project flagged as biased, exclusive

Environmental group accuses CPP of breaking its rules with third-party donations in U.S.

Allison Hanes: Red alert might have been avoided with earlier action

Family rallies to help Sophia, an orphan of the overdose crisis with rare genetic abnormality

Ford not so revved by car show

COVID-19: What is and isn't restricted in Montreal during red alert period