The White House said U.S. President Joe Biden expressed "support" for a ceasefire in a call to Israeli Prime Minister Benjamin Netanyahu on Monday, the eighth day of fighting between Israeli forces and Palestinian militants in Gaza.

"The president expressed his support for a ceasefire and discussed U.S. engagement with Egypt and other partners towards that end," the White House said in a statement.

Biden's move signals U.S. concern for an end to Israel's part of hostilities with Hamas, although it falls short of joining growing Democratic demands for an immediate ceasefire. The White House says the president reiterated his firm support for Israel's right to defend itself against indiscriminate rocket attacks.

The U.S., Israel's top ally, also blocked for the third time what would have been a unanimous statement by the 15-nation United Nations Security Council expressing "grave concern" over the intensifying Israeli-Palestinian conflict and the loss of civilian lives. The final U.S. rejection Monday killed the Security Council statement, at least for now.

Earlier on Monday, the Israeli military unleashed another heavy wave of airstrikes on the Gaza Strip, saying it destroyed militant tunnels and the homes of nine Hamas commanders. International diplomacy to end the weeklong war that has killed hundreds appeared to make little headway.

Israel has said it will press on for now with its attacks against Hamas, the militant group that rules Gaza. The latest attacks destroyed the five-storey building housing the Hamas-run Religious Affairs Ministry, a building Israel said housed the main operations centre of Hamas' internal security forces.

Israel also killed a top Gaza leader of Islamic Jihad, another militant group which the Israeli military blamed for some of the thousands of rocket attacks launched at Israel in recent days. Israel said its strikes destroyed 15 kilometres of tunnels used by militants.

According to the Gaza Health Ministry, at least 212 Palestinians have been killed in the week of airstrikes, including 61 children and 36 women, with more than 1,400 people wounded. Ten people in Israel, including a five-year-old boy and a soldier, have been killed in the ongoing rocket attacks launched by Palestinian militants from civilian areas in Gaza toward civilian areas in Israel.

Violence has also erupted between Jews and Arabs inside Israel, leaving scores of people injured. On Monday, a Jewish man attacked last week by a group of Arabs in the central city of Lod died of his wounds, according to police.

Hamas and Islamic Jihad say at least 20 of their fighters have been killed, while Israel says the number is at least 130 and has released the names of and photos of more than two dozen militant commanders it says were "eliminated." The Gaza Health Ministry, which is controlled by Hamas, does not give a breakdown of how many casualties were militants or civilians.

'As long as necessary'

Netanyahu met with top security officials on Monday evening and later said Israel would "continue to strike terror targets" in Gaza. "We will continue to operate as long as necessary in order to return calm and security to all Israeli citizens," he said.

The new airstrikes, which hit Gaza overnight Monday and again in the evening, hollowed out one floor of a multistorey concrete building and killed five people. Gaza City's mayor, Yahya Sarraj, said the strikes had caused extensive damage to roads and other infrastructure. He said water supplies to hundreds of households were disrupted.

"We are trying hard to provide water, but the situation remains difficult," he said. 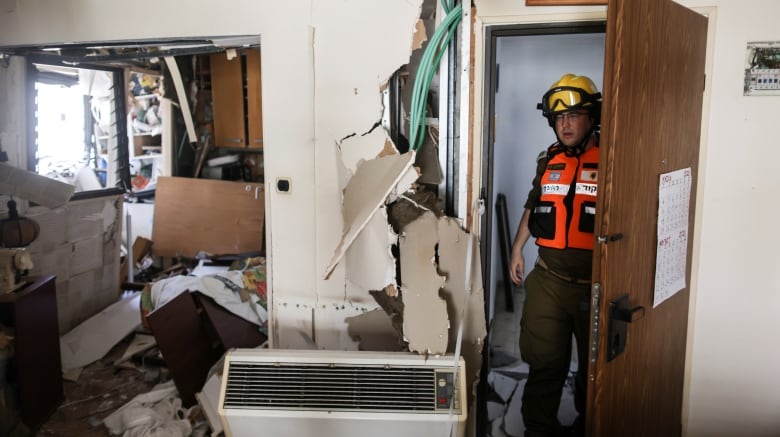 An Israeli officer enters to check an apartment in a damaged building in Ashdod, Israel, on Monday following a rocket attack from Gaza. (Ronen Zvulun/Reuters)

The United Nations has warned that the territory's sole power station is at risk of running out of fuel. Gaza already experiences daily power outages for between eight and 12 hours, and tap water is undrinkable. Mohammed Thabet, a spokesman for the territory's electricity distribution company, said it has fuel to supply Gaza with electricity for two or three days.

Palestinian officials said Israel pledged to open its only cargo crossing with Gaza for several hours on Tuesday to allow humanitarian aid — including fuel, food and medicine — to enter. The Kerem Shalom crossing is the main entry point for goods entering the territory.

Israel also said it targeted what it suspected was a Hamas submersible weapon preparing for an attack on Israel's coast.

The war broke out May 10, when Hamas fired long-range rockets at Jerusalem after weeks of clashes in the holy city between Palestinian protesters and Israeli police. The protests were focused on the policing of a flashpoint sacred site during the Muslim holy month of Ramadan and over a legal case in which eight Palestinian families face losing their occupied East Jerusalem homes to Jewish settlers.

More protests were expected across the region Tuesday in response to a call by Palestinian citizens of Israel for a general strike. The protest has the support of Palestinian Authority President Mahmoud Abbas's Fatah party.

Hamas' top leader, Ismail Haniyeh, who is based abroad, said the group has been contacted by the United Nations, Russia, Egypt and Qatar as part of cease-fire efforts but "will not accept a solution that is not up to the sacrifices of the Palestinian people."

Mancini's Italy have 30 consecutive games without defeat. This is a repeat of the record of the national team
37-year-old Pandev will finish his career in the national team of North Macedonia after Euro 2020
Do you know why there are names on the T-shirts of the Turkish national team? Surnames in the country appeared later than football - only in 1934
The first direct red card at Euro 2020 is shown to Wales defender Ampadu for a foul on Bernardeschi
UEFA may fine the German Football Union for Neuer's LGBT armband
Griezmann on Benzema: He's a big help to France. There are moments - and this is the main thing
5 Italian players did not kneel before the match with Wales

Students raise $200,000 to save bean-roasting shop that provides support to disadvantaged women in DTES

'Canada Dry': Hot, dry weather expected in throughout Canada this summer as B.C. grapples with heatwave

Hold music on government lines must be made in Quebec, minister announces

Biden to meet with Afghan President Ghani as violence surges

Nationals select contract of OF Gerardo Parra from Triple-A

Milos Raonic pulls out of Wimbledon with calf injury

Check your Lotto 6-49 tickets: Someone in B.C. won half of Saturday's $6 million jackpot

Kawhi Leonard, Chris Paul out for Game 1 of Western finals

Soccer-Changes for both Swiss and Turks in must-win game

Soccer-Italy coach Mancini rings the changes for visit of Wales

Soccer-Ukraine will not play for a draw against Austria, says Shevchenko