Cases of COVID-19 are declining in many parts of Canada, but experts say those early positive signs are dependent on widespread restrictions.

Quebec, now under a province-wide curfew, has seen new cases decline. Ontario has showed 10 consecutive declines in its seven-day average, a metric that helps to spot long-term trends compared to daily numbers that can spike up and down.

Caroline Colijn, an infectious disease modeller at Simon Fraser University, said most of the provinces seem to be declining.

"Ontario's kind of uncertain, Saskatchewan's growing still or again, but the rest are kind of flat or declining," said Colijn, who also holds a Canada Research Chair in mathematics for evolution, infection and public health.

"That's the first decline we've seen in Quebec and Ontario for quite a while," she said. "In our models, it looks like a genuine decline."

In B.C., for example, Colijn said the epidemic is stabilizing with strict measures such as telling people not to socialize outside their household.

But Colijn fears Ontario's stay-at-home order, Quebec's curfew and restrictions in other provinces aren't solutions that people can sustain for months.

If people don't limit their number of contacts with others then cases will start to climb again until vaccinations reach the general population.

"Unless we want to do this for six months, we do need to be thinking about throwing other tools that we have available at this problem."

Researchers at Dalhousie University in Halifax are working on a 3D-printed ball that can collect a building's sewage and test the water for coronavirus. They say the tool could be used to trace outbreaks and to test the effectiveness of vaccines.

Colijn said widespread restrictions, symptomatic testing and contact tracing remain cornerstone tools. But those tools should be supplemented with wider rapid testing technologies coming to the fore, which Colijn believes could support re-opening the economy.

Federal and provincial scientists are validating rapid tests, currently used at remote mines as well as the film and airline industries, for more widespread use.

Sask. heading in the wrong direction

Nazeem Muhajarine, an epidemiologist at the University of Saskatchewan, divides the country's into three main groups based on per-capita case counts:

Muhajarine is concerned about the steep climb in COVID-19 deaths in the Prairie province.

In the first 21 days of the month, another 84 people have died in Saskatchewan.

"We really need to reverse course," Muhajarine said. "To do that, we need very strict measures with a stay-at-home order and enforcement of orders. When we see the case numbers reverse course, we have to get our testing, tracing and isolation regime back up."

Restrictions on retail stores, restaurants and bars could help bring cases, hospitalizations and deaths down given how Saskatchewan is "stretched to the limit," he said.

Even places with early signs of decline, like Ontario, will see hospitalizations and deaths continue to climb for a period because of the lag time from new infections in December, health experts say. 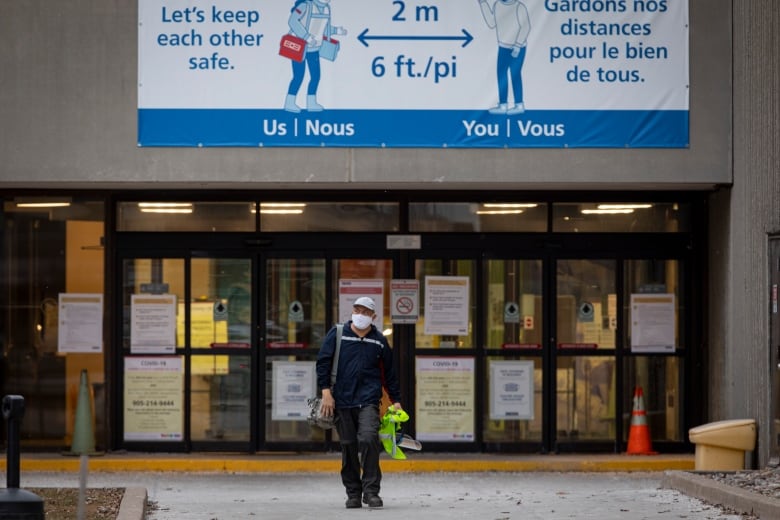 A worker at the Gateway Postal facility, in Mississauga, Ont., on Wednesday. Canada Post confirms a major outbreak of COVID-19 at the plant — the largest mail facility in the country that reflects how cases continue to occur among essential workers. (Evan Mitsui/CBC)

"We're now more than two weeks past what would be the New Year's surge," Chakrabarti said, referencing people socializing over the holidays despite advice from public health officials and politicians to stay at home.

Now that the holiday peak in new cases is over, regular winter transmission of the virus is happening in the population, he said.

Chakrabarti recalls how during the province's first wave in the spring, cases came down and then were stuck at a plateau for months, which he said could happen again.

The key, he says, is to tackle where transmission is still happening: essential workplaces.

"We were seeing people getting infected at work and then bringing it home to their family, where it was being amplified," he said of the first wave. "That's still happening and something a lockdown doesn't address."

It's why Chakrabarti and others advocate for:

"Yes, there are some people who are breaking the rules," Chakrabarti said. "But we also need to look at the very different industrial setups because these factors are huge, right? This is one of the reasons why things haven't ever really turned quickly in Ontario."

Messi scored his 13th goal in La Liga in 2021 - the best result of the top 5 leagues in Europe. Levandowski has a goal less
Bale has scored 4 (2+2) points in his last three matches for Tottenham
Messi scored in the 7th La Liga match in a row and led the list of scorers
Promes returned to Spartak - what do we expect from him?
Javier Mascherano: Barcelona is a special club. It is difficult to find a team with the same ingrained philosophy
Dybala flew to Barcelona for a checkup with a surgeon. He is still concerned about a knee injury
Everton have extended their contract with Ding until 2025
Source https://www.cbc.ca/news/health/covid-19-cases-7-day-average-1.5882530?cmp=rss

Italy landslide dumps hundreds of cemetery coffins into the sea

The Tragically Hip to receive humanitarian award at 2021 Junos

‘Minefield’ of variants: How the California strain is different from the others

Lockdown for Dunkirk, other areas under watch as French COVID-19 cases spike

Coronavirus: 10 new cases in London-Middlesex, 4 total in nearby regions

Health professionals being recruited as B.C. ramps up for mass COVID-19 vaccination

NDP will not trigger election as long as pandemic continues: Singh

Glavin: On China's genocide, Canada's House of Commons had to take matters into its own hands

Olympics-Tokyo Games refugee team to be finalized in June – IOC

Arrest made in theft of generators at Lindsay construction site: police

Looking to win their eighth straight, Nets take on Magic

Residents of rural Osoyoos get their say on official community plan

Vaccine FAQ: What you need to know about the COVID-19 shot

International: 30 bestselling books for the week of Feb. 20

FUREY FACTOR: Why we should keep schools open

Being Black on campus: Why students, staff and faculty say universities are failing them

Weekend lockdown for Dunkirk area as 10 departments under watch