The relationship of the two controlling owners of the Toronto Star is “irrevocably impaired” and in a “deadlock,” so much so one partner is asking the court to force the company’s sale and split the loot.

Jordan Bitove and Paul Rivett were friends for a decade before they bought Torstar, a media company that owns the Star along with other Ontario newspapers and business interests, in 2020.

The company was an equal partnership.

That partnership is now in ruins and both want a divorce, a court filing says.

“Starting in or about March 2022, the relationship between Rivett and Bitove began to break down and has now been irrevocably impaired,” says a lawsuit filed by Rivett’s companies, against Bitove and his companies.

The unusual solution sought by Rivett is for the company to be sold under a court order and each partner takes his money as he leaves, or perhaps one or the other buys full ownership.

It’s a stark break from how the pair burst onto the scene in May 2020, when their surprise $60-million purchase was announced.

“They make a great team,” the Star crowed in its story on the new owners. “One is the details guy, the other wants to be at the forefront.”

The two front men were all smiles as they announced each was taking a senior role within the company, signalling it wasn’t just a passive investment for others to nurture.

Bitove was named as the new publisher of Toronto Star, the flagship newspaper, and Rivett as chair of Torstar, the corporate umbrella. Company documents refer to them both as “co-proprietor.”

The court filing by Rivett, however, paints a picture suggesting Bitove became deeply enamoured with journalism, perhaps at the expense of the business mission, apparently to Rivett’s dismay.

Bitove, the lawsuit alleges, has prioritized his role as newspaper publisher over his responsibilities as a director, officer and fiduciary of the corporate interests, putting the future of the company at risk.

“Bitove has ignored Nordstar’s agreed-to prime objective that Nordstar’s business be carried out in common with a view to profit. The areas managed by Bitove are continuing to operate without budgets or plans,” the lawsuit alleges.

At the start of their business venture, the lawsuit says, “Rivett and Bitove would discuss and jointly decide on material new business developments on an informal basis as required.”

None of the allegations have been proven in court. Rivett and Bitove could not be reached for comment prior to deadline and a request for comment from Torstar went unanswered. Bitove and the other defendants have not yet filed a statement of defence.

Both men agree the news business is tough these days.

“Similar to other traditional news media companies, the Toronto Star is competing in an industry facing various existential threats,” the lawsuit says. 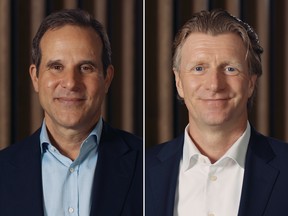 Jordan Bitove, left, and Paul Rivett bought media company Torstar in 2020, but the partnership is now in ruins. Photo by Files

The pair worked to respond to the challenges. The company branched out into sports betting and an online casino, and parcel delivery.

But they haven’t seen eye-to-eye lately.

Much of the friction seems to be about finances, but also in a battle over vision for the company’s future.

To ensure the newspapers’ “long-term viability in a challenging market,” Rivett’s lawsuit says, he spearheaded a move to bring costs at the Star and its other papers “into line with those of other comparable news organizations.”

“Despite agreeing to these changes, Bitove obstructed progress by refusing to make the necessary and agreed-to plans for those areas of Toronto Star’s business over which he was responsible as Publisher,” the lawsuit claims.

“In particular, he refused and failed to make the required changes with respect to unnecessary corporate overhead costs. He then began to object to the changes and demanded that the agreed-to changes be stopped, and he started to deny that the changes were ever agreed to.”

Bitove, the lawsuit claims, also has a plan to fire several “senior and indispensable employees” that Rivett said will hurt the company.

The employees allegedly in the firing line are not itemized in the claim. Elsewhere in the suit, however, Rivett asks that Torstar be prevented from terminating the employment of Marina Glogovac, Anne Marie Owens, Neil Oliver and Ian Oliver pending the sale or transfer of Torstar — as well as Rivett himself.

Glogovac is chief executive officer and president of the Toronto Star; Neil Oliver is president and CEO of Metroland Media Group, which runs Torstar’s six other daily newspapers and 70 community newspapers; Ian Oliver is CEO and co-owner of a group of companies, including Metroland Parcel Services; and Owens was named the Star’s editor-in-chief last year. She previously was editor-in-chief of National Post.

Rivett claims Nordstar, the parent company the pair used to buy Torstar, is in breach of obligations to its creditors. To resolve it, they were to sell some corporate real estate assets, but Bitove halted that as well, the lawsuit alleges.

In August, Bitove resigned as one of two directors of Nordstar, appointing Bill Aziz to represent his family’s interests. Even so, the lawsuit says, Bitove attended the Nordstar board meeting on Aug. 15 — over Rivett’s objections.

The meeting seems to have been a hostile mess.

Rivett’s lawsuit says Aziz presented motions to unwind many of the board’s decisions and voted against Rivett’s motions to implement business changes.

“The meeting ended in deadlock,” the lawsuit says.

Bitove then tried to move his changes forward through the Torstar board, the lawsuit alleges. The suit says this would be a more friendly environment because there are three people voting not just two. Along with Bitove and Rivett, a third director, Frank Penny, sits on the board. The suit says Penny is a Bitove family friend.

Bitove’s proposed resolutions, the suit claims, would give him sole authority over employee terminations and a delay on restructuring

Rivett says in the court filing the moves are “ill-conceived as they will cripple the proper operation of the companies.”

Attempts to divide their assets have failed, according to the lawsuits.

“Only an immediate wind-up of Nordstar will allow Torstar and the other companies to proceed under one unified direction under the leadership of whichever partner acquires the various companies,” the suit says.

The lawsuit asks a judge to make a series of interim restraining orders on leadership changes and spending prior to the case being heard.

The suit was filed Sept. 2 in Ontario Superior Court of Justice by Tevir Investments Inc., Rivett’s Toronto-based holding company that owns one half of Nordstar, which in turn owns Torstar.

It names as defendants five corporations and Bitove and Penny.

Get the latest from Adrian Humphreys straight to your inbox

Filip Rebraca leads Iowa to blowout of No. 20 Iowa State

FedEx driver says he strangled girl, 7, in van after hitting her during delivery

Peter McKnight: Any changes to law on human gene editing should be after public consultation

Witness to many of sports’ greatest moments, Steve Simmons shares the stories in new book

Officer injured in shooting amid tension in northern Kosovo

2 lawyers and a former US attorney will probe UVA shooting

Central Okanagan Food Bank has 25 per cent increase in demand

SO, WHAT’S $32 BILLION?: Feds in no hurry to recover COVID overpayments

2 people taken to hospital after collision in Toronto

Advocates seek funding for free contraception in next B.C. budget

LILLEY: If private clinics are allowed inside public system for abortion, why not other surgical procedures?

Racial slur during Valleyfield Midget A game leads to suspension

N.B. lawyer who was Brian Mulroney’s best friend dies at 85

Vaughn Palmer: Frustrated David Eby can only blame his predecessor for election speculation

Back to winning, Nets out for more vs. Hawks

Tage Thompson, Sabres out to keep offense going vs. Penguins

2 arrested after pair of B.C. women held against their will in U-Haul van

BoC shifting from how much to raise rates to whether to raise them: Deputy Governor

‘Slow down’: More than a dozen snow plows hit this season in southern Alberta

Venezuela talks with opposition unlikely to resume this year