Four new cases of COVID-19 were reported in the City of Kawartha Lakes on Thursday.

According to the Haliburton, Kawartha, Pine Ridge District Health Unit, there were also no new cases reported in Northumberland and Haliburton counties. The number of active cases for the health unit as of Thursday afternoon is now at 21, down from 24 reported on Wednesday.

The 21 cases include 11 in the Kawarthas and 10 in Northumberland County and none in Haliburton County.

Of the health unit’s 1,037 cases since the pandemic was declared, 962 are now resolved, or approximately 93 per cent.

There remain 14 variant of concern cases for the health unit and these consist of a dozen cases in Northumberland and two in the Kawarthas.

However, the number of high-risk contacts increased on Thursday to 91 from the 82 reported on Wednesday. 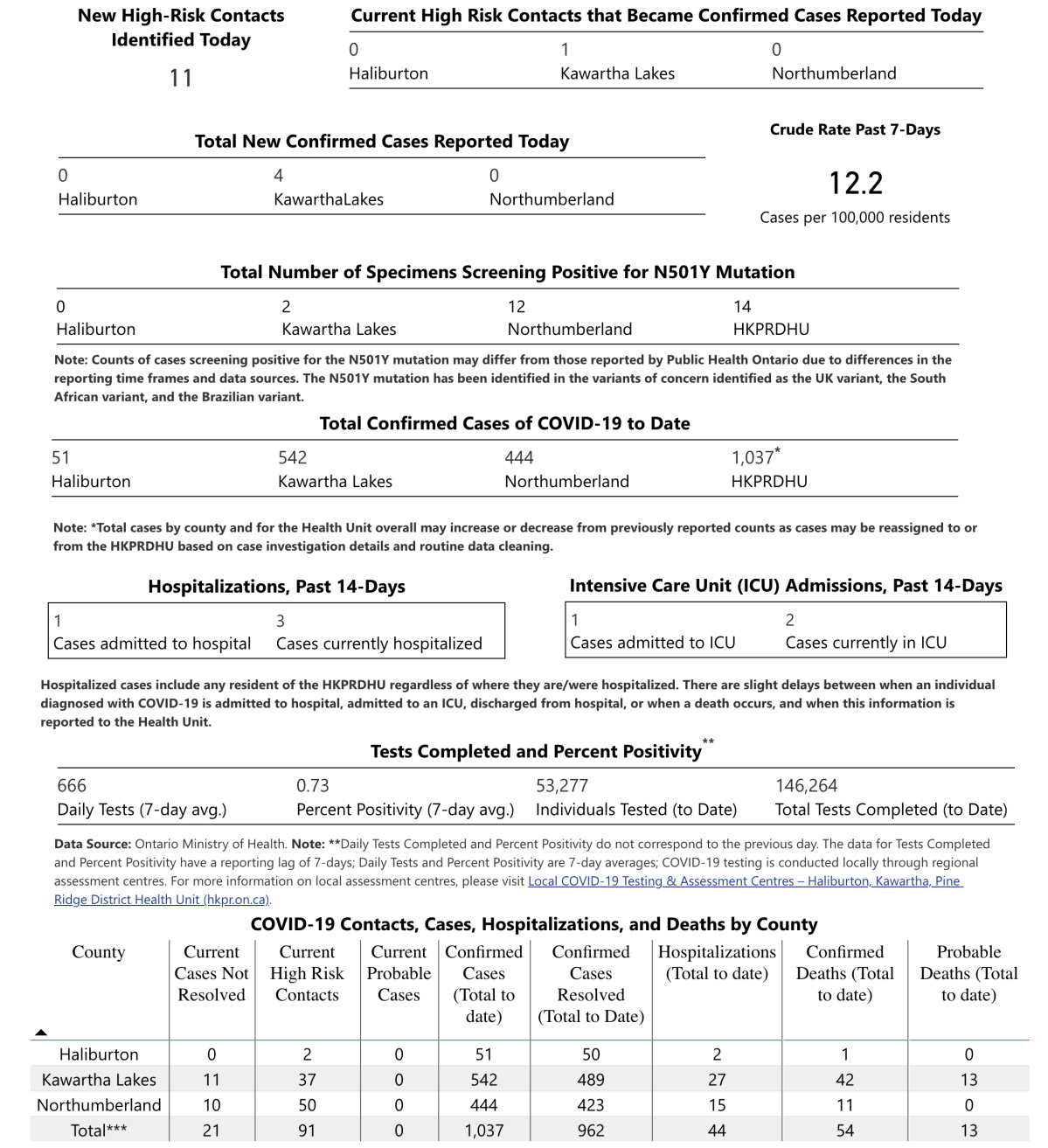 Also on Thursday, the health unit reports three people are currently receiving hospitalized care, one more since Wednesday’s update. Two of the three patients are in an intensive care unit. Ross Memorial Hospital in Lindsay reports that it does not currently have any COVID-19 admissions as of noon Thursday.

The only active outbreak for the health unit is at Regency Place long-term care and retirement homes in Port Hope. The outbreak was declared on Jan. 30 after a staff member tested positive.

The death toll from COVID-19 remains at 66 for the health unit: 55 people in the Kawarthas — which included 28 residents at Pinecrest Nursing Home in Bobcaygeon in the spring 2020 and 18 residents at Caressant Care McLaughlin long-term care in Lindsay following an outbreak in January which was declared over on Monday.

There have also been 11 deaths in Northumberland County and none in Haliburton County.

The hospital says once all residents have received their first vaccination, the hospital will then vaccinate its highest priority healthcare workers per the health unit’s direction and in accordance with the provincial phased approach to vaccination rollout.

“Close to 70 CMH staff have already been vaccinated thanks to Northumberland Hills Hospital (in Cobourg), which has been serving as a central vaccination clinic for the highest priority healthcare workers in the HKPRDHU,” the hospital stated.

Koeman on the future: It's strange to have to answer such questions. We had a 19-match unbeaten streak
Hans-Dieter Flick: After relegation from the Champions League, I can't sleep well. My eyes can confirm that
Tuchel is Interested in the option of inviting Varane to Chelsea
Barry Ferguson on Kudela's ban for racism: 10 matches is ridiculous. It was necessary for a year
Saka-Europa League Player of the Week
Zhemaletdinov's agent about negotiations with Loko: Leonchenko offered to meet, and then wrote: I'm sorry, I can't. Ask him questions
In 2018, Dzeko supported a defender from the Roma youth team, who tore both ligaments in his knee. The kid came back and gave the assist to Edin

2 new deaths as Saskatchewan’s active COVID-19 cases rise back over 2,600

Rex Murphy: O’Toole is digging a political Grand Canyon there will be no getting out of

BC Parks to receive $83 million over three years for more campsites, trail improvements

U.S. preliminary plan on Afghanistan is to remove at least some contractors -Pentagon

Prince Philip customized a Land Rover hearse for his own funeral

At least 40 migrants drown in shipwreck off Tunisia

Editorial: As days lengthen, 8 p.m. curfew is too early

‘Quite fitting.’ Prince Philip’s funeral an online event for all but a few in Canada

What needs to be considered before introducing vaccine passports?

What the Puck: Weber's woes symbolic of Canadiens' recent struggles

Suspects caught on camera in West Kelowna break and enter

Fab 5: Every day can be Earth Day

Style File: For the love of (sage) green

Brian Minter: Vermiculture — using earthworms to aid in decomposition of organic matter — is part of the answer