One of the people involved in a pro-Palestinian car rally in support of the Free Palestine movement in Halifax said they felt betrayed after the police ticketed a number of people who attended the event.

The event happened on Saturday, the same day Halifax Regional Police also shut down a “Freedom Nova Scotia” rally on Citadel Hill, where people gathered to protest the public health measures put in place to stop the spread of COVID-19.

In anticipation of the Freedom Nova Scotia rally, the province successfully sought an injunction to prevent it from happening.

But police used that same injunction as a reason to charge people at the pro-Palestinian rally as well, to the shock of some of the people who helped organize the event.

“We were holding a peaceful rally in support of the people in Palestine: to raise awareness and to hold our leaders and politicians accountable in the way we’re complicit in what’s going on,” said Mariam Mahmoud, a member of the Atlantic Canada Palestinian Society, which organized the event called the Free Palestine COVID-safe car rally.

She said organizers took care to ensure the event would be safe by asking people to get a rapid test prior to and after participating, promoting social distancing and informing both the city and Halifax Regional Police of the rally in advance.

Mahmoud showed up to the event, which started in the Saint Mary’s University parking lot, early. Before it began, she said she observed some people outside of their cars, but they were either staying within their bubbles or distancing.

‘We were all very confused’

She said police even came up to the demonstrators and told them to ensure they remained distanced during the event, but no tickets were handed out until the rally started.

“It wasn’t until we were all in our cars because we were about to head out on the rally that the police were calling for backup, started shutting everything down, started ticketing people,” she said.

“So it honestly felt like a betrayal. We were all very confused.”

Mahmoud said one of her friends and her family was fined a total of $10,000 while they were sitting in their car. A video of the interaction shared with Global News shows an officer speaking to a masked family inside of the vehicle, with nobody else around.

She also said a maskless man was walking around the parking lot shouting “racist and insensitive” things at the demonstrators, but she didn’t observe him being fined or arrested.

In a statement on Monday, Halifax Regional Police said they issued a total of 17 summary offence tickets during the Free Palestine rally, which involved about 200 vehicles and 500 people.

Mahmoud doesn’t think the two events are comparable, since their event was billed as “COVID safe” and the other was organized with the explicit purpose of breaking public health protocols. 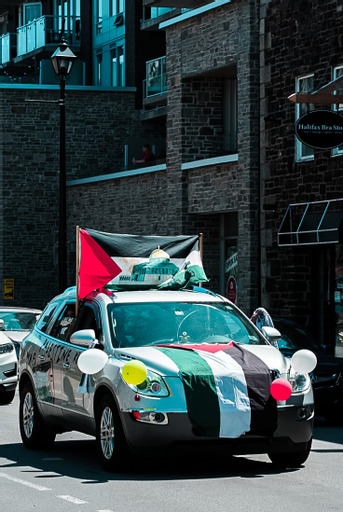 About 500 people and 200 cars showed up at a pro-Palestinian rally. Mohammed Al-Karmanji/Contributed

“It honestly just hurts that we were clumped in a category of people that are anti-mask, anti-COVID (restrictions).”

Halifax lawyer Peter Planetta, who is offering pro bono legal advice to the people at the pro-Palestinian rally, said he’s heard from “several” who are now facing big fines under the Public Health Act.

He said he’s still gathering information, but so far, he doesn’t understand why the tickets were issued.

“At this point, I’m not quite sure what violations of the health act are being alleged,” said Planetta.

“My understanding is that people were ticketed when they were sitting in their vehicles with people who were within their bubble, and so there would be no contravention of the health act in that case.”

Planetta and his partner watched the motorcade from their home on Saturday and said they didn’t see any public health violations taking place.

He agreed that the pro-Palestinian rally was different than the anti-mask rally on Citadel Hill.

“We’re talking about an injunction that was targeted at a specific rally, which its stated purpose was to engage in behaviour which risks the spread of the COVID-19 virus,” he said.

“As opposed to this one, which is a demonstration – a peaceful assembly, which they’re guaranteed the right to do under the charter – which abides by and follows the rules of social distancing and masking. There is a very clear distinction, it would appear so far for me.”

Kathryn Levandier and Peter Planetta say they had a good view of the motorcade portion of the rally and didn’t see any public health violations happening. Global News

Planetta was also concerned that some demonstrators were charged under the Motor Vehicle Act.

“What that has to do with public safety tied to the pandemic, I’m unsure,” he said.

“Some of the information that I have is that people were charged for excessively honking their horn and making noise. And in every demonstration, ever, that I’ve ever seen, there’s been drums and chanting and horns blowing, that’s part of the nature of it. I don’t see how that would ever be related to public safety or the health act.”

His partner, Kathryn Levandier, penned a letter to Premier Iain Rankin and Halifax MLA Labi Kousoulis, saying she witnessed no health violations and asking for the province to provide its position on the issue. Kousoulis responded Monday afternoon, saying: “I was not there to witness what you witnessed. It would be impossible for me to convey my position.”

“We’re all dealing with COVID together, and there needs to be a balance to ensure we maintain our rights but that we also protect the health of our neighbours and loved ones,” said Levandier.

“But I think we’re owed an explanation by police…. To me, it demonstrates potentially an abuse of their power.”

“Even people getting together in a group in a parking lot, together in cars, is technically a gathering, because as we saw, not everybody was in their cars, unfortunately,” he said. 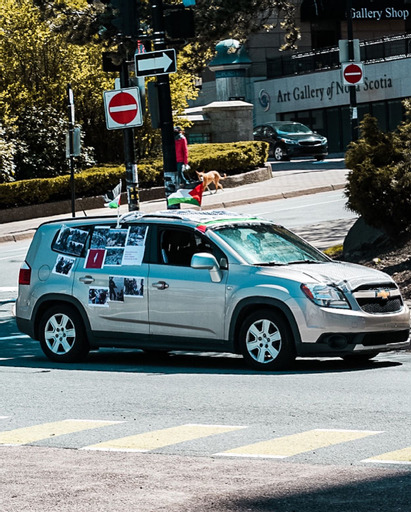 For Mahmoud, the most frustrating part of the situation is that it’s distracting from the issue they were rallying for in the first place.

However, she said the event organizers have received “great support” since Saturday and plan to fight the tickets that were issued.

Under is Interesting for Leipzig, Bayer and Eintracht. Roma estimates the winger at 15 million euros
Vladimir Petkovic: Switzerland will play in front of 30,000 Turkish fans. We will try to turn this to our advantage
Sociedad forward Isak is Interesting for Real Madrid and Man City. The transfer is estimated at 70 million euros
Bale to Italy: We understand that Wales are an outsider, but we will give our all on the field as always
Glick after 1:1 with Spain: For Poland, the Euro is just beginning
Muller-Gozensu after 4-2 with Portugal: No wonder you only ran for 60 minutes. You are playing in Italy
Spain will be in the play-offs, I'm sure. Alba about the Euro

Red Sox use bottom of order to trip up Royals

Dynamo hold on for 1-1 draw at Los Angeles FC

1 dead, another in hospital after driver crashes into Florida Pride parade

Olympics-Organisers show off Olympic village a month before Games begin

Three kids, one man wounded as tot’s birthday party shot up in Rexdale