Edmonton sports legend Joey Moss has died at the age of 57, Global News has learned.

Moss has been a beloved member of the Edmonton Oilers for decades. He became the NHL team’s locker room attendant in 1984, after he was recommended by The Great One himself — Wayne Gretzky. The two met when Gretzky was just 20 years old. He was dating Moss’ sister at the time.

Moss, who was born with Down syndrome, joined the Edmonton Football Team two years later.

Over the years, he’s captured the hearts of those in Edmonton and beyond, particularly for his enthusiastic participation in the national anthem before the start of every game. 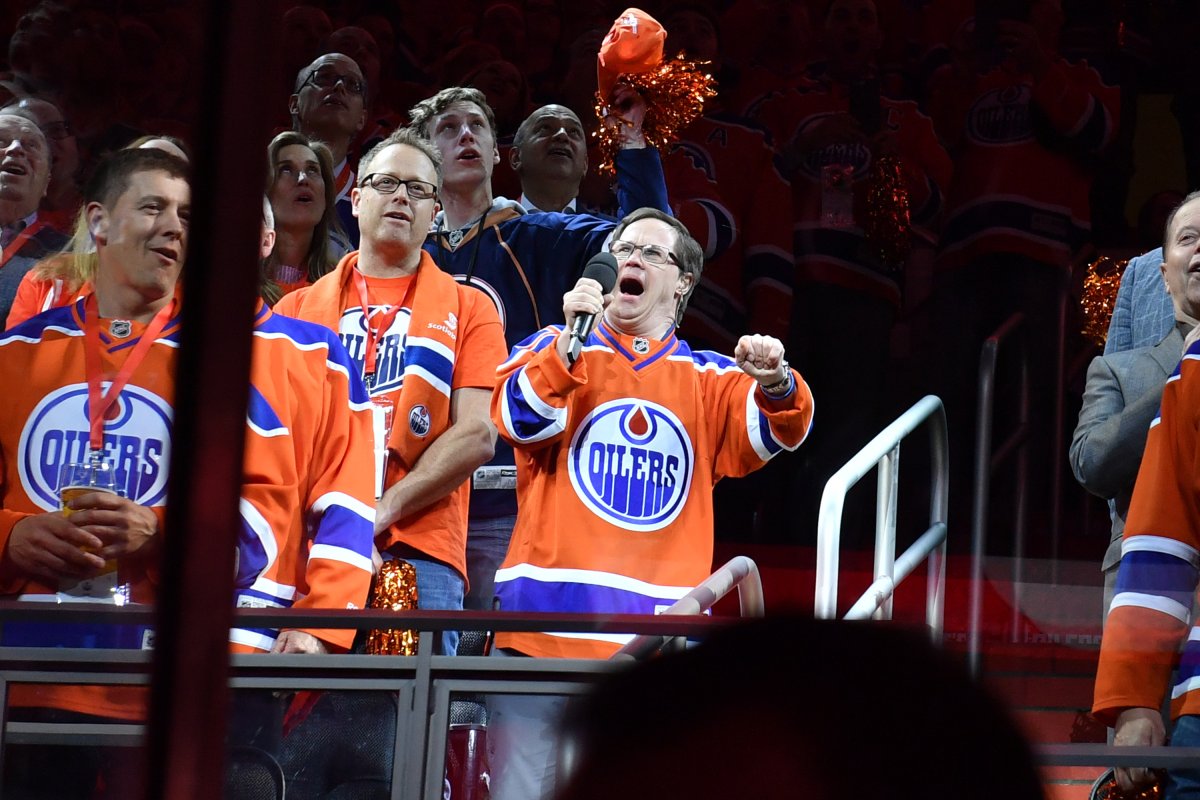 Joey Moss of the Edmonton Oilers sings the national anthem prior to Game Five of the Western Conference First Round during the 2017 NHL Stanley Cup Playoffs against the San Jose Sharks on April 20, 2017 at Rogers Place in Edmonton, Alberta, Canada. Andy Devlin/NHLI via Getty Images

Moss racked up many accolades in Edmonton over the years.

In 2003, he was presented the NHL Alumni Association’s “Seventh Man Award,” which goes to NHL members “whose behind-the-scene efforts make a difference in the lives of others.”

In 2007, he accepted the Mayor’s Award from then-mayor Stephen Mandel in recognition of the Oilers commitment to persons with disabilities.

In, 2015, he was inducted to the Alberta Sports Hall of Fame to honour his contributions and dedication made to both the Oilers and Edmonton’s CFL club. In 2012, he was recognized with a Queen Elizabeth II Diamond Jubilee Medal.

Moss is also the namesake behind “Joey’s Home”, an assisted-living home for people with developmental disabilities overseen by the Winnifred Stewart Association.

Ludicrous omission of the Champions League match: the Brugge forward did not want to transfer to the bus, and he was kicked out
Ronaldo has scored 15 consecutive seasons in the Champions League
Holland scored 15 goals in 12 matches in the Champions League in his career. He shares first place in the goalscoring race this season with Rashford
Brugge forward Dennis misses the match against Borussia due to not being able to sit in his favorite seat on the bus
Barca and Milan are Interested in 18-year-old Hoffenheim defender Bogarde. His contract expires in the summer of
Simeone on Loko match as a respite for Atletico: I have a different opinion. The game is important
Angel Correa: This year, Atletico creates chances and implements them. We didn't have any luck before
Source https://globalnews.ca/news/7423699/edmonton-sports-legend-joey-moss-dies/

Forced to change plans, Co.ERASGA focuses on the healing power of (solo) dance

The latest on the coronavirus outbreak for Nov. 24

New Music: 5 things to know about Self Help by Badge Époque Ensemble

Alberta Is Among ‘Most Pro-Mask’ Provinces In Canada, Health Minister Claims

Map gap: Where are treaty boundaries on digital maps?

'Listen to the communities that you serve:' What the delegates had to say at police board meeting

As U.S., U.K. plan to roll out vaccines in December, Canada largely silent on distribution

Lack of Canadian vaccine production means others could get inoculations first: PM

Budget-Friendly Gifts Under $20: Thoughtful Presents For Loved Ones

Fossil fuels to decline but remain big player in Canada's energy use by 2050: report

While you were sleeping: The joke's on you, because Tuesday isn't cancelled

Many Canadians Gained Weight During The COVID-19 Pandemic: Poll

I'm a sound technician. Losing my hearing was devastating