Leaders from Ethiopia and Eritrea signed a peace agreement on Sunday during a summit in Saudi Arabia, yet another sign of warming ties between two nations that have face decades of war and unease.

Saudi authorities did not respond to specific questions about the accord, which earlier had been described as being a further endorsement of a historic deal reached between the two countries in July.

"The peace deal resulted in restoration of normal relations between the countries, on the basis of the close bonds of geography, history and culture between the two nations and their peoples," Saudi Arabia said in a statement Sunday, calling the accord the "Jeddah Agreement." 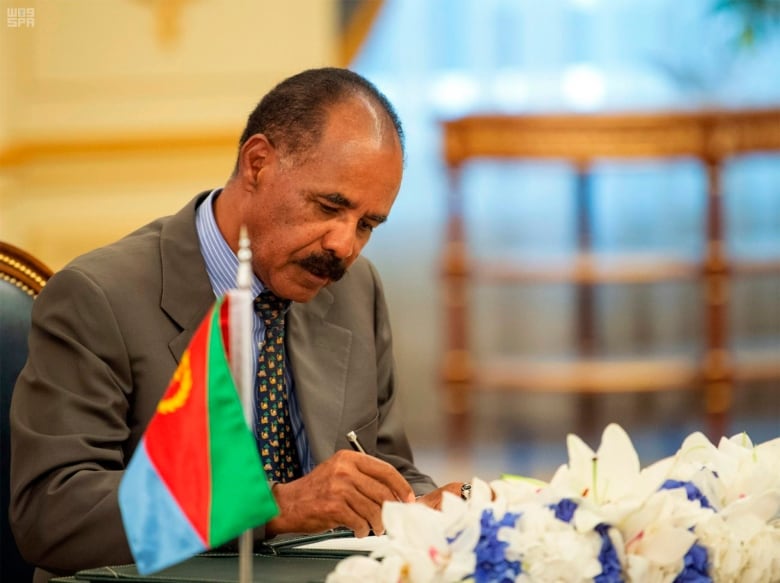 "There is a wind of hope blowing in the Horn of Africa," Guterres told journalists after the signing. "It is not only the peace between Ethiopia and Eritrea — it is the fact that tomorrow and the day after tomorrow we will have, here in Saudi Arabia, the president of Djibouti and the president of Eritrea — two countries that have also been at odds with each other."

In September, an Ethiopian-mediated effort saw relations normalize between Eritrea and Djibouti after a long border dispute. Between 2010 and 2017, Qatar had attempted to mediate a settlement but that effort failed. Qatar in June 2017 withdrew its 450 peacekeeping troops from the Eritrean-Djiboutian border after being isolated by Saudi Arabia, the UAE and two other Arab nations as part of a diplomatic dispute.

King Salman also awarded the Ethiopian and Eritrean leaders with the Order of Abdulaziz Al Saud Medal, the kingdom's highest civilian honour. They earlier won similar honours in the UAE.

Abiy and Isaias signed a five-point "Joint Declaration of Peace and Friendship" on July 9, ending 20 years of enmity and formally restoring diplomatic relations between Ethiopia and Eritrea.

Landlocked Ethiopia fought a bloody war with Eritrea from 1998 to 2000 over a border dispute that killed tens of thousands of people. The conflict ended in an uneasy peace with Eritrea, which earlier fought a decades-long war of independence from Ethiopia.

Watch: Ottawa celebrates peace in Ethiopia and Eritrea after decades of conflict

Hundreds of Ethiopians and Eritreans marched through the streets of Ottawa to celebrate what they hope is the end of a 20-year border war between their home countries.

It was particularly surprising for Eritrea, a closed-off nation of five million people ruled by Isaias since 1993. Eritrea's system of compulsory conscription has led thousands of Eritreans to flee toward Europe, Israel and elsewhere. Ethiopia is home to 105 million people.

The signing ceremony Sunday in Saudi Arabia also served as a nod to the growing importance Gulf Arab nations put on East Africa amid the Saudi-led war in Yemen. The UAE, also believed to have played a part in talks between Ethiopia and Eritrea, has been building up a military presence in the Eritrean port city of Assab.

The strategic Bab al-Mandeb Strait, which sits off Eritrea and neighbouring Djibouti, links the Red Sea and the Suez Canal with the Gulf of Aden and ultimately the Indian Ocean. Dozens of commercial ships transit the route, some 16 kilometres wide at its narrowest point, every day.

The new Bundesliga season starts on September 18
Thomas Tuchel: Atalanta is pressing and scoring a lot. PSG must play carefully
Barcelona have agreed with Lautaro, but the transfer depends on the sale of Coutinho
Mourinho about the Amazon documentary: I don't like the feeling that I'm in Big brother
Aguero will not have time to recover for the match with Real Madrid
Marcelo will miss the rest of the season in La Liga due to an adductor muscle injury
Telephone Interview, disinfection of the rails, the ban lifts. We checked-antivirus measures in the NPL really work (well, almost)
Source https://www.cbc.ca/news/world/ethiopia-eritrea-accord-saudi-arabia-1.4826101?cmp=rss

WHO reports record daily increase in global coronavirus cases, up over 228,000

Newfoundland and Labrador confirms 1st new coronavirus case since May

COVID-19 has halted the world’s cruise ships. Now, what to do with them?

How to reduce the risk of drowning in backyard pools

Wimbledon to pay players despite cancellation

WHO’s Ryan says pneumonia in Kazakhstan ‘on our radar’

Trump says he is not thinking about a ‘Phase 2’ U.S.-China trade deal

Teenage girl dies from injuries after being struck by a car in Debden, Sask.

‘The Crown’ extended for a 6th and final season

Bill Morneau has family ties to WE Charity, did not steer clear of cabinet discussion of contract

How COVID-19 ripped through the region's job market

Blues singer Lady A responds to name lawsuit: ‘I am not going to be erased’

Toronto cop accused of netting $800Gs after submitting fraudulent will

From church to mosque to museum to mosque: Hagia Sophia to open for Muslim worship, Turkey says

Ethiopia arrests suspects in the killing of popular singer

The Right Chemistry: Copper has antimicrobial properties, but beware hype

What do Conservative leadership candidates have planned for the North?

Rough road built to Old Fort in northeastern B.C. after slide ripped out only access route

Are new cannabis strains key to fighting COVID-19? These Alta. researchers think so

THE ‘GLEE’ CURSE: Naya Rivera’s body ‘may never’ be found

Conservatives say police should be called into investigate WE charity scandal