The U.S. Embassy in Eritrea said six explosions were heard Saturday night in the capital, Asmara, as the government in neighbouring Ethiopia launched a search for leaders of a rebel group in the northern region of Tigray. 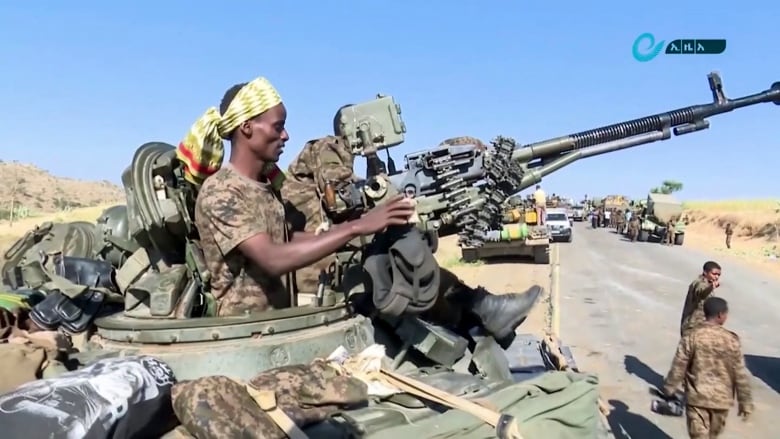 An armored personnel carrier of the Ethiopian military is driven near the border of the Tigray and Amhara regions of Ethiopia in this photo from Nov. 16. (Ethiopian News Agency/The Associated Press)

The U.S. Embassy in Eritrea said six explosions were heard Saturday night in the capital, Asmara, as the government in neighbouring Ethiopia launched a search for leaders of a rebel group in the northern region of Tigray.

The explosions came just hours after Ethiopian Prime Minister Abiy Ahmed declared victory in his government's fighting against forces of the Tigray People's Liberation Front, which runs the northern Tigray region bordering Eritrea. The army said it was in "full control" of the regional capital, Mekele, but the government said TPLF leaders remain on the run.

The TPLF leader earlier this month asserted that Eritrean forces were involved in the fighting in Tigray at the invitation of Ethiopia's government, something Addis Ababa has repeatedly denied. Fears have grown that 96,000 Eritrean refugees in camps just over the border in Ethiopia are at risk.

Tens of thousands of refugees are trapped in the midst of a standoff between the Ethiopian government and a militant group in the Tigray region as a surrender deadline passes.

The U.S. has accused the TPLF of seeking to "internationalize" the deadly conflict in which humanitarians say several hundred people have been killed, including civilians.

The U.S. Embassy statement overnight advises American citizens to exercise caution and be aware "of the ongoing conflict in the Tigray region." It also advises citizens to "monitor local news" in a country regarded by watchdogs as being highly repressive and having no independent media.The fighting has threatened to destabilize Ethiopia, which has been described as the linchpin of the strategic Horn of Africa, and its neighbours.

Food, fuel, cash and medical supplies have run desperately low. Nearly 1 million people have been displaced, including more than 40,000 who fled into Sudan. Camps home to 96,000 Eritrean refugees in northern Tigray have been in the line of fire.

Atalanta and Sevilla have agreed on the transfer of Gomez. The midfielder will fly to Spain on Tuesday
Laporta on Messi at PSG: I read that they have losses. We need to discuss what deals they can afford
PSG offered Ramos a contract for 45 million euros for 3 years (Onda Cero)
Nacho tested positive for the coronavirus. He was in contact with the patient earlier
Bale scored in the FA Cup for the first time since 2013. He has 4 goals in 13 games at Tottenham
Frank Lampard: I didn't have enough time to take Chelsea to the next level
Ozil will receive 3 million euros in Fenerbahce from July. Lifting - 550 thousand
Source https://www.cbc.ca/news/world/ethiopia-tigray-capital-military-control-1.5821112?cmp=rss

Britain to help other countries track down coronavirus variants

‘WE ARE DEEPLY HEARTBROKEN’: Toronto nurse dies by suicide

Farmers mass in Indian capital ahead of Republic Day protests

BRAUN: Ontario must do more for small businesses

Maritime women’s basketball league set to tip off in 2022

MP Booted From Caucus Over ‘Dangerous Accusations’ Against Fellow Liberals

Trailer suggests Godzilla vs. Kong is all punchline and no punch

What the Puck: Canadiens centre Phillip Danault overpricing himself

No. 14 Wisconsin looks to bounce back at Maryland