It isn’t something anybody had ever thought was possible: a predominantly Black cast and crew filming a drama series in Calgary.

Sylvester Ndumbi runs Simba Creative. He is the producer of a unique TV series called The African Family that follows a “young African-Canadian woman, who recently sponsored her husband from Angola, discovers the truth about their marriage.”

“We’ve always believed there’s a lot of talent in Calgary,” Ndumbi said. “I haven’t come across anything as close to what we’re doing in Canada.”

The production is mobilizing a diverse cast and crew showcasing Black talents.

“Our industry was destroyed during the pandemic so we thought let’s do something to keep busy, but the first time we saw the cast together and watched how the crew responded, we thought we can’t do this half — we have to go all the way,” Ndumbi said.

Director Bukky Abaniwonda said she’s privileged to work with this calibre of talent in Calgary.

“Canada is my home, and I want to make something here. I don’t want to go back to Nigeria because there’s no opportunity,” Abaniwonda said. 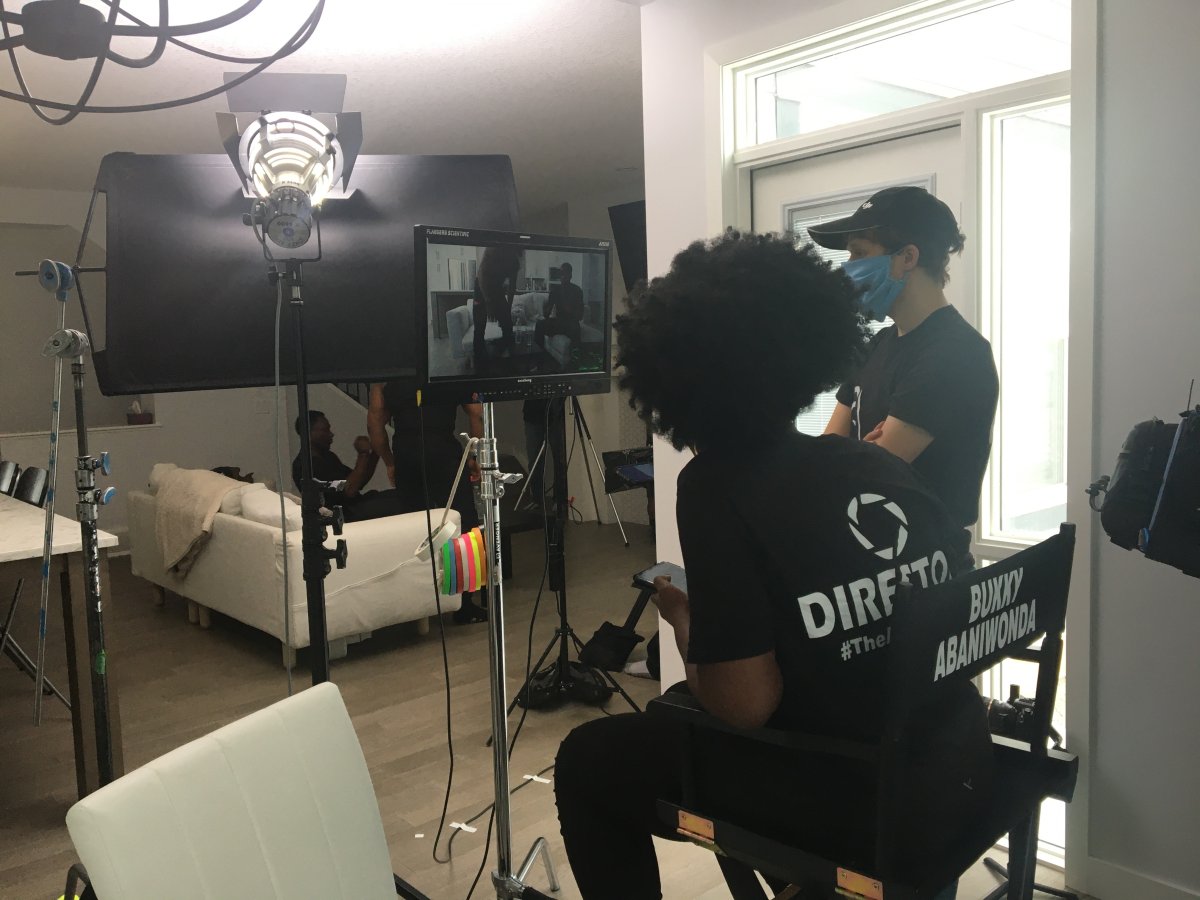 On location at a home in Legacy. Jill Croteau/Global Calgary

Ndumbi and Abaniwonda together have invested $200,000 into the economy with this series, employing 50 people, supporting local businesses and getting catering from local restaurants to help offset COVID-19 struggles.

“We partnered with so many small businesses and generated economic activity to provide us lunch and dinner and for many restaurants that haven’t seen that kind of traffic and activity at once. It means a lot to them,” Ndumbi said.

“Being able to partner with someone else with the same mindset who wants to see growth and amplify Black voices, that’s an opportunity,” Abaniwonda said.

The actors involved said they don’t take it for granted.

Nikita Kalonji is the lead actor and wants the film highlighted as any other movie.

“I know the narrative in film and media, and they will default to a Black film. That’s the vocabulary. It’s Black actors and not just actors and maybe we can try and change the dialogue,” Kalonji said.

“I get the opportunity to represent the Black community and my family and myself.”

Obaro J. Erome-Utunedi is also in a lead role and is grateful for this opportunity.

“Usually, Black roles I find are limited or typecasting, and to me, I wanted more and something like this I never envisioned it was possible,” Erome-Utunedi said.

“It’s nice to be a part of — I don’t want to say revolutionary but I’m hoping it’s something the public will take to.” 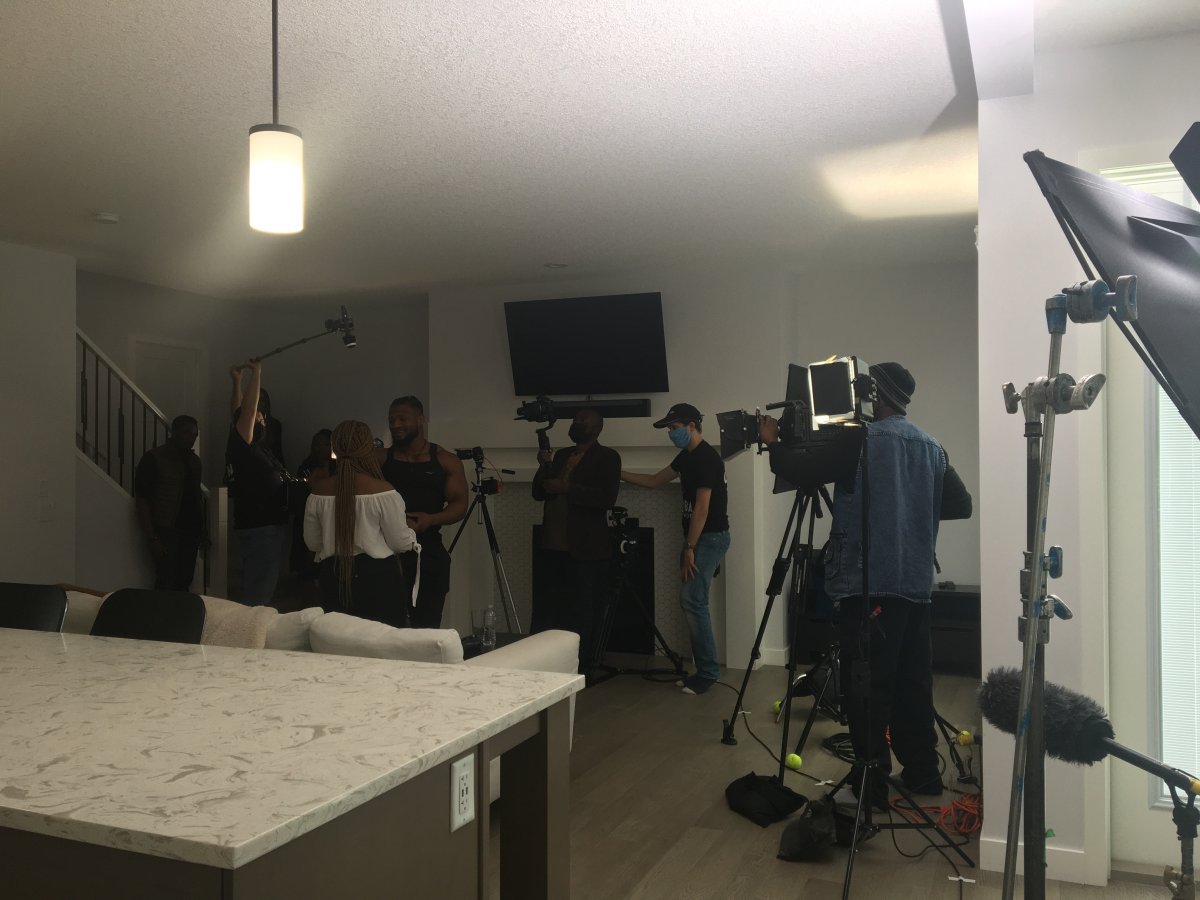 Cast and crew on the set of “The African Family.”. Jill Croteau/Global Calgary

The production team plans to make a network pitch for the six-episode series sometime in 2021 in hopes of debuting on screen in September.

“I can’t wait to show Calgary and Canada what we have,” Ndumbi said.

Steve McManaman: Real Madrid are an aging team. They need new players if they want to reach their previous heights
ISCO could move to Sevilla in January. Lopetegui is personally Interested
Bilyaletdinov about the Champions League: Loco can leave the group. Unmotivated Bayern can be beaten in the 6th round
Zlatan Ibrahimovic: I Thought about retiring, but I wanted to change the mentality of Milan
Vasco da Gama sports Director: Balotelli will be like Maradona for us
Real Madrid won't buy Mbappe in the summer of 2021 due to the crisis (Le Parisien)
Ibra scores in 39, Buffon drags in 42, Ronaldo has no plans to finish. Is football really getting old?
Source https://globalnews.ca/news/7423313/african-canadian-film-production-calgary/

Alberta’s new, tougher impaired driving laws are in effect — here’s what you need to know

Trump lawyer: Former cybersecurity head Krebs should be ‘taken out at dawn and shot’ for disputing election fraud

William Watson on fiscal misguidance: All the green subways in the world won’t get pilots flying again

Opinion: How to play the COVID-19 endgame

Scotiabank CEO 'cautiously optimistic' about economic outlook despite profit drop to $1.9B

Day unavailable to coach if Buckeyes play this weekend

The size of a matchbox, a rare mouse deer is born on camera in Poland

Fiscal update 2020: Everything you need to know, from childcare to home offices — and trees

'Like I was losing my mind': Student with rare 'brain on fire' overcomes coma, memory loss to graduate university

Macron: France will not accept Brexit deal if not in long term interests

COVID-19 update for Dec. 1: Here's the latest on coronavirus in B.C.

Two killed by car in pedestrian zone in German town

Once healed, some patients still feel incapable of returning to work: physiotherapists

While you were sleeping: Despite our best efforts, Tuesday is a go

Thin ice around Winnipeg prompts 17 calls to 911 over weekend

Another metal monolith appears in Romania, then vanishes

One person dead, another gravely injured in two pedestrian collisions in London

From hate speech to nudity, Facebook’s oversight board picks its first cases

Should you shave your beard amid coronavirus? Experts weigh in on mask debate

Your Saskatchewan photo of the day: December 2020

Christmas music and COVID-19: How to adapt when group singing isn’t safe

Gift Guide 2020: For the doomscroller

She cancelled her home insurance because of coronavirus shutdowns. Then her home caught fire