The group home employee who reported Traevon Chalifoux-Desjarlais missing testified that he searched the teen's bedroom but couldn't recall if he ever looked in the closet where his body was eventually found.

"Obviously I did not check well enough because I didn't find him," said Murray McMaster, speaking at the Coroner's Inquest into the death of the Cree teen.

Traevon's body was found hanging in the closet on Sept. 18, 2020, four days after McMaster reported the 17-year-old missing to the Ministry of Children and Family Development's after-hours reporting line, and three days after McMaster filed a missing persons report with Abbotsford police.

McMaster testified that when he came on shift at around 8 a.m. on Sept. 14, he didn't see Traevon and assumed he was still in bed. Brett Claxton, the worker McMaster took over from, testified Traevon had made a grilled cheese sandwich at 10:30 p.m. the night before.

McMaster said when he went to get Traevon up at around noon on Sept 14, he observed Traevon wasn't in his bed. At 10 p.m. that night, after not being able to locate Traevon, McMaster left a message on the MCFD reporting line. The following day at 2 p.m., he filed a missing person's report with Abbotsford police. 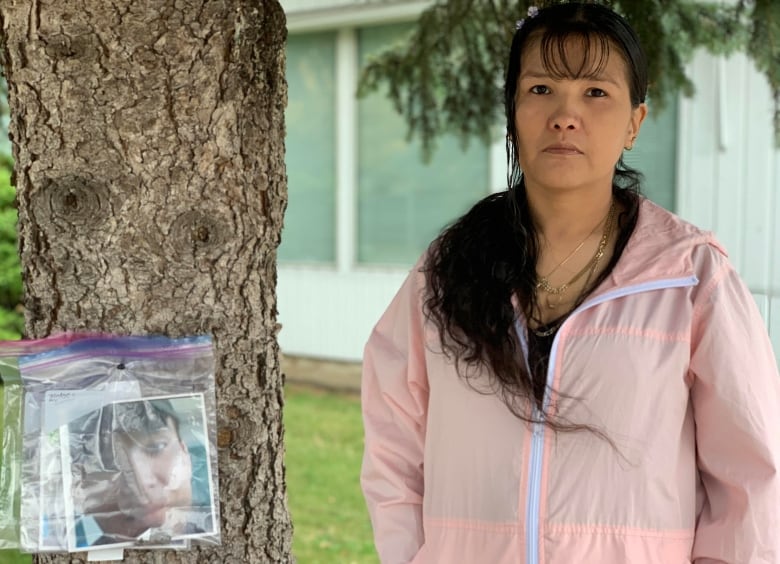 Samantha Chalifoux stands in front of a small memorial in front of the group home, where her son Traevon Chalifoux Desjarlais died.  (Angela Sterritt/CBC)

McMaster testified he checked Traevon's bedroom on Sept. 15 and Sept. 16, but didn't find anything. He said he also sent fellow group home worker, Geoff Holley, to check the room.

On Sept. 17, McMaster said he started noticing a smell and wondered if there was a dead animal in the holes Traevon had made in his bedroom walls.

"That's when I started searching other areas of the house, the boiler room ... under the stairs," he said.

The court heard that McMaster requested a dump run on the morning of Sept. 18 to dispose of items that might be causing the smell.

That same morning, two Abbotsford Police officers came to the group home without being called there. McMaster informed the officers of the smell and they went to the bedroom and immediately found Traevon's body in the closet.

McMaster was asked why he declined to say Traevon was a suicide risk when he called in the missing person report. He responded that previous attempts to have Traevon apprehended under the mental health act had failed.

"When I called APD when he did ideate suicide, they did not apprehend him so [I felt] it was not legitimate," he said.

The court heard about an incident on Aug. 28, 2020, when Chalifoux-Desjarlais mentioned he might cut his wrists after he had destroyed his mattress and sheets with something sharp.

McMaster said said he called police hoping they would take Traevon in under the Mental Health Act but was told there wasn't cause to apprehend.

According to evidence given by Abbotsford Police Const. Daniel Beebe, McMaster reported to police that Traevon had last been seen at 1 p.m. on Sept. 14, contradicting what McMaster earlier told the court about not seeing Traevon at all that day.

Beebe told the inquest police usually didn't search for missing 17-year-olds in their own homes "because they're usually not there."

Traevon's group home was run by Rees Family Services, a company contracted by Indigenous child welfare provider Xyolhemeylh. Xyolhemeylh is a delegated agency of the Ministry of Children and Family Development operating in the Fraser Valley.

The inquest is slated to hear evidence into next week.

Coroner's Inquests do not find blame, rather, they are meant to serve the public interest in determining the cause and circumstances of a death. The jury hearing the evidence can make recommendations aimed at preventing similar deaths in the future.

If you or someone you know is struggling, here's where to get help:

If you're worried someone you know may be at risk of suicide, you should talk to them about it, says the Canadian Association for Suicide Prevention. Here are some warning signs:

Turning empty offices into housing is a popular idea. Experts say it's easier said than done

Grammys Moments: A rap tribute for the ages, Beyonce triumph

Grammys 2023: Beyoncé makes history, while being shut out of major awards

After worst loss of season, Kings eye redemption vs. Rockets

China accuses US of indiscriminate use of force over balloon

Pebble Beach Pro-Am to finish Monday; Justin Rose up by 2

At least 24 dead in Chile as wildfires spread, driving many to flee for safety

No. 3 Houston takes down Temple to avenge previous upset

Chinese spy balloon: U.S. military in search of remnants after shoot down

Michigan’s Hunter Dickinson too much for Ohio State

Beyoncé wins the most Grammy Awards of all time

Removal of historic trees at Osgoode Hall delayed by injunction

Joe Exotic leaves everything to fiance Seth Posey in new will

Grammys 2023: The brightest, boldest and best looks from the red carpet

Around 2,550 Hydro-Québec customers without power as cold snap abates

About 2,550 Hydro-Québec customers without power as cold snap abates

‘It was a great time’: Edmonton Oilers goalie Stuart Skinner on All-Star experience