TORONTO -- Researchers at the University of Turku in Finland have mapped the human brain’s response to horror movies to better understand how scary movies and the accompanying fear manipulate brain activity.

The study entitled “Dissociable neural systems for unconditioned and sustained fear,” was published in the January issue of the NeuroImage journal. It explains how researchers used magnetic resonance imagery (MRI) technology to study the brain while test subjects watched a feature-length horror movie.

First, researchers delved into the world of horror cinema and created a comprehensive movie study to determine the top 100 horror movies from the past 100 years, using IMDB ratings and the opinions of 216 film enthusiasts. The list included such titles as “The Devil’s Backbone” from 2001, “A Chinese Ghost Story” from 1987 and “The Exorcist” from 1973. Eventually, researchers chose two films, “Insidious” and “The Conjuring 2” to use in the study.

Study participants watched the two films using special goggles while inside an MRI machine, and were asked to rate their fear and catalogue the jump scares in the films.

“People found horror that was psychological in nature and based on real events the scariest, and were far more scared by things that were unseen or implied than what they could actually see,” according to a University of Turku press release.

Researchers separated the fear experienced while watching a horror movie into two categories. The first was “preparatory sustained awareness,” which is the impending feeling of dread. The second was the “acute fight-or-flight responses,” which is more commonly known in this context as jump scares.

Data collected by the MRI scans found that, while the subjects were watching horror movies and experiencing the “preparatory sustained awareness” type of fear, the regions of the brain involved in visual and auditory perception became more active. This is because the brain felt the need to pay attention “for cues of threat in the environment.” 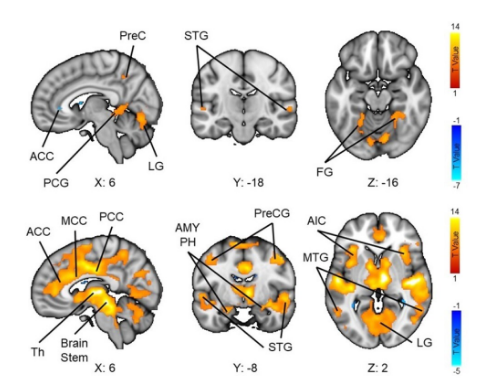 Brain regions active during periods of impending dread (top row) and in response to sudden jump-scares (bottom). (University of Turku)

Researchers determined that because the brain regions experiencing enhanced activity during horror movies were also continuously interacting with sensory regions that “our brains are continuously anticipating and preparing us for action in response to threat and horror movies exploit this expertly to enhance our excitement,” researcher Matthew Hudson said in a release.

Turkey to arrest 228 for links to cleric in probe of military, ministry – Anadolu

Here's who's coming to Bluesfest!

Smokers with HIV have higher incidents of lung disease: study

No. 1 Baylor eyes history in rematch with Oklahoma

Gyms in China livestream routines as coronavirus keeps patrons away

Dotson (29 points) leads No. 3 Kansas to rout of Iowa State

Cornwall gets some answers on plans for quarantine at Nav Centre

At least 32 Canadians test positive for COVID-19 on board quarantined ship: government

No. 5 Dayton full of confidence before facing VCU

Tennis-Plenty of positives for Clijsters despite Dubai comeback defeat

Bolton says he hopes book is not ‘suppressed’ by White House

Is COVID-19 spreading because we didn't heed the lessons of previous viral outbreaks?