High-level meetings have wrapped up in Washington on the ongoing influx of illegal border-crossers coming to Canada from the U.S. 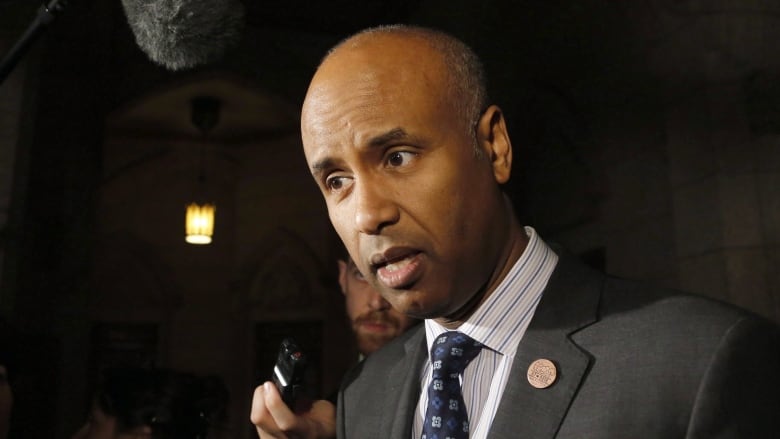 Minister of Immigration, Refugees and Citizenship Ahmed Hussen speaks to reporters outside the House of Commons on Parliament Hill on Thursday, May 31, 2018. (Patrick Doyle/THE CANADIAN PRESS)

High-level meetings have wrapped up in Washington on the ongoing influx of illegal border-crossers coming to Canada from the U.S.

A statement said the two leaders discussed how to work together on immigration and border security issues, including visa and screening policies, as well as stopping the misuse of U.S. visas for illegally entering Canada.

Most of the asylum seekers arriving in Canada this year have been from Nigeria, carrying U.S. travel visas obtained with the express purpose of claiming refugee status in Canada.

Nielsen said those would-be refugees likely will find their U.S. visas revoked and their ability to travel impeded as a result.

Hussen said there are no formal negotiations on the so-called Safe Third Country agreement, but that discussions on the agreement and collaboration with the U.S. on improving border management will continue.

Van der Vaart on Maguire: he tells his wife every day: I screwed up, but I still get paid a lot
Agent de Bruyne: Kevin is not thinking about leaving Manchester City. 90% of news is nonsense
Ronaldo is the king of alcohol. I was out with Vieri, begging for beer from the media, and I figured out how to drink in front of the coach
MLS is back: almost 9 minutes of protest against racism and a giant virtual adidas logo in the center of the field
Solskjaer on MATIC: I'm Glad he stayed. We need experience in a team with children who run around
Germany manager Bierhoff: Havertz is a player for Real Madrid
Buffon's agent: Gianluigi should become a coach. He can lead Juve
Source http://www.cbc.ca/news/politics/hussen-washington-asylum-nielsen-1.4691541?cmp=rss

China should meet with U.S. on arms control – State Department

Kelly McParland: Bob Rae will fit right in at the UN

COVID-19 update for July 9: Here's the latest on coronavirus in B.C.

Some in New Mexico want statue back up

Motor racing-Alonso needs no help from me, says Ricciardo

Soccer-Dutch league to allow some fans to return in September

With more than 1.5 million consultations, telemedicine’s on the rise during COVID-19

U.S. has not yet decided how it will retaliate to France digital tax -Mnuchin

Missing Seoul mayor left message ‘like a will’ – Yonhap

Calgary’s Spark science centre reopens to the public on Saturday

Coronavirus live updates: Masks will be mandatory inside July 20

COMMENTARY: Does the federal budget snapshot point to Trudeau calling an election?

U.S. to bar contracts from companies that use Huawei, other Chinese companies

Wooden statue of Melania Trump burned in her native Slovenia

B.C. hockey team to change name out of respect for First Nations

In Montreal, it's the early bird that gets the comet

Canadian teachers preparing for next school year: We want to hear from you

How to safely visit the dentist during the pandemic

Who’s WHO? The World Health Organization under scrutiny