Hurricane Ian left a path of destruction in southwest Florida, trapping people in flooded homes, damaging the roof of a hospital intensive care unit and knocking out power to two million people before aiming for the Atlantic Coast.

The National Hurricane Center said Ian became a tropical storm over land early Thursday and was expected to emerge over Atlantic waters near the Kennedy Space Center later in the day. Flooding rains continued across the state, and a stretch of the Gulf Coast remained inundated by ocean water pushed ashore by the massive storm.

"Severe and life-threatening storm surge inundation of eight to 10 feet [2.5 to 3 metres] above ground level, along with destructive waves, is ongoing along the southwest Florida coastline from Englewood to Bonita Beach, including Charlotte Harbor," the centre said.

At 5 a.m. ET Thursday, the storm was about 70 kilometres southeast of Orlando and 55 kilometres southwest of Cape Canaveral, where NASA earlier this week rolled back its moon rocket ahead of the storm. Social media posts from reporters showed significant flooding on the streets of Kissimmee, a popular tourist stop for taking day trips to the Orlando-area theme parks.

Ian was carrying maximum sustained winds of 100 kilometres per hour and moving toward the cape at 13 km/h, the Miami-based hurricane centre said.

Tropical-storm-force winds extended outward up to 665 km from the centre, and nearly the entire state was getting drenched, with up to 30 centimetres of rain forecast for parts of northeast Florida, coastal Georgia and the Lowcountry of South Carolina. As much as 15 centimetres could fall in southern Virginia as the storm moves inland over the Carolinas, and the centre said landslides were possible in the southern Appalachian mountains.

Ian turned streets into rivers and blew down trees as it slammed into southwest Florida with 241 km/h winds, tied for the fifth-strongest hurricane, when measured by wind speed, to ever strike the U.S.

No deaths were reported in the United States from Ian by late Wednesday, but a boat carrying Cuban migrants sank Wednesday in stormy weather east of Key West.

Air crews continued to search for possibly 20 remaining migrants, but a spokesperson for the coast guard said "the chances of them still being alive are not good," per the South Florida Sun-Sentinel.

The storm previously tore into Cuba, killing two people and bringing down the country's electrical grid.

More than 2 million Florida homes and businesses were left without electricity, according to the PowerOutage.us site. Nearly every home and business in three counties was without power. 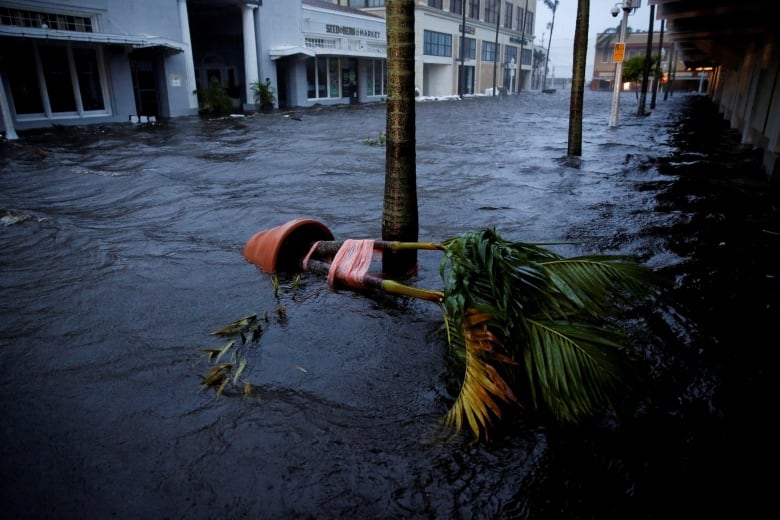 A flooded street is seen in Fort Myers as Hurricane Ian made landfall in southwestern Florida, on Wednesday. The hurricane knocked out power to two million people. (Marco Bello/Reuters)

Walt Disney said its Orlando theme parks will be closed again on Thursday.

In Port Charlotte, along Florida's Gulf Coast, the storm surge flooded a lower-level emergency room in a hospital even as fierce winds ripped away part of the roof from its intensive care unit, according to a doctor who works there.

Water gushed down onto the ICU, forcing staff to evacuate the hospital's sickest patients — some of whom were on ventilators — to other floors, said Dr. Birgit Bodine of HCA Florida Fawcett Hospital. Staff members used towels and plastic bins to try to mop up the sodden mess. 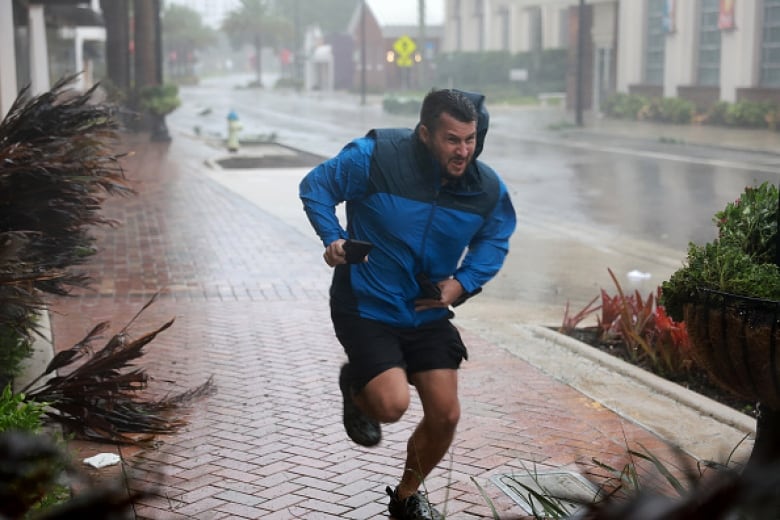 Brent Shaynore runs to a sheltered spot through the wind and rain from Hurricane Ian on Wednesday in Sarasota. (Getty Images)

The medium-sized hospital spans four floors, but patients were forced into just two because of the damage. Bodine planned to spend the night there in case people injured from the storm arrive needing help.

"As long as our patients do OK and nobody ends up dying or having a bad outcome, that's what matters," Bodine said.

Brittany Hailer, a journalist in Pittsburgh, contacted rescuers about her mother in North Fort Myers, whose home was swamped by 1.5 metres of water.

"We don't know when the water's going to go down. We don't know how they're going to leave, their cars are totalled," Hailer said. "Her only way out is on a boat."

Tampa Bay, the city, had been bracing for the possibility of a direct hit from a hurricane for the first time since 1921. But the storm made landfall well to the south, near Cayo Costa, a barrier island just west of heavily populated Fort Myers.

"The way that the storm ended up moving through … Tampa Bay really was spared of the worst of that damage," said Nicole Valdes of Fox Weather.

The storm has been predicted to veer back ashore in South Carolina on Friday.

The governors of that state, North Carolina, Georgia and Virginia all pre-emptively declared states of emergency. Forecasters predicted Ian will turn toward those states as a tropical storm, likely dumping more flooding rains into the weekend.

No. 13 Tennessee’s defense shuts down McNeese

Alberta couple square off against payment system Square after losing out on $3,300 in sales

Miami hangs on to beat Rutgers

Soccer-A generation that won’t be forgotten by the Saudis

Seahawks look to get well vs. beat-up Rams

‘This is a crisis’: City council approves $7.5M for emergency winter shelter space in west Edmonton

After letting victory slip away, Falcons hungry to play Steelers

Close to 45,000 Hydro-Québec clients without power amid high winds

Grandparent scams are on the rise. Here's how you can protect yourself

Metro Vancouver snowstorm: Map apps great tools, but fall down in the snow

Gerardo ‘Tata’ Martino out as Mexico’s coach after WC exit

‘We have not seen a mass exodus of nurses,’ Ontario health minister says

Close to 50,000 Hydro-Québec clients without power amid high winds

Message from 1921 found underneath former statue at Manitoba legislature

MANDEL: She complained her husband tried to choke her. Four months later, she was found strangled

Roche shutters most trials of Alzheimer’s drug after failed trials