India reported another record surge of COVID-19 infections on Monday, adding 28,701 new cases over the previous 24 hours. Authorities in several cities are reinstating strict lockdowns after attempting to loosen things up to revive an ailing economy.

The new cases raised the national total to 878,254. The Health Ministry also reported another 500 deaths in the past 24 hours, taking total fatalities up to 23,174.

New Delhi, Mumbai, Chennai, Bangalore and Pune are among the key Indian cities witnessing a surge in infections. Several states introduced weekend curfews and announced strict lockdowns in high-risk areas to slow down infections, including parts of the India-administered region of disputed Kashmir.

India is third in total coronavirus caseload, behind only the United States and Brazil. On Sunday, Florida hit a grim milestone, shattering the U.S. national record for a state's largest single-day increase in positive cases.

Deaths from the virus have been rising in the U.S., especially in the south and west, though still well below the heights hit in April, according to a recent Associated Press analysis of data from Johns Hopkins University.

"I really do think we could control this, and it's the human element that is so critical. It should be an effort of our country. We should be pulling together when we're in a crisis, and we're definitely not doing it," said University of Florida epidemiologist Dr. Cindy Prins.

Adm. Brett Giroir, a member of the White House coronavirus task force, called mask-wearing in public, which has been met with resistance in some U.S. states, "absolutely essential." Giroir, the assistant secretary at the Health and Human Services Department, told ABC's This Week on Sunday that "if we don't have that, we will not get control of the virus."

What's happening with coronavirus in Canada

As of 6:30 a.m. ET on Monday, Canada had 107,590 confirmed and presumptive coronavirus cases. Provinces and territories listed 71,467 of those as recovered or resolved. A CBC News tally of deaths based on provincial reports, regional health information and CBC's reporting stood at 8,819.

In Quebec, there were 114 new cases confirmed on Sunday, for a provincial total of 56,521.

Here's what's happening around the world

Australia's worst-hit Victoria state recorded only 177 new coronavirus cases on Monday, but a health official is warning the disease's spread might yet worsen. The new cases were substantially down from 273 cases on Sunday and a record 288 on Friday.

Victoria's Chief Health Officer Brett Sutton said it was too early to say whether the lower count meant the spread was being contained. "It's great it's lower than our peak. But it may not be our peak yet," Sutton said. "So I would like to see a week of decreasing numbers before I come and say I have greater confidence about the direction we're going in."

Melbourne, Australia's second-most popular city, and a part of its surrounds in Victoria returned to lockdown last week in a bid to contain the disease spread. Australia has recorded around 10,000 COVID-19 cases and 108 deaths. 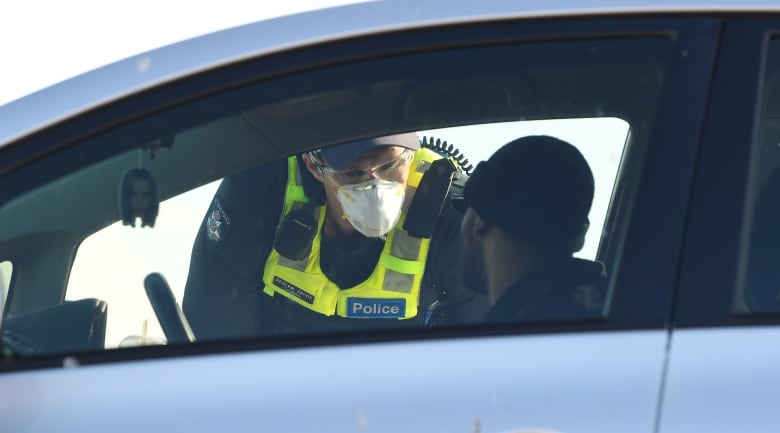 A Victoria state police officer works at a vehicle checkpoint along the Princes Freeway outside of Melbourne on Monday after the city went into lockdown. (James Ross/AAP/Reuters)

Organizers cancelled Hong Kong's annual book fair two days before it was due to start, as COVID-19 infections rise in the territory. The book fair, which draws hundreds of thousands of visitors each year and is organized by the Hong Kong Trade Development Council, will be rescheduled together with three other public fairs.

Hong Kong has seen a spike in the number of locally transmitted cases, prompting a suspension of all schools and tightened physical-distancing measures. The city reported 30 new local infections on Sunday. So far, Hong Kong has reported 1,470 infections and seven deaths.

Some public health and infectious disease experts are pressing for governments in Canada to shift to minimizing, not eradicating, COVID-19 while allowing society to resume functioning.

In Germany, Health Minister Jens Spahn criticized his countrymen for failing to respect physical distancing rules on vacation after videos emerged over the weekend showing German tourists partying on the Spanish island of Mallorca.

Spahn told reporters on Monday that he understood vacationers were "impatient" after months of lockdown, but that the scenes captured on video Friday made him "very worried" because such behaviour would increase the risk of coronavirus infection for the partying tourists and others.

Spahn also urged Germans not to stage private parties for Oktoberfest, after the official event was cancelled this year due to the pandemic. While Germany has managed to flatten the curve of infections, with just under 200,000 confirmed cases and 9,071 deaths to date, Spahn said it was important to remain alert to prevent a second wave in the fall.

In Spain, a judge overturned a decision by the Catalan regional government to confine over 140,000 people to only leaving their homes for work and other essential activities, arguing that only central authorities can issue a lockdown that restricts freedom of movement. 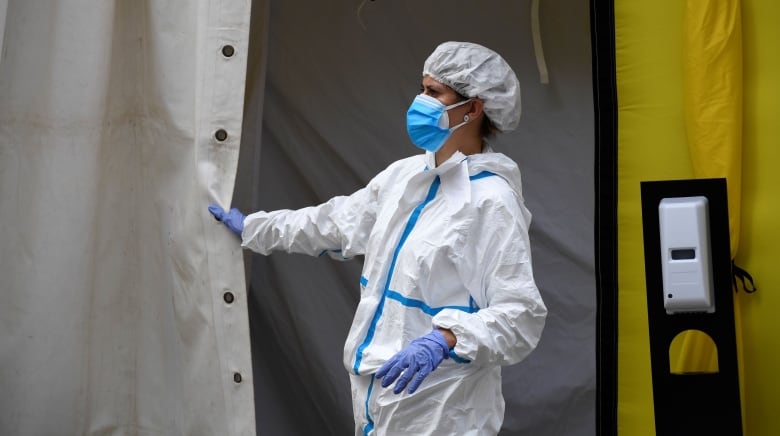 Authorities in northeastern Catalonia had announced the stay-at-home order on Sunday, a week after they had already limited travel to and from El Segria county because of an outbreak of the virus that causes COVID-19. But a judge in Lleida, the largest municipality in the county, ruled overnight that because the measure is "indiscriminate" and "disproportionate," it has to be applied under a state of emergency, which can only be enacted by the nation's government.

Regional Vice-President Pere Aragones has said that the Catalan government plans to appeal the judge's decision. The outbreak in the rural area is connected to farm work and seasonal day workers, many of whom work and live in precarious conditions.

Spain's 17 regional governments are now largely in charge of handling the response to the pandemic after a three-month nationwide lockdown ended in mid-June. The virus has claimed at least 28,000 lives in the country, according to official records.

Officials in Mexico said on Sunday that the number of confirmed COVID-19 deaths has passed 35,000, making it the country with the fourth highest total.

A count by Johns Hopkins University has only the United States, Brazil and Britain with more confirmed deaths from the novel coronavirus. Sunday's rise to 35,006 confirmed deaths moved Mexico, a country with 130 million inhabitants, past Italy.

President Andres Manuel Lopez Obrador insisted the development of the pandemic in Mexico "is positive, it is good" because only nine of the country's 32 states had increases in infections.

"The bottom line is that the pandemic is on the downside, that it is losing intensity," he said.

Nevertheless, some days this past week have seen record daily numbers of new infections.

Deputy Health Secretary Hugo Lopez-Gatell said the number of confirmed cases of the coronavirus rose to 299,750 on Sunday.

South African President Cyril Ramaphosa says the country will immediately return to a ban on the sale of alcohol to reduce the volume of trauma patients so that hospitals have more beds to treat COVID-19 patients.

Confronted by surging hospitalizations due to the coronavirus, South Africa is also reinstating a night curfew to reduce traffic accidents, and made it mandatory for all residents to wear face masks when in public.

Fomin about career abroad: I don't plan so: in 20 — FNL, in 22 — RPL, in 24 — Europe. I move step by step
Mendes suggested Manchester United's Fati as an alternative to Sancho. Barcelona will not sell the midfielder and will extend his contract
Sevilla goalkeeper bunu about the 11-meter shot: he Coached a penalty with Ocampos. He is hitting the same way as Jimenez
Coach Porto conceição can change Conte at the head of Inter
Hans-Dieter flick: I Think Tiago should play in the Premier League. He wants a new challenge
Coutinho can play against Barca. The contract does not specify a ban on his participation in the match
The real life thinking about to return to Zeballos. The decision is up to Zidane
Source https://www.cbc.ca/news/world/coronavirus-july-13-covid-19-1.5647169?cmp=rss

Sixers to meet Raptors with focus on resting stars

Hays homers in 10th to lift Orioles past Phillies

Timbers top Orlando City in MLB is Back final

Man in critical condition after motorcycle crash near Radium, B.C.

Top tips for watching the Perseid meteor shower, which peaks Aug. 11 and 12

Spotlight will shine on goalies in Canadiens-Flyers playoff series

Escape 2020 by stepping back into the '90s, with an Airbnb stay at the last Blockbuster

Rays shut down LHP McKay due to shoulder tightness

Coronavirus: Lethbridge university and college prepare for students in residences

Aces pull away as Fever fade