The health area recorded the most illicit drug deaths in a single month the region has ever seen.

Thirty-one people died, the equivalent of one person each day.

That statistic was released in a report from the B.C. Coroners Service on Wednesday.

The Coroners Service numbers show that drug deaths are once again on the rise in the Okanagan and advocates and health officials believe the pandemic is to blame.

As of the end of October, 102 people in the Okanagan had been killed by illicit drugs in 2020. 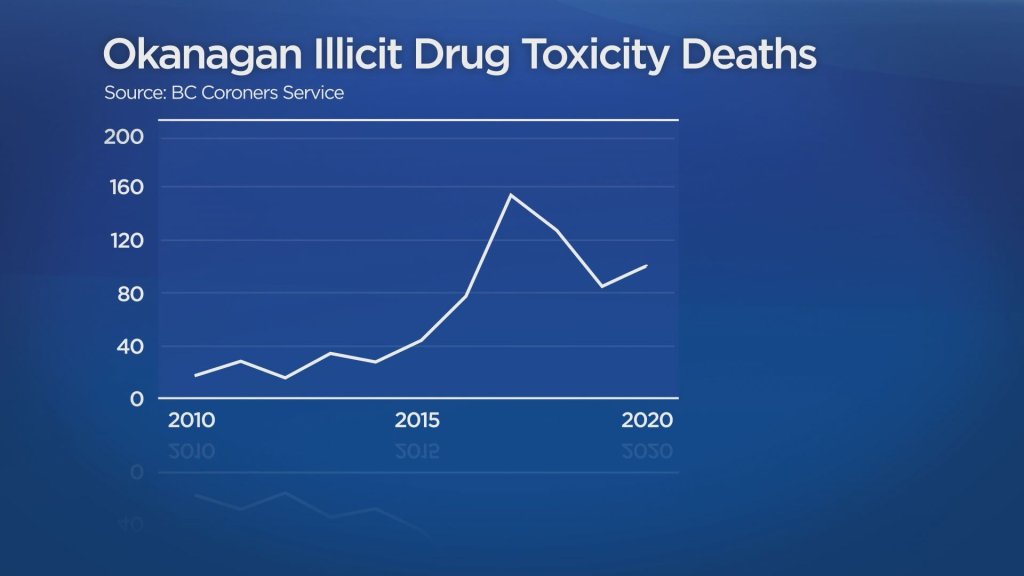 “We thought we were making some headway with the numbers and actually were not.”

The increase in deaths is being blamed on the pandemic which is leaving people isolated, making it harder to access services, and impacting the drug supply itself.

“We are seeing a change in the toxicity of the drug supply. We are seeing higher concentrations of fentanyl (and) mixtures of drugs that are much more dangerous,” Interior Health medical health officer Dr. Karin Goodison said.

Alison Houweling, who works for an Okanagan charity that offers addiction recovery programs, believes we are seeing a lot more domestic creation of drugs because of pandemic border restrictions.

“The people who are mixing the dope and selling it are behaving like chemists but they are not really chemists,” Houweling, the manager of community services and education for Turning Points Collaborative Society said.

“Nobody wants to see their customer base die but they are not cutting in the dope in ways that are keeping people alive.” 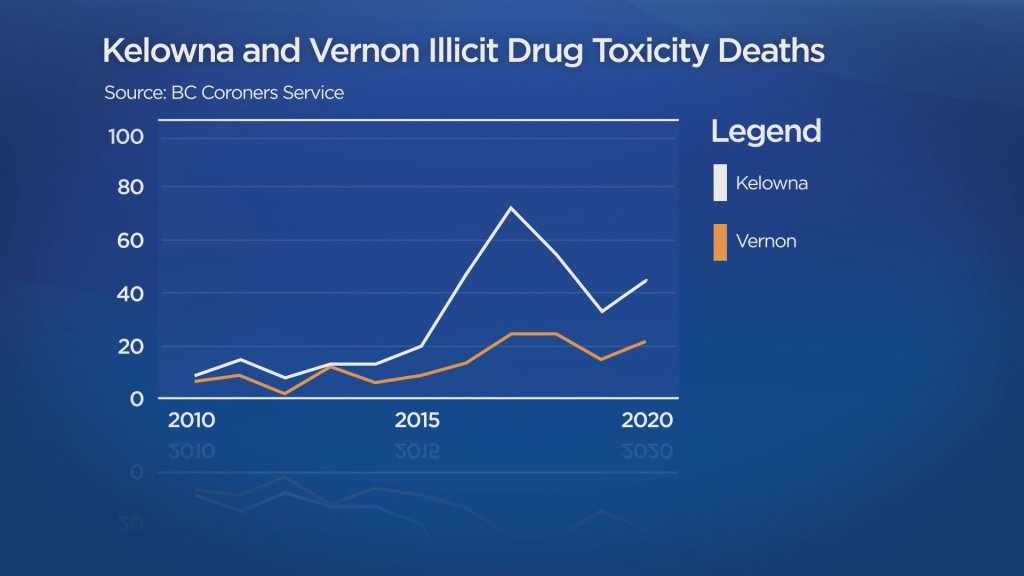 “We really encourage people to get your drugs checked so you can find out what’s in your drugs and make a decision about the safe way to use or dispose of it if it is not what you were expecting,” Dr. Goodison said.

Interior Health is looking at expanding access to what’s called “safe supply,” prescription medication that can serve as an alternative to the tainted drugs people buy on the illegal market.

However, Jennens thinks health officials should go even further when it comes to prescription alternatives to toxic street drugs.

She believes medical-grade heroin should be dispensed, something Interior Health said has been done elsewhere in B.C.

Jennens argues that the types of prescription medication that are being used to help people avoid street drugs are simply acting as a band-aid, for some, leaving them vulnerable to seeking drugs from the illegal market.

“We’ll reduce the pressure on first responders, police [and] our emergency wards at the hospital, and we’ll save lives. If that isn’t the best bottom line, I don’t know what is,” Jennens said.

It’s an option Interior Health isn’t ruling out as it looks to increase access to safe supply around the large health region.

Beyond health interventions, advocates and officials agree a major part of brining down drug deaths is combating the stigma.

Houweling said society needs to change its approach and view people dealing with substance use disorders as people with a health issue not criminals or addicts.

Arteta on Ozil: It is always sad when such a figure leaves
Alabai will move to Real Madrid in the summer. The contract for 4 years is agreed, the salary is about 11 million euros (Marca)
Stefano Pioli: We will look at the table in April. For Milan, every match is the most important
Zlatan Ibrahimovic: Together with Mandzukic, we will scare the opponents of Milan. He signed a contract
Milan scored 43 points in 18 rounds - the best result since the 2003-04 season. Then the club became the champion
Aubameyang scored a double in a Premier League match for the first time in the season. Parti's first assist for Arsenal
Chelsea want to buy Holand in the summer and are ready to break their transfer record (The Athletic)
Source https://globalnews.ca/news/7484911/interior-health-record-breaking-drug-deaths-october/

Turfing Sloan from Conservative caucus not entirely up to O’Toole

One person taken to hospital after North End shooting

Blue Jackets to put streak on the line vs. Red Wings

Australia says ‘no’ to tennis stars amid calls for quarantine change

SIMMONS: Early on, Maurice is loving the NHL’s all-Canadian division

Electrification will usher in era for the 'Revenge of the Miners,' financier Friedland promises

Porsche dealership in Kelowna, B.C., vandalized for the third time

Expect more terrasses in the Plateau, as borough relaxes rules

Too early to say if Quebec's drop in COVD-19 cases will continue, experts say

Is this the season Jets Laine becomes a complete player

‘Now is the critical hour’: Kenney calls on Ottawa to step up support for endangered Keystone XL pipeline

'Gilmore Girls' Actor: I Didn't Storm The Capitol And My Tweet On It Was A Joke

The question looming over N.L.’s winter pandemic election: Will anyone vote?

B.C. real estate regulator clamps down on activities of 'Wolf of Burrard Street'

How to watch the inauguration of U.S. President-elect Joe Biden on CTV News