"Where the hell are you all going with your dogs?!" screamed one, referring to the sudden rise in dog walking and exercise in the first few weeks of the quarantine.

"Go home!" was the not-so-subtle message.

As Italy moves into its third week of national lockdown, a sense of apprehension and impatience permeate the mood here. 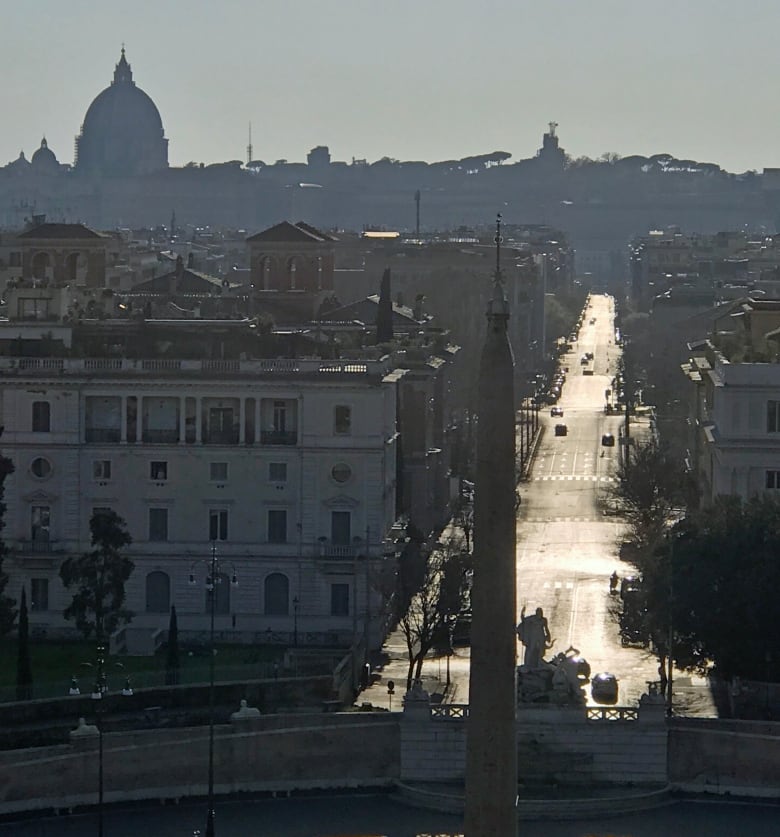 The streets of Rome are empty after three weeks of lockdown. (Megan Williams/CBC)

Restrictions on movement have progressively tightened since the first national lockdown on March 9. Italians have taken to posting shaming videos of neighbours outside and openly chastising others on the street who get too close.

On Friday, Prime Minister Giuseppe Conte issued the fourth version of its "self-certification" form, each new version requiring more information — checking off you've not tested positive for coronavirus, indicating your address and where you're heading, and in the latest version, writing down daily required transit within your district. If found without one, people face fines as high as $5,000. 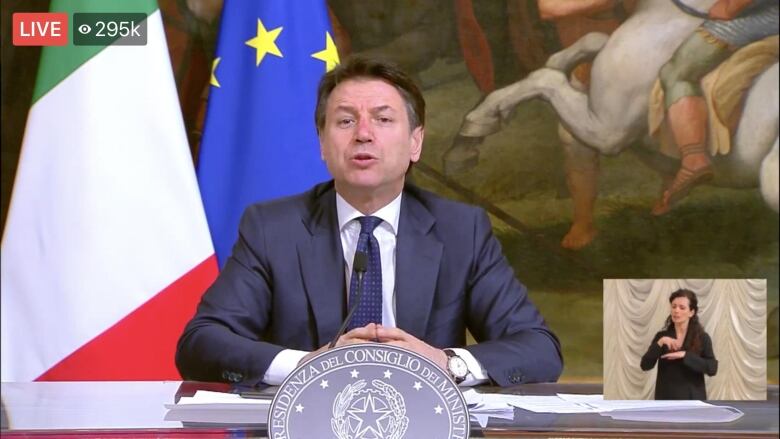 After a glimmer of hope earlier this week that the effects of the quarantine were starting to show, official infections and deaths rebounded, with 919 deaths in one day, a global record. More than 86,000 Italians have tested positive, second now only to the United States. And more than 9,000 have died, most in the northern region of Lombardy.

"The only reason I can think of is that the even stricter measures we took 10 days ago have not yet given us the response we are all hoping for," says Attilio Fontana, head of the region of Lombardy, where more than 50 per cent the deaths from COVID-19 have occurred.

Among the deceased are 51 doctors, half of them family MDs. According to Italy's Civil Protection Agency, doctors now make up nine per cent of confirmed infected.

"The government has been unable to provide us with masks, gloves, anything," says Francesca Fedele, a general practitioner in Padova, the city with the highest numbers of infections in the northern region of Veneto. "It's like we're soldiers fighting an invisible enemy with no weapons or provisions."

Four of the medical and administration staff among the 25 in her practice tested positive this week. None had symptoms. Doctors there and throughout Italy now work mostly over the phone, advising patients with a fever to stay home and call an ambulance if they have trouble breathing.

But Fedele and others are still seeing some patients who show no signs of the virus who need in-person treatment. "I try just to focus on work and not to think about my exposure," she says, aware that about half of infectious people don't show symptoms.

Funerals throughout Italy are now live streamed with only a small group of immediate family members permitted to attend in person, in masks and maintaining several metres distance between them. For those without computers or smartphones, no small number in a country with almost a quarter of the population over 65, priests recite the last rites liturgy over the phone to weeping loved ones. 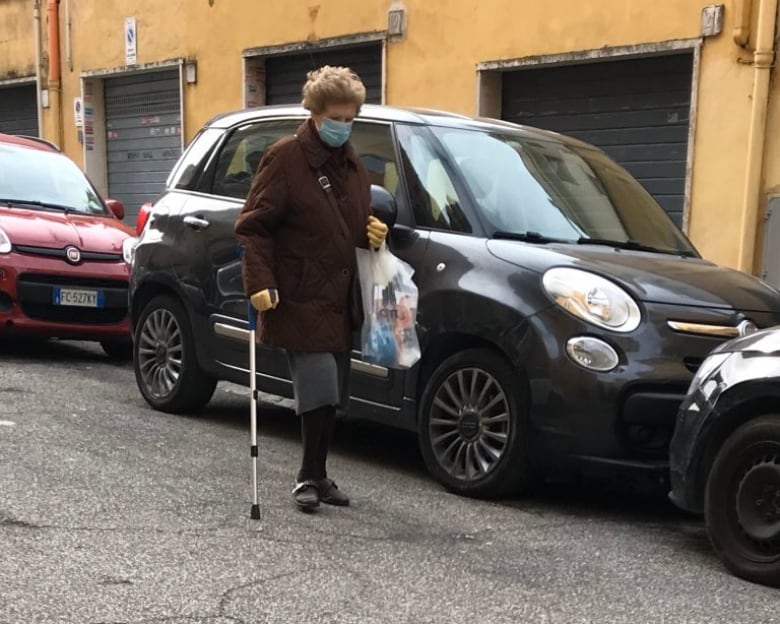 A woman walks home with her shopping. Italians must have a certificate to be out on the street. (Megan Williams/CBC)

"We're offering anything we can think of," says overwhelmed funeral home director Mario Montanari of Brescia, a city devastated by the epidemic. "But unfortunately, the restrictions are tougher every day. So, there's not much more we can do. I'm sorry."

Medical teams have arrived from China, Cuba and Russia, as well as volunteer doctors from other parts of Italy, to assist the beleaguered hospitals in the north.

Canadians, too, are helping.

In the small northern city of Cremona, famed for its excellence in violin-making, some eight Canadians are among a medical and support team of 70 that last week set up an emergency field hospital in a parking lot outside Cremona's main hospital. They belong to the donation-funded Christian NGO Samaritan's Purse, founded by the son of controversial American evangelist Billy Graham.

So far one patient who had been sick for days has died in their care.

WATCH | Canadians on medical team helping out in Italy

‘We come in Jesus’ name,’ says Bev Kauffeldt, as her evangelical Christian aid organization sets up a field hospital in Cremona, Italy.

"We want people to know he didn't die alone," says Bev Kauffeldt from British Columbia, who heads logistics for the NGO. "He was with our medical staff praying with, being with him, because there's a lot of people here dying and they can't have family members in."

In the permanent hospital next door, some 50 patients are currently on the still-inadequate number of ventilators. "Unfortunately," says Kauffeldt,  "they haven't had anyone come off their ventilators alive [since the start of the outbreak]. No one has survived."

As health workers in northern Italy desperately scramble to save lives, fears are growing of a similarly unmanageable epidemic in the south of the country. 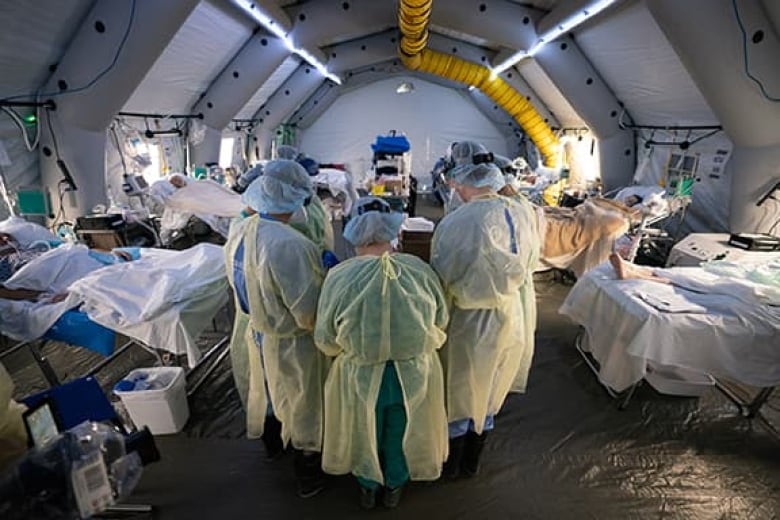 When word got out in early March that Prime Minister Conte was set to announce the first national lockdown, thousands of students and other southerners living in Milan and surrounding cities made a mad dash to catch the last trains south.

More than two weeks later, those chickens have come home to roost: infection rates in the most populous southern regions of Campania, Puglia and Sicily have jumped.

"It's largely the parents of the kids who came back from university [that first week of March] who have fallen sick in the south," says Giorgio Sestili, who collates research on the Facebook page Coronavrius, Data and Scientific Analysis.

But it's not just those returning home from the north who have helped the COVID-19 spread in southern Italy.

"Here in Sicily, the understanding of the emergency came later," says graphic novelist and journalist Marco Rizzi of Trapani. He cites the outbreak in the nearby town of Salemi after 100 or so people disobeyed national directives and came together to celebrate someone's 18th birthday.

At least 15 people caught the virus and the grandfather of the 18-year-old has died.

"Maybe we needed this kind of tragedy to understand the seriousness of the disease," says Rizzo. "But sadly, people from the north are still coming."

La Liga wants to start the new season in September with 30% of the stands filled
The management of the Premier League excludes the possibility of canceling the relegation this season
In 2001, Beckham played the best match for the national team. He was inspired by a girl with a unique disease-an inverted heart
Inter will get 15 million euros if PSG sell Icardi to another Italian club
Langle does not want to leave for Inter from Barcelona
Lineker on Messi: I am a fan of Ronaldo, but the title of the best player in the world can not even be discussed
Gianfranco Zola: Hazard and Willian suffered from Sarri's training
Source https://www.cbc.ca/news/world/italy-sits-tight-under-lockdown-as-deaths-and-infections-jump-and-coronavirus-spreads-south-1.5512373?cmp=rss

Weather: Cooler, chance of showers, no humidex in sight

Protests flare around the United States over Minneapolis killing

Coronavirus: Ontario realtors offer tips on how to get your house ready for sale

Why Canadians can’t ignore this sign of bladder cancer, even in the COVID-19 pandemic

How finding a ministerial home for CMHC caused ‘madness’ in November

From AC units to patio decor: 6 ways to upgrade your COVID-19 summer

ASK AMY: Handyman’s attitude isn’t much of a fix

Jumping back into the market? Watch for these five danger signs

Quebec town across from N.B. community with COVID outbreak gets testing centre

Protesters prepare to rally in Toronto against anti-black, Indigenous racism

Russians rush to public bath after lockdown without hot water

The pandemic could be an opening to build a better Parliament

Can a store make me wear a mask to shop? Your COVID-19 questions answered

Germany, a global leader on COVID-19 response, cautiously comes out of lockdown

Cricket-West Indies to temporarily halve salaries of staff and players

Uzbekistan extends duration of coronavirus curbs, but eases some

Unrest flares in U.S. cities despite arrest of Minneapolis policeman

Life and death in the Sheridan Villa COVID ward