As controversy continued to swirl over the “White Lives Matter” T-shirt he debuted earlier this week in Paris, Kanye West took aim at his critics in an interview with Fox News’ Tucker Carlson.

“I wrote ‘White Lives Matter’ on a shirt is because they do. It’s the obvious thing,” West said, echoing a social media post he made on Wednesday.

The slogan has been categorized as a “white supremacist phrase” and the rapper faced fierce opposition to the garment, which Black conservative commentator Candace Owens also wore at Paris Fashion Week.

West told Carlson that he found the idea of him wearing it amusing.

“I thought the shirt was a funny shirt,” he said. “I thought that the idea of me wearing it was funny.”

The Grammy winner went on to tell Carlson he had become a frequent target of left-leaning artists after he publicly embraced former U.S. President Donald Trump by wearing a Make America Great Again hat in public. 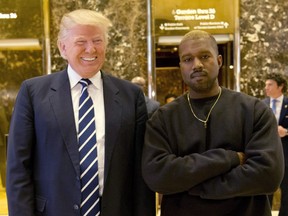 In this Dec. 13, 2016, file photo, President-elect Donald Trump and Kanye West pose for a picture in the lobby of Trump Tower in New York. Photo by Seth Wenig, File /AP Photo

“When Trump was running for office and I liked him and every single person in Hollywood, from my ex-wife to my mother in law, to my manager at that time, to, you know, my so-called friends-slash-handlers around me told me if I said that I liked Trump that my career would be over, that my life would be over,” he said. “They said stuff like, ‘People get killed for wearing a hat like that.’ They threatened my life. They basically said that I would be killed for wearing the hat. I had someone call me last night and said anybody wearing a ‘white lives matter’ shirt is going to be green-lit. That means they are going to beat them up if I wear it. I’m like, you know, ‘OK, green light me then.’”

Elsewhere, West accused his former spouse Kim Kardashian of trying to sway his political opinions. “There was manipulation,” he said. “Me not saying I like Trump was a form of manipulation.”

West was criticized by Gigi Hadid, Jaden Smith and Vogue editor Gabriella Karefa-Johnson for the T-shirt. Meanwhile, Adidas has put its partnership with the designer “under review.”

When Carlson asked West, who also ran for president in 2020, why the fashion piece caused so much controversy, he said it was because he wasn’t conforming to ways the media thinks he should act.

“Because the same people that have stripped us of our identity and labelled us as a colour, have told us what it means to be Black,” he said.

Polygamous cult leader accused of having 20 wives, many underage

No. 2 Texas rolls into Jimmy V Classic matchup vs. No. 17 Illinois

Minnesota board: Moorhead-made THC gummies are too potent

Expect 'difficult' December with COVID-19 and flu on the rise, Boileau says

Adam Pankratz: When it comes to capitalizing on LNG, Canada could learn a thing or two from Qatar

Kitchener continues to develop official plan for next four years

Young kids at higher risk from this year's flu strain, parents urged to get them vaccinated: B.C. health officials

LILLEY: Carey Price may have made an unexpected save on Trudeau gun grab

Mall of America settles lawsuit over boy thrown from balcony

LILLEY UNLEASHED: Did NHL legend Carey Price just make a save for hunters and gun owners?

Give the gift of time this holiday season

Hanes: Polytechnique honouree remembers as she reaches for her dreams

Lula’s promise of a ministry of indigenous people in doubt