Robert Lewandowski at last scored a goal in a World Cup match on Saturday, helping Poland beat Saudi Arabia 2-0 and boosting his team’s chances of reaching the knockout stages.

Lewandowski shed tears after scoring in the 82nd minute. He raced toward the corner with his arms outstretched, then stayed slumped on the field as teammates rushed to congratulate him. He got up, rubbed his face, and blew a kiss to the crowd.

“Today everything I had inside, the dreams, the importance of the occasion, all those dreams from my childhood came through,” Lewandowski said. “It was so significant.”

One of the best forwards in the world, Lewandowski’s barren streak at the World Cup was somewhat puzzling. Now, in his fifth match at the tournament, it’s over. 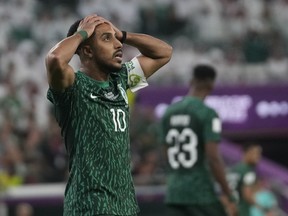 Saudi Arabia’s Salem Al-Dawsari holds his head after missing a chance to score during the World Cup group C soccer match between Poland and Saudi Arabia, at the Education City Stadium in Al Rayyan , Qatar, Nov. 26, 2022. Photo by Darko Vojinovic /THE ASSOCIATED PRESS

“I always wanted to score at the World Cup and this dream came true,” said Lewandowski, who had a penalty saved in Poland’s 0-0 draw with Mexico on Tuesday. “It’s not easy, because we didn’t have many opportunities in the first match and I missed that penalty.”

Against Saudi Arabia, Lewandowski also set up the opener in the 40th minute when he kept the ball in play after goalkeeper Mohammed Al-Owais’ initial block, then laid it back for Piotr Zielinski to knock in.

Lewandowski, who had no involvement in any goals in his first four World Cup games, also hit the post, and Al-Owais later denied the Barcelona player from scoring another goal toward the end of the match.

It was the one that went in that brought tears to the 34-year-old striker’s eyes.

“The older I get, the more emotional I get,” Lewandowski said, referring to his reaction after finally scoring. “I’m aware that when it comes to the World Cup, that this might be my last World Cup. And I wanted to underline that I played at World Cups and I scored.”

“I know how deeply he lived the last match,” Michniewicz said. “I’m very sorry he wasn’t lucky enough, he hit the post and the goalkeeper made a save. He could have had a hat trick today.”

Poland was scrambling for long periods at the Education City Stadium as the Saudi team was pushed forward by enthusiastic fans in what seemed like a home game. The frustration was clear on Lewandowski’s face as Poland’s yellow cards mounted.

Saudi Arabia had a chance to equalize at the end of the first half but Poland goalkeeper Wojciech Szczesny saved Salem Al-Dawsari’s penalty kick. He then blocked Mohammed Al-Burayk’s shot from the rebound.

Szczesny was also called upon in the second half, when Saudi Arabia created several good chances.

“There is some part during the game, you must be more efficient,” Saudi Arabia coach Herve Renard said.

Renard’s team had 16 attempts at goal, twice as many as Poland.

“Like I said before, we are still alive,” the French coach said. “This is the most important.”

Poland will next face Argentina, while Saudi Arabia will meet Mexico in their last Group C games.

Pet grooming boomed in Toronto during COVID: People ‘more into their dogs.’

Choking case at Ottawa Fire Station 47: 'Our client is still traumatized by the assault'

FOREVER FRIEND: Bonded mother and son bunnies up for adoption

Israel will not halt judicial overhaul legislation ‘for even a minute’: justice minister

Bulls look to build on ‘positive’ step against struggling Spurs

Amid crisis, Haitians find solace in an unlikely place: soup

Indiana officer fatally shoots man who had pulled a handgun

Celtics in search of more energy in visit to Pistons

BRAUN: Don’t forget about Vitamin D as winter drags on

Dodgers to retire Fernando Valenzuela’s No. 34

LILLEY: United front key for premiers as they bargain health deal with Trudeau

Working in the Metaverse? Some Canadian firms are setting up shop in the virtual world

Duke and No. 23 Miami jockey for ACC position

Minnie Driver: I faked an orgasm to get a job

Partner arrested for attempted murder after woman falls from balcony

3 in hospital after crash sends vehicle into ditch in Mississauga, Ont.

Republicans criticize Biden for waiting to shoot down Chinese balloon

At least 24 dead in Chile as wildfires expand; foreign help on the way

PAGET: Brace yourself – Valentine’s Day is coming for you

‘Knock at the Cabin’ knocks off ‘Avatar’ at box office

‘Knock at the Cabin’ knocks off ‘Avatar’ at the box office

Pope hits back at critics who used Pope Benedict XVI

Super Bowl a showcase for next generation of quarterback talent

Vancouver weather: Showers in the morning, then rain overnight