Longtime employees of Vancouver weekly publication The Georgia Strait, including editor-in-chief Charlie Smith, have been laid off.

Smith, senior editor Martin Dunphy and reporter Carlito Pablito were given the boot days after the announcement that the alternative weekly has been acquired by new owners Overstory Media Group.

In a post written on Substack, Smith said he is grateful to have worked at the Straight for 28 years where he was given “tremendous freedom.”

“I’m healthy and happy and looking forward to the future. I’ve been given many breaks in life and we’ll see what doors open for me in the weeks and months to come.”

Smith thanked his colleagues for their work during the pandemic and getting the publication “to the point where it could be purchased by a new owner.”

Former staff reporter Carlito Pablo wrote a succinct farewell on Twitter, saying: “It’s been one hell of a ride. So long.”

Wednesday appeared to be Smith’s last day at the Straight, with his Twitter bio saying he won’t be able to access his former work email address after Sept. 28. Smith started as a news editor at the Straight in 1994 and became editor-in-chief in 2005.

Founded by Vancouver resident Dan McLeod in 1967, the Straight went on to be Canada’s largest urban weekly publication known as an outspoken alternative outlet and for its arts and entertainment coverage. McLeod was editor and publisher until 2020. 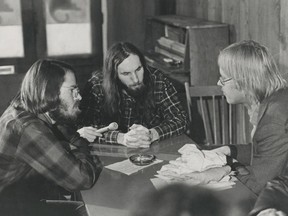 That year, the Straight was purchased for $1.25 million by Toronto-based Media Central Corporation Inc., which filed for bankruptcy in March.

The subsequent acquisition by Overstory was announced in a news release on Tuesday, touted as a return of the company to West Coast ownership. The acquisition price was not disclosed.

In a statement, Overstory pledged to reinstate the Straight’s focus on arts and culture and enhance coverage of news, entertainment, music and food. It has posted positions for a new arts editor, music editor and food writer.

The statement also hinted at more change to come.

“Over the coming weeks and months we’re going to take time to talk with readers, partners, and the community at large to redefine and rebuild the publication that’s lost its way over the past several years,” said Overstory CEO Farhan Mohamed.

“At its best, The Straight captured and explored the beating heart of Vancouver’s culture — and became part of it. We are committed to bringing that back.”

Overstory  has more than 50 employees and 12 digital publications, including the Capital Daily in Victoria, Burnaby Beacon, and Fraser Valley Current.

Deshaun Watson on debut: ‘Don’t know when it’s going to come back’

Severely injured humpback travels in pain from B.C. to Hawaii

Griner swap wasn’t what US hoped for, but what it could get

Edson teacher charged with luring a child and sexual interference

'It's the life I wanted,' Koné says of jump from CF Montréal to Europe

While light on details, experts pleased with N.S. climate plan

Police appealing for witnesses after string of fires in Bowmanville, Ont.

OC Transpo ridership up in October, but still short of predictions

Dorval kicks off Annual Holiday Market: ‘It is a way of helping out’

Commons clerk Charles Robert retiring after being accused of bias, sleeping on the job

HANSON: Does Trump really want to be president again?

To resolve youth violence, Canada must move beyond policing and prison

No. 11 Auburn puts unbeaten mark on the line vs. Memphis

Lululemon shares down in holiday quarter as consumers curb spending

WORLD CUP: Another encounter between Argentina and Netherlands

COP15 biodiversity summit in Montreal: Canada failed to meet its 2020 conservation targets. Will 2030 be any better?

FedEx driver accused in girl’s slaying dropped off her gift

Save the date: Peach Pit will headline Altitudes Music Festival in Kelowna

Opinion: Why we have ambitious goals for COP15

Idaho student stabbings: Cops on the hunt for car seen near scene of the crime

RAPTORS BLOG: Lakers game showed good progress from VanVleet and Barnes but much more to go

Rare Apollo mission moon rock back in Cyprus after 50 years