BALTIMORE — Normally the loss of an all-star second baseman would be cause for concern for a teaming eyeing a big run into the postseason and beyond.

But when the player replacing injured Santiago Espinal is a two-time all-star himself, well, the pain can go away in a hurry.

That’s exactly what the Blue Jays are getting from veteran Whit Merrifield, who made things happen once again on Monday during a 5-1 win over the Orioles on a miserable night for baseball at the sloppy track that was Camden Yards.

A game that was delayed midway through the eighth was ultimately called 51 minutes later due to conditions that worsened rather than improved.

The result allowed the Jays to reduce their magic number to lock up the top seed in the American League wildcard race to one. A clinch was possible later in the night if the Detroit Tigers were to upset the  Mariners out in Seattle.

The Jays improved to a season-high 22 games above .500 for the first time since the end of the 2015 campaign.

But amid the bone-chilling cold on Monday, Merrifield continued to heat up as he cruises towards the first post-season appearance of his career.

The versatile infielder, who has seamlessly moved into Espinal’s spot while rediscovering his form on offence, drove in a pair of runs in the second inning and used his base running prowess to score another in the fifth.

“What he’s been doing is kind of what he’s been doing his whole career,” Jays manager John Schneider said of Merrifield, who was acquired from the Kansas City Royals at the trade deadline. “Not just with his versatility, but with the at-bats, his ability to run the bases … just little tiny things that he does to impact a game that have really gone a long way.”

With his two runs scoring single one Monday, Merrifield has now hit safely in 11 of his past 12 games (batting .421 over the previous 11 heading into the first of three against the O’s.)

And it’s clear that he’s benefiting from the increased  and consistent playing time in the absence of Espinal, who has now missed 11 games with an oblique strain.

“There is that,” Merrifield said, recently, of the benefits of consistent playing time. “Before, it was almost like I knew I was going to have a couple of at-bats to try to do something. Now I’m more in the flow of the game from the start and it helps as little bit.

“At this point of the year, it’s not about whether I’m comfortable or not. It’s about winning games. I’m just glad I’m able to contribute and do some things that are good to help us win.”

That feeling of accomplishment has added to the anticipation of heading to the post season for the first time in his seven-year career. Obviously acquiring a player of proven talent like Merrifield could be huge as the playoffs unfold, especially given his latest production.

As well, his base running has been both electric in games and instructive to his new teammates.

“It’s always good to have guys who can set a really good example on the bases that guys can feed off of,” Schneider said. “He’s an extremely good baserunner. Conversations he’s had with younger players since he’s been here on technique has been awesome. He draws attention to it when he’s out there.” 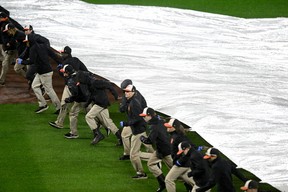 The grounds crew puts the tarp on the field in the eighth inning between the Toronto Blue Jays and the Baltimore Orioles at Oriole Park at Camden Yards on Monday, Oct. 3, 2022 in Baltimore, Maryland. GREG FIUME/GETTY IMAGES

It was a game played in unsightly conditions for both pitchers and hitters, but Toronto starter Jose Berrios served up some encouraging signs for the postseason.

Berrios went six innings on a night that got worse the deeper the game went, holding the O’s to three hits and one run while walking three and starting out five.

It was certainly a notable improvement from his previous two starts in which he took the loss and allowed a combined 11 earned runs. With the victory, Berrios improved to 12-7, matching his win total from 2021.

A year ago, Oct. 3 was a difficult day to digest for the Jays as they finished the 2021 with 91 wins only to watch the Red Sox score a late win over the Nationals that eliminated the Jays from the post season.

Fast forward a full calendar year and the Jays matched that 91 total, tied for the sixth most wins in a season in franchise history.

“You from being really excited to the exact opposite in about 40 minutes,” Schneider said. “There was a lot going on. Fittingly enough, here we are again a year later.”

Besides Merrifield’s heroics on that two-out, two-run single in the second, the most notable blast of the evening came off the bat of Vlad Guerrero Jr.  The Jays first baseman’s 32nd homer of the year travelled 422 feet to left field, a momentous blast given the conditions … Merrifield’s evening had a chance to get even better in the eighth when he came to the plate with the bases loaded and two out, only to see the rain delay invoked … Some would suggest that call was long overdue on a miserable night for baseball — or any sport — with the remnants of Hurricane Ian still socking the Baltimore area. But with more bad weather in the area for Tuesday, it was play ball despite a game-time temperature of 9C and rain that increased in intensity throughout … Seemed odd officials waited so long to call the rain delay — with the infield puddling. Even crazier was the 51-minute delay to make it official.

Icy cold, wind and a chance of more snow in the forecast for parts of B.C.

In Montreal, soccer fans look to the future as Canada exits World Cup

LILLEY: Municipalities driving up cost of housing, Ford right to clip their wings

Mosaic’s Allison in quiet West Coquitlam setting, but close to the action

November home sales down 20%, year to date sales on track for record: Calgary board