Metro Vancouver in for some cold and snowy weather this week

Some Metro Vancouver residents could be walking in a winter wonderland for the start of December this week.

Periods of snow or rain are expected Tuesday and Wednesday, with daytime highs around 5 C and overnight lows dipping down to – 3 C.

On Thursday, the first day of December, there’s a good chance of snow flurries in the morning, and at night when the mercury is expected to drop to – 6 C.

That means Vancouver will be opening five extreme weather response shelters (for temperatures that feel like zero or colder) in addition to the five temporary shelters that open every night from Nov. 1 to March 31. If the temperature feels as low as – 5 C, the city will also open five warming centres. 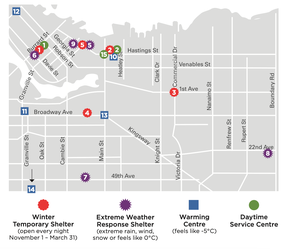 Source: The City of Vancouver.

Elsewhere in B.C., Environment and Climate Change Canada has issued a dozen snowfall warnings or winter storm watches for communities in the southeast and the northern parts of the province.

A Pacific frontal system is expected to sweep through the B.C. Interior this weekend, bringing heavy snow and strong winds  before it tapers off on Sunday.

The weather office says the storm is expected to bring up to 25 centimetres of snow.

The agency warns drivers that heavy snow is also expected in the coastal passes and combined with gusting winds, it will create poor driving conditions.

The most challenging drives this weekend will be for those travelling from the Interior to the coast, according to Kelly Sonnenburg, a meteorologist at The Weather Network.

Sonnenburg said the Coquihalla Highway is expected to receive between 20 to 40 centimetres of snow with some icy precipitation mixed in.

“With temperatures well below the freezing mark most, if not all, precipitation will fall as snow,” said Sonnenburg. “It will have been over three weeks since Vancouver and the lower elevations had received snow, and this event could be much more significant than the last.”

This week, daytime highs will be in the minus double digits for many parts of central and northern B.C. and in the minus single digits in the south, the network said.

B.C. Housing announced earlier this month that the province would have 2,080 temporary winter shelter spaces and more than 480 extreme weather response shelters.

With the new spaces, more than 4,910 shelter spaces are open in 50 communities throughout the province, including permanent, temporary and emergency shelters, according to B.C. Housing.

—with files from The Canadian Press

Pakistan says mosque bomber may have had ‘internal assistance’

Your Saskatchewan photo of the day: February 2023

Market trends: Will 2023 be ‘the year of the sideline buyer’?

‘MOVING ON FROM DAYTIME’: ‘Dr. Phil’ to end after 21 seasons

Jerome Powell likely to stress U.S. Fed’s inflation fight is far from over

Free hotel breakfasts are getting bigger and better

This could be the worst year for ransomware attacks

The kindness of strangers: Good Samaritan comes to aid of West Island senior

Ukraine: After losing Kherson, Russia tries to destroy it

Brownstein: Vintage Corvette to rev up exhibition at Montreal museum

Boost for Ukraine as U.S. expected to send longer-range rockets

Nigeria’s election: when is the vote and what’s at stake

‘It was my heart’: Women with heart disease face barriers to care in Canada, report says

Suspects arrested over Pakistan mosque blast, police focus on how bomber got in

3 rappers missing for days since Detroit gig was scratched

Montreal's port is a hub for exporting stolen cars. Is enough being done to stop it?

Was your car stolen? It may have left Canada through the port of Montreal

Jagmeet Singh says the Canada Health Act could be used to challenge private health care. Could it?

Why focusing on Bobby Hull's hockey legacy, but not his abuse allegations, is a problem

Bobby Hull's wives say he beat them. The hockey world doesn't want to talk about that

This is what the law actually says about privatizing health care

Radioactive capsule that fell off truck found in Australia

No. 5 Arizona welcomes Oregon with more vengeance in mind

No. 9 UCLA looks to rebound vs. Washington

Nevada makes history at home in upset of No. 22 San Diego State

Peshawar, the city of flowers, becomes epicenter of violence

One dead following crash on Highway 97 near Monte Creek, B.C.