As the city most involved in Canada's effort during the First World War, Halifax was a hub for troops heading overseas and those returning from the horrors in Europe, and its harbour was filled with ships carrying supplies.

And on the morning of Dec. 6, 1917, these realities merged in a horrific event known as the Halifax Explosion. It remains the worst disaster in Canadian history, killing 2,000 people and injuring 9,000.

On that day, the Mont-Blanc, a French munitions ship, and the Imo, a Norwegian steamship carrying Belgian relief supplies, collided in Halifax harbour. Besides the casualties, two square kilometres of Halifax were levelled by the blast.

The city needed to begin its rescue and recovery effort, but faced several challenges. There weren't any emergency safety organizations in place, and the police and fire departments were small, consisting of only 39 policemen and 32 permanent and 120 volunteer firefighters, according to John Boileau, the author of . 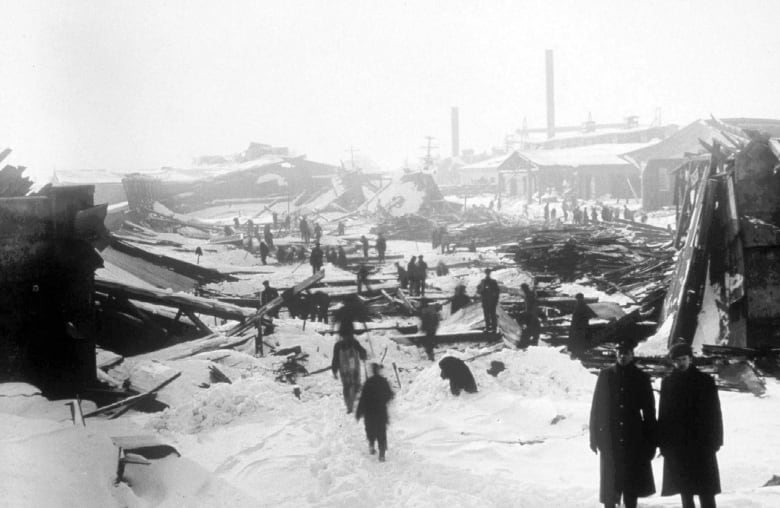 The aftermath of the Halifax Explosion is shown in this 1917 file photo. (The Canadian Press)

While Halifax's role in the First World War ultimately led to the explosion, which marks its 104th anniversary Monday, it was "also the main reason why the reaction to the disaster was so quick and co-ordinated," said Boileau.

"This large military and naval presence, including the medical staff and the hospital facilities, were instrumental in saving lives, preventing further deaths, [providing] first aid to casualties," he said.

'A number of unsung heroes'

The role of the military in helping Halifax recover was vital, but one that is often overlooked, according to Boileau. He said it's his personal mission to change that and better recognize the efforts of military members.

Boileau said that for many years after the explosion, many Halifax residents harboured a grudge against the Royal Canadian Navy for its perceived responsibility for the explosion because it was in charge of ship movements in the harbour. But he said the army received neither blame nor credit from citizens for its role in the relief effort.

"I believe there were a number of unsung heroes there which have never been properly acknowledged," he said. 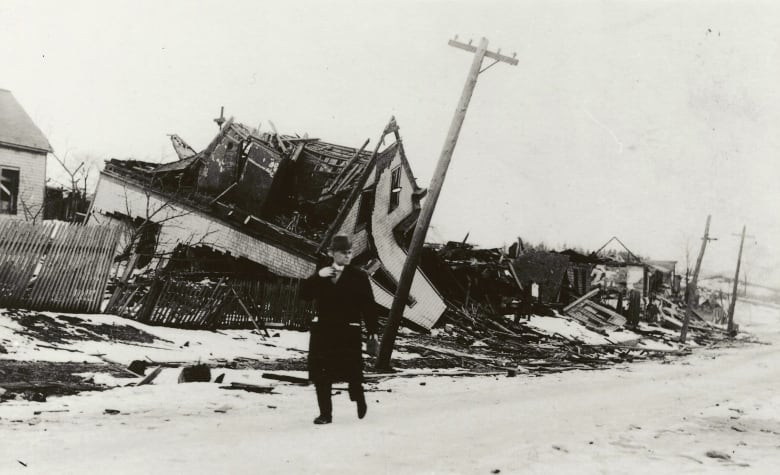 At the time of the explosion, Halifax had a population of 50,000 people. There were 5,000 Canadian soldiers stationed there, with the bulk responsible for guarding the forts in the area, and the rest either coming from or going to Europe.

Boileau said on top of that, there were a few hundred American, British and Canadian sailors in the city, as well as 600 military medical personnel and multiple military treatment facilities.

Military members were ideally suited to help Halifax emerge from its darkest day because they were trained to operate in disaster zones — and Halifax looked like one on Dec. 6, 1917.

Lt.-Col. Frank McKelvey Bell, who was the assistant director of medical services for Military District 6 at the time of the explosion, believed that to be true.

"I have never seen anything on the battlefront equal to the scenes of destruction that I witnessed in Halifax today," he said that day. 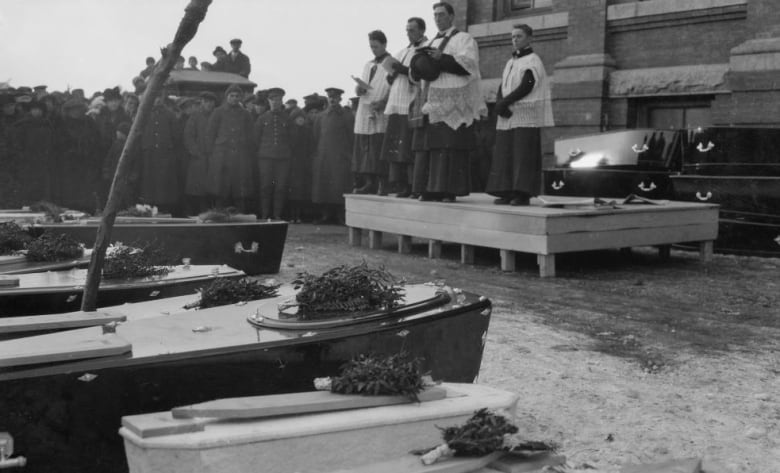 A funeral for some of the victims of the Halifax Explosion. (City of Toronto Archives, Fonds 1244, Item 2455)

Boileau said soldiers and sailors helped perform a variety of tasks, including digging through rubble for survivors, putting out fires, digging graves, delivering food and guarding against looters. The effort brought order to the chaos that gripped the city.

Included in this relief effort was an anonymous Philadelphia man who volunteered for the British Expeditionary Force fighting in northern France. He left his home in November 1917 for Halifax, where he was to await transportation overseas. He arrived just days before the explosion and detailed his memories in a 15-page letter.

At the time of the explosion, the man was at the Halifax Armoury. After the explosion, he and other soldiers suited up and headed out, with fires "raging in all directions."

"Wires were strewn across the streets in all directions," he wrote. "'Live' ones as well as 'dead' ones; we could not tell which was a 'live' wire or which one was not charged. Houses shattered to pieces as though they were mere match wood."

He even came across a trainload of Canadian veterans who had just returned from France. He noted the irony: while they had managed to make it back to Canada after serving overseas, it was here most of them died. 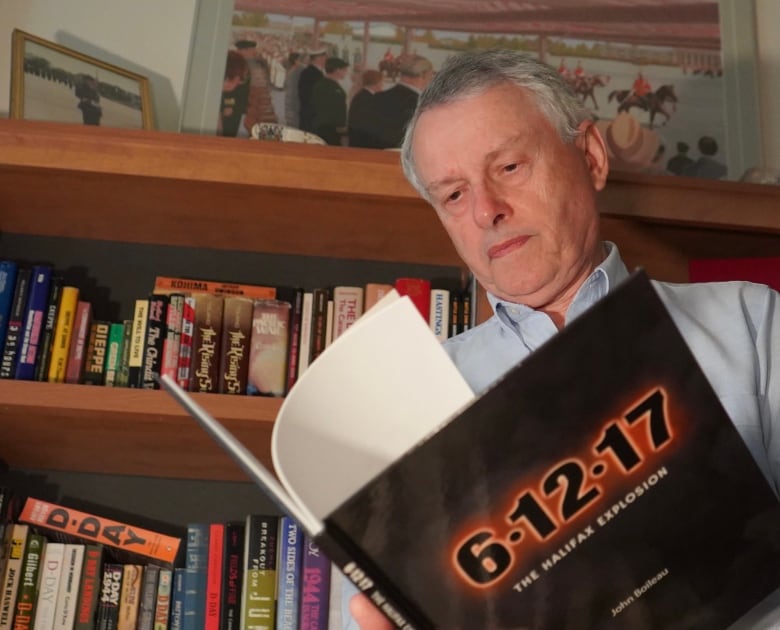 Author John Boileau holds a copy of his book 6:12:17: The Halifax Explosion. He says he can't understand why the military's role in Halifax's recovery effort from the explosion doesn't get a lot of attention. (Craig Paisley/CBC)

One of the things the man did as part of the relief effort was work at the morgue, which was located in the basement of the Chebucto Road School, known today as the Maritime Conservatory of Performing Arts.

"A gruesome, nasuating [sic] job; trying to identify those poor victims by arranging any little scrap of evidence that could be found on them, so as the relatives and friends who continually filled the morgue would have a chance to recognize their belongings," he wrote.

"In a great many cases it was utterly impossible to identify any of them from the condition they were in. The heart rending scenes witnessed there will live in my memory as long as I live." 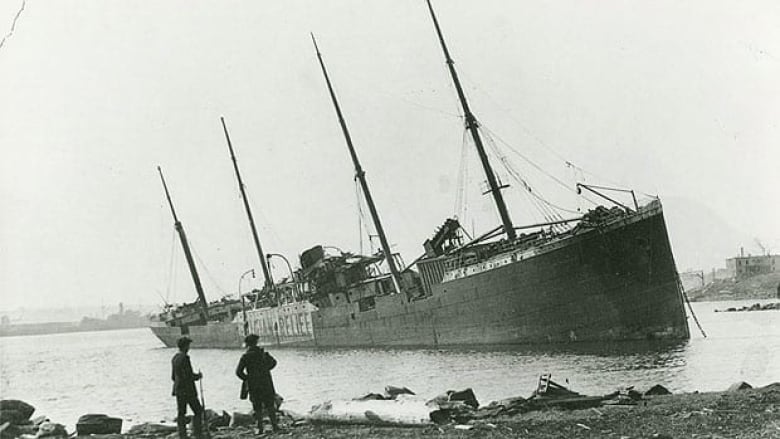 The Norwegian steamship, Imo, is beached on the Dartmouth shore after the 1917 Halifax Explosion. Its collision with the French munitions ship, Mont-Blanc, sparked the fire that set off the explosion. (Nova Scotia Archives & Record Management/The Canadian Press)

The man helped dig trenches where the victims could be buried. The work was carried out amid "intense cold" and "rain, snow sleet and strong winds."

As a place with soldiers coming and going, the volunteer wouldn't have been the only person who found himself in new surroundings, only to be caught up in the Halifax Explosion.

Pamela Anderson splits from husband #5 a year after ‘whirlwind’ wedding

‘Life and death’ at sea: log keeps Tonga’s ‘Aquaman’ from going under

MP Sukh Dhaliwal considering a run for mayor of Surrey

TCU braces for stern test from No. 15 Iowa State

Analysis: Quebec's health-care system has already reached the point of no return

Isobel Mackenzie: We need to get rapid tests for COVID out to B.C. seniors

'I feel unsafe': B.C. kids exposed to COVID-19 can go to daycare if symptom-free

Blandino: NFL ‘heading in direction’ of fixing all obvious gaffes

Bengals’ Hendrickson latest NFLer back from concussion in under a week

Outdoor rinks open for the season in Peterborough, Ont.