Everywhere Julia Kole door knocks in the riding of Mississauga-Lakeshore she hears the same message — life has become so expensive.

The NDP candidate, who is running to be the riding’s next MP, is in competition with former Ontario finance minister and Liberal candidate Charles Sousa, Peel Regional Police officer and Conservative Party candidate Ron Chhinzer, and 37 other candidates.

The Dec. 12 byelection could be viewed as a showdown between new Conservative Party Leader Pierre Poilievre and Liberal Prime Minister Justin Trudeau.

The byelection gives residents a chance to “shake things up,” to consider different options and candidate choices, she said.

“It can be an amazing opportunity for the NDP and people who really resonate with the values of the NDP to send a strong message to Ottawa,” Kole said in an interview.

Despite the long-standing reputation of Mississauga as a relatively affluent bedroom suburb, residents are facing all the same affordability issues — rapid increases in housing, food and gas, she said.

As a community leader, advocate, and experienced Parliamentarian, @SousaCharles has a proven track record of supporting families and workers.

We’re excited to welcome him as our new Liberal candidate for Mississauga–Lakeshore. pic.twitter.com/gnecrwuGk8

Mississauga-Lakeshore, which covers the southern part of Mississauga, between Oakville and Etobicoke, has voted Liberal federally since 1993 except for the period of 2011-15 when it was held by Conservative Stella Ambler.

Sousa, who brings a strong business background and held the riding for the provincial Liberals for 11 years until the 2018 election, said he is running because he believes he can be the community’s strongest voice in Ottawa.

“I have seen firsthand the opportunities and challenges that are facing our community, and I am ready to work with Justin Trudeau and the entire Liberal team to make life more affordable for Canadians, take strong climate action, create new jobs, and build an economy that works for everyone,” Sousa said in a statement. “While the Conservative Party proposes policies that would take us backward, roll back our climate action, and cut services that people in Mississauga-Lakeshore rely on, I will remain focused on the future, moving our community forward and building a place where there is room for everyone to succeed, to learn, and to help each other.”

Chhinzer’s main message, according to his website, is “send Justin Trudeau a message.” 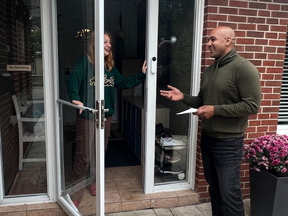 The Conservative candidate brings more than 20 years of policing experience and served as a founding member of the Toronto Police Service’s Integrated Gang Prevention Task Force.

Voters can cast ballots in advanced polls on Dec. 2-5.

Information on the byelection, including the names of all registered candidates, can be found at elections.ca.

How to stay safe in extreme cold: Recognizing the signs and symptoms of frostbite, hypothermia

NHL stars coming to Toronto in 2024

Ozzy Osbourne is determined to get back on stage

All eyes on the sky as Chinese balloon heads toward Atlantic

Jaren Holmes paces No. 13 Iowa State past No. 8 Kansas

LACKIE: Could consumer sentiment be improving?

Kyrie Irving ruled out ahead of Nets’ matchup with Wizards

Man given 16 years for shooting at kids throwing snowballs

Soccer-Milan derby an opportunity not to be missed, says Pioli

Celebration of life for Gino Odjick to begin at 2 p.m.

U.S. considering plan to down Chinese balloon over Atlantic

U.S. moving ahead on plan to down Chinese balloon over ocean

Biden says he gave the order for Chinese balloon shootdown

Firefighters battle dozens of wildfires in Chile, death toll at 22

Arrest made in shooting at San Francisco synagogue

Indian police crack down on illegal child marriages, over 2,000 arrested

Spirited Hornets, Magic look for success down the stretch

Eastern Illinois to discipline player who swung at fan

HOOPS HATE ON: Behind the Charles Barkley-Michael Jordan feud

Firefighters battle dozens of wildfires in Chile as emergency extended

Harry and Meghan, Duke and Duchess of Sussex, to make romcoms