New York's multi-billion-dollar government-run pension fund announced today that it's pulling investments worth more than $7 million out of some of Canada's major players in the oilsands.

The New York State Pension Fund — the third largest such fund in the United States — said it would be selling off securities in several Canadian oilsands companies and would not make future investments in them.

The seven companies are:

Suncor, one of the oilsands' largest players, was not on the list.

The New York State Common Retirement Fund, worth $247.7 billion, manages over a million state and municipal employees' pensions. In December, the fund announced it would transition its financial portfolio to net-zero friendly investments by 2040.

State comptroller Thomas DiNapoli said in a media statement Monday the fund is pulling out of companies that don't have viable plans to adapt to a "low-carbon future."

"As nations around the world become increasingly serious about addressing the threat of climate change, and as market forces drive a low-carbon economic transition, we need to make sure our investments line up with this reality," DiNapoli said. "Companies responsible for large greenhouse gas emissions like those in this industry pose significant risks for investors."

"That is why it is so important for Canada to continue to move forward on fighting climate change and reduce our emissions in all sectors," Trudeau said. 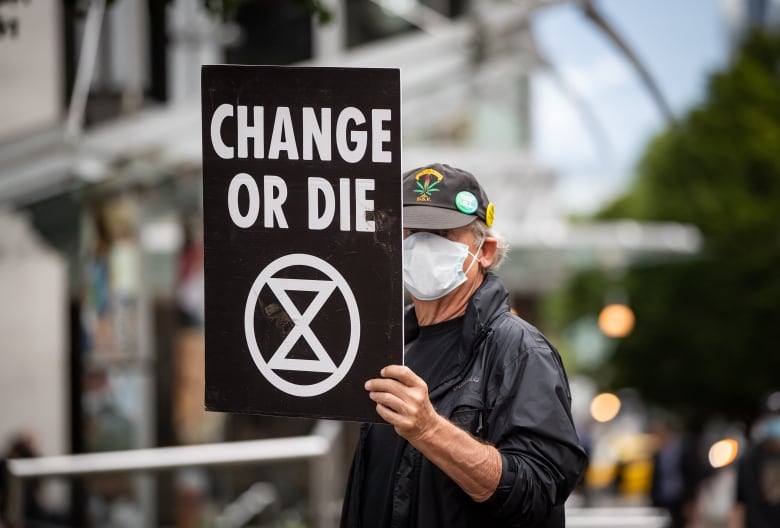 A man holds a sign outside of the main RBC Royal Bank branch during a protest in Vancouver on Tuesday, June 23, 2020. (THE CANADIAN PRESS/Darryl Dyck)

Trudeau also said companies in Canada's energy sector understand that the way that people invest is changing, and they'll have to change as well. Energy companies such as Cenovus have committed to either achieving net-zero emissions or adopting what's known as ESG (environment, sustainability, governance) policies.

Environmental groups applauded the pension fund's decision. Richard Brooks, Stand.earth's climate finance director, said it's the first state fund to divest from the oilsands and it's "no small matter."

"It's time to pivot to clean, safe renewable energy. That's where the smart money, led by New York, is headed," Brooks said in a media statement.

Lise Ravary: Surrounded by graduates of the School of Medical Nonsense

Google to set up $735 million data centre in Beauharnois

Manitoba expands COVID-19 vaccine eligibility to 30 and up

Bergevin: Cement plant near L'Orignal would hurt the environment, and humans

Alberta opens COVID-19 vaccine eligibility to anyone 12 and older

Paddington overtakes Citizen Kane to score a perfect Rotten Tomatoes rating, thanks to one bad review

Québec solidaire would not extend Bill 101 to CEGEPs, but has a plan for Montreal

Suspected targeted shooting in Burnaby, B.C., might be linked to YVR attack: police

How communities can fight the stigma that isolates people with dementia

One dead in shooting at U.S. immigration office in Orlando, suspect in custody -police

Seniors have a right to express their sexuality in long-term care homes, but staff need guidance

After a year of Zoom meetings, we’ll need to rebuild trust through eye contact

What’s behind the latest clashes between Israel police and Palestinians in Jerusalem?

WARMINGTON: It was a hateful assault of a man right in front of me. But was it hate?

SI Swimsuit Issue moves from Bali to the Boardwalk

Boy, 10, seriously injured after being struck by vehicle: Oxford OPP

England will further ease COVID restrictions from May 17 – UK PM

B.1.617 variant first identified in India classified as variant of global concern