SYDNEY, N.S. — Police in Newfoundland and Labrador say two people were swept out of residences that collapsed into the sea as post-tropical storm Fiona hit Saturday.

RCMP Cpl. Jolene Garland says one woman was rescued by local residents in Port aux Basques, N.L., and is believed to be fine after receiving medical attention.

“We have a report about another woman who was believed to be swept out into the ocean as her residence was damaged as well — apparently swept out from the basement,” Garland said. “We haven’t been able to verify a status on that woman.” She said storm conditions are too dangerous to conduct a search.

Towns in Cape Breton and on Newfoundland’s southwestern coast declared states of emergency as post-tropical storm Fiona — one of the strongest storms to ever strike Eastern Canada — continued to lash the region Saturday. 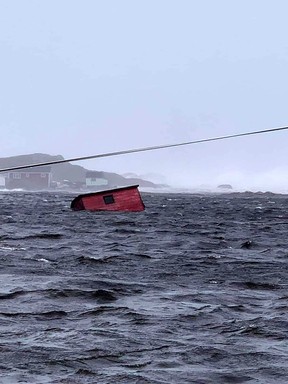 Rene Roy, editor of the weekly newspaper in Port aux Basques, said he saw evidence that nine homes, including a two-storey apartment building, were washed out to sea by a massive storm surge and wind-driven waves that soared about 25 metres into the air.

“Lower Water Street is devastated with damage,” said Roy. “There are homes gone. There are homes in the street …. The RCMP are actively investigating whether people have been swept away.”

Brian Button, the mayor of Port aux Basques, pleaded with residents not to roam around and urged those at risk to seek higher ground.

“So anybody that’s being told to leave their homes, you need to leave,” Button said Saturday during a Facebook Live broadcast. “There are no ifs, ands or buts, you need to leave.” He warned if they didn’t go, they might find themselves cut off.

“A house can be replaced but you can’t be, so you need to go and we’ve already had houses and things that have been washed away, so we need you to go now,” Button said.

Fiona was churning out hurricane-force winds at about 150 kilometres per hour when it made landfall around 4 a.m. in eastern Nova Scotia, between Canso and Guysborough. The brawny storm has knocked out power to more than 500,000 homes and businesses across the Maritimes. 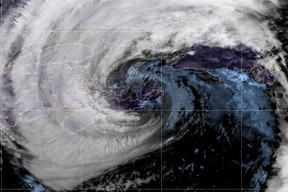 The Canadian Hurricane Centre in Dartmouth, N.S., said Fiona set an unofficial record for the lowest-ever barometric pressure for a tropical storm making landfall in Canada. The recorded pressure at Hart Island was 931.6 millibars.

“The pressure of a storm is a very good indication of its intensity — how strong and intense the winds will be,” said meteorologist Ian Hubbard. “The deeper the pressure, the more intense it’s going to be.”

The Halifax Stanfield International Airport reported a gust of 109 km/h at 3 a.m., and a gust hit 135 km/h at the mouth of Halifax Harbour. As well, a gust reached 161 km/h over Beaver Island, N.S., which is along the province’s eastern shore. In Sydney, N.S., gusts hit 141 km/h at 3 a.m. local time, causing severe damage to some homes.

“We’ve had several structural failures,” said Christina Lamey, a spokeswoman for the Cape Breton Regional Municipality, adding no one was hurt. She said it was unclear how many homes had been damaged, but there were reports of collapsed walls and missing roofs.

“The first responders are really stretched right now. We want people to stay off the roads,” she said. “Most of the roads have hazards on them, with power lines down and trees down as well.”

Several dozen people in Sydney were forced to move into a shelter set up inside a downtown hockey arena.

Arlene and Robert Grafilo fled to Centre 200 with their children after a massive tree fell on their duplex apartment, trapping them in their basement unit.

“We heard a lot of noise outside and then we realized that there are a lot of cracks in the house and we looked outside and saw the tree had fallen,” said Arlene Grafilo, 43, as her children — ages 3 and 10 — played in a waiting area set up by the Red Cross.

“We were trapped and we couldn’t open the doors and the windows, so that’s when we decided to call 911. The children were scared,” she said, adding firefighters eventually rescued them.

As of 11 a.m. local time, Nova Scotia Power was reporting 406,000 customers were in the dark — almost 80 per cent of the homes and businesses it serves. 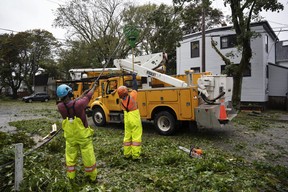 On P.E.I., Maritime Electric was reporting that 82,000 of its 86,000 customers were without electricity, and NB Power reported 54,000 New Brunswick customers without power, most of them in and around Moncton, Shediac and Sackville.

People in Charlottetown woke up to howling winds, broken branches and downed power lines Saturday morning after a night that saw sheets of rain envelope the city.

At the Charlottetown airport, the wind was gusting at 120 km/h at 10 a.m. local time, and a 150 km/h gust was recorded at the eastern edge of the Island at East Point.

Steve Clements, who spent the night at Jack Blanchard Hall, one of Charlottetown’s temporary shelters, said he was thankful to be “out of the elements.” He said most other shelters are open from around 8 a.m. to 8 p.m., which is inconvenient during a major storm. 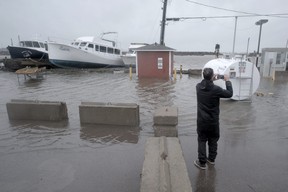 Meanwhile, parts of eastern Nova Scotia and Prince Edward Island have recorded 75 to 150 millimetres of rainfall. Final totals have yet to be tallied. 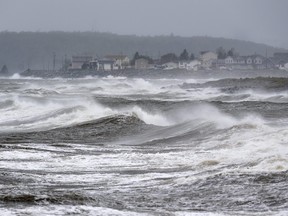 — With files from Michael MacDonald in Halifax, Hina Alam in Charlottetown and Sidhartha Banerjee in Montreal

Russia won’t stop strikes until it runs out of missiles, Zelenskiy says

Russians who fled draft in no hurry to return from Georgia

COP15: Why the world needs a new deal to protect nature

Montreal weather: Monday is for Martians

Hanes: Quebec's appeal of racial profiling judgment out of step with the times

Delean: Life partners generally not responsible for each other's debts

Democrats kept the Senate this year, but 2024 may be harder

Water levels in Zimbabwe’s biggest dam too low for power

Japan births at new low as population shrinks and ages

Polio is back in Indonesia, sparking vaccination campaign

Soccer-Germany bask in the sunshine of Fuellkrug’s Indian summer

Dollar slips, while yuan slumps on COVID unrest in China

China’s protests over lockdowns spread to campuses and communities abroad

In The News for Nov. 28: It is the expert’s turn at the Emergencies Act inquiry

Soccer-France looking to strike the right balance for Tunisia game